The Premier Men’s T20 campaign is over after losing their semi-final match to Lancaster Park at Garrick Park Thursday night.

Sydenham won the toss, invited Park to bat first, and then got off to a pretty good start when Tommy Agnew got the first wicket at 19/1 in the 4th over. However, Park’ English opener Hudson-Prentice, together with Michael Davidson, slowly took charge to guide their team into a strong position. The ultra-consistent Davidson in particular was commanding in his ability to repeatedly find the gap between boundary riders, and at 94/1 off 12 overs, Sydenham were in trouble with Park looking at a score of 160-170, something rarely chased down at this level.

However, when Hudson-Prentice fell at the score, the Sydenham bowlers did a good job of containing the remaining batsmen and restrict the final score to 139/3. Mitch Gardner and Tom picked up a wicket each, with the other a run-out by Connor Marshall.

Connor Marshall flights another one to Davidson

The Sydenham reply started well with TJ Johnson and Chad Bowes putting on 32 for the 1st wicket off just four overs. Chad, back in the side after a feast of Canterbury Super Smash T20 matches, highlighted the first class level batsman’s ability to take a single off nearly every ball whenever a boundary opportunity did not present itself, and between him and TJ they had the team well on track. However, after TJ fell for 14 off 11, there were no more partnerships of substance. 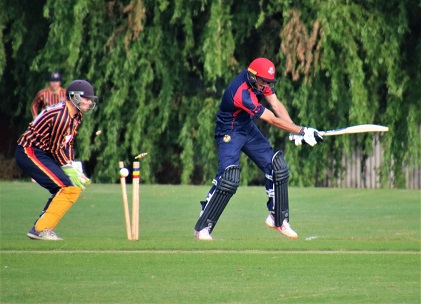 Chad Bowes beaten by the lack of bounce

With the score at 50/3 Chad was dismissed for 29 off 24 balls by one that seemed to keep low as he attempted to work another single, likewise when Chris Harris suffered a similar fate a few overs later, the required run rate was into double figures and at levels that the middle to lower order couldn’t resurrect. With Hayden Day unable to bat due to an arm injury when fieldng, Sydenham finally finished 50 runs short at 90/9.

In the other match St Albans just managed to get up to beat BWU, and thus setting up a home final against Lancaster Park at Hagley which is fitting as they have both been clearly the best two sides in the competition and having contested the one-day final as well. From a Sydenham perspective, although disappointing not to have made the final, the Prems final placing was a fair reflection of a solid performance by the guys that just missed some consistency across the batting in particular to be able to make that final leg higher.

After the two earlier matches in October, our next match on Saturday sees the return of the two-day competition which currently has Sydenham sitting in 2nd place just behind St Albans who we play in a top of the table clash at Sydenham – the match will be live streamed as usual.