Saints on Top After Day One

Matt Loose’s 179 for the Presidents Cardinals in a losing effort was the highlight of Saturday’s round of matches, the Prem men aren’t well placed, and the Prem women lost, but Div 1 are looking good in their match.

The Premier Mens match against St Albans at Sydenham had both sides keen to bowl first with a slight green tinge and moisture evident suggesting some early movement. Unfortunately Saints was the one who managed to win the toss and had the opportunity exploit those conditions.

It turned into a day where Sydenham never really got a toe hold into match at any point. The conditions required some early dogged defence to survive but the Saints bowlers were aggressive and accurate, and the Sydenham defences lacking. We were quickly 3/27 inside the first 12 overs and remained on the back foot the whole innings. Taylor Irie, with a disciplined 25 off 74 balls, was the only one of the early batsmen who looked to have some control, as did Martin Stretch is his first Prem match of the season who scored a 20 of 74 balls further down the order as the conditions flattened out. Aside from a couple of 14’s from Jamie Hunt and Tom Agnew there were no other scores of note and the side was eventually dismissed for 120 off 55 overs. 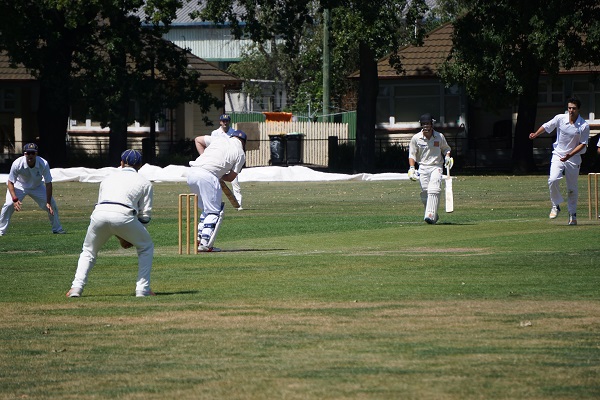 In contrast conditions seemed to be made for batting when Saints had their turn at bat in the afternoon sessions. Although Mitch Gardner picked up the opener Sharples early with the score at 2, Greg Dawson then set himself about building an innings. Ryan Wallace managed to get rid of the dangerous Lortan with the score at 40, and Connor Marshall got another at 67, but Dawson was looking increasingly dominant. As the occasional other wicket fell the St Albans middle order still got their twenties and thirties and supported Dawson through to his 100* at the end of the day’s play as he walked off with the score at 230/6 in the 47th over. 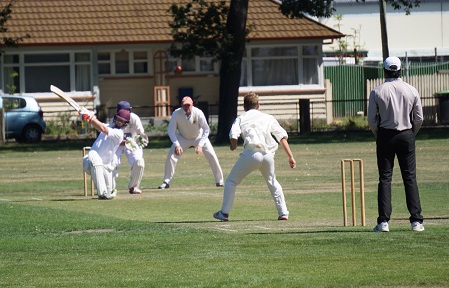 The match is left with alot of work for the Sydenham batsmen do next week where there can no doubt that survival is what matters most. Scorecard: https://www.crichq.com/matches/714581

The Premier Woman were up against the strong Lancaster Park side at Garrick Park and batting first complied a competitive score of 181/7 thanks to Jodie Dean (66), Isla McKenzie (23) and Erika Ode (21). However, Park were strong in reply scoring 182/6 with Alana Topping the best of the bowlers with 2/33 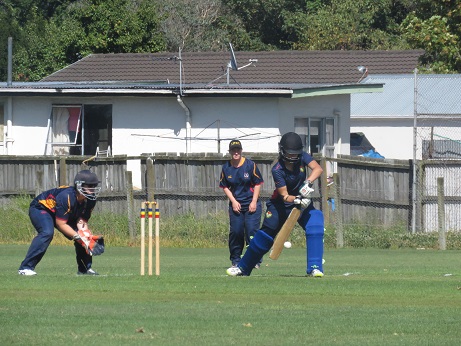 Jodie Dean during her 66 at Garrick

Division 1 in contrast were in a strong position on the first day of their match against BWU at Burnside Park. Scottie Grose’s 4-13 saw BWU falter early when batting first and were bowled out for 105. In reply Sydenham were 184/3 with 6 overs remaining in the first innings. Top run scorers were Sahan Perera (87*), Peter Southy-Jensen (49) and Gaurav Dudeja (30) 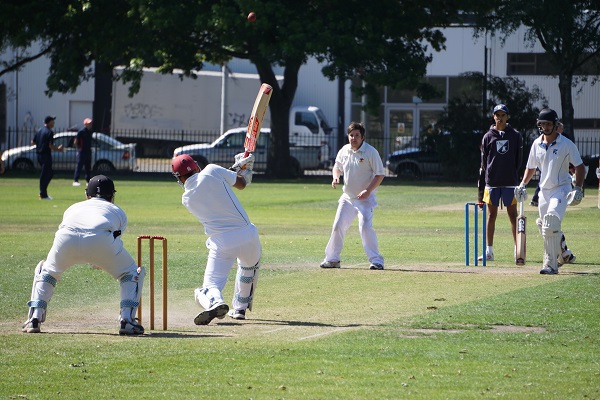 The Div 4 Goats make it three in a row when they skittled Lancaster Park for 51 on Woolston Park. Skipper Jon Bennett was the main destroyer with an impressive 5-5-10, and Nadeem Aslam 3-22-5. The Goats were untroubled in reply with Heath Sanders (28*) and Andrew Douglas (21) guiding them home and back to Sydenham for a drink by 4pm. https://www.crichq.com/matches/715111/1st_innings

Div 6 had its local derby that finished in a rare result as the All Stars got up to beat the Cardinal’s. Batting first the All Stars Cameron Hatcher (38) and Chris Reeve (28) got the bulk of their score of 141/9 (Ben Larter, Jamie Livingstone & James Gallagher getting two each) and then held the Cardinals to 109 (Cam Rendall 27). https://www.crichq.com/matches/715165/1st_innings

Div 8 Tamils XI lost their match against The Buffaloes C at Barrington Park – scores: Buffaloes 162 all out and Tamils 129. No details available as the Buffaloes are another team without the courtesy to input both teams player stats https://www.crichq.com/matches/715516/1st_innings

The Presidents Cardinals had a special match being the first time the new The Lawts Trophy has been contested. The club lost Brendon tragically last year, and in recognition of the fact that since Lawt’s cricket career started at Hornby before coming the Sydenham via Marist, the trophy was created to be contested twice a year when the two teams play. And it proved to be a match worthy. 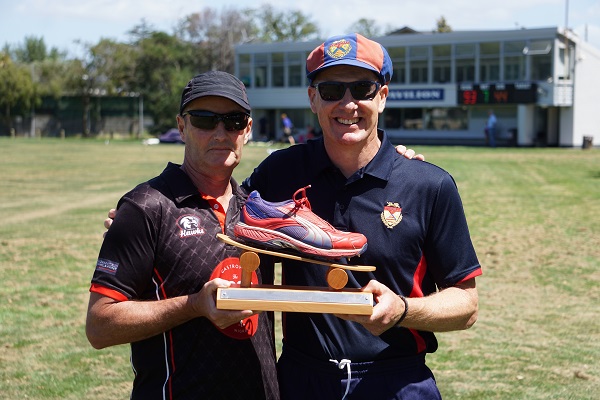 The respective captains before the match

Sydenham batted first and thanks to a run 2nd wicket partnership of 239, Sydenham ‘s 258/1 set Hornby an intimidating target. 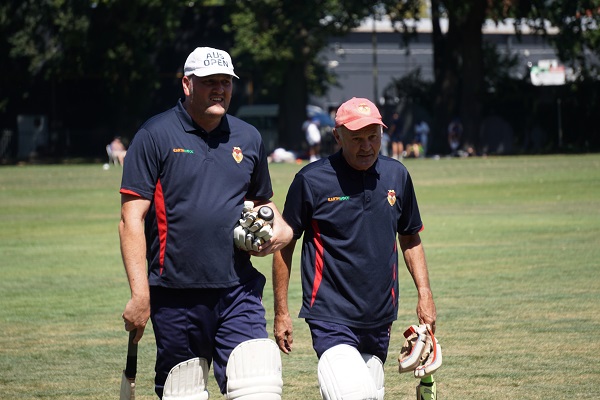 Matt & Spencey 239 runs to the better

Matt Loose was the powerhouse of the innings with a magnificent 179, and backed up the man with the best view of it, opener Ewen Spence with 68*. However, Hornby were equally magnificent in reply with Darryn Ingram scoring a 191 to get Hornby through to the target only four down and with three overs to spare. https://www.crichq.com/matches/715258/1st_innings 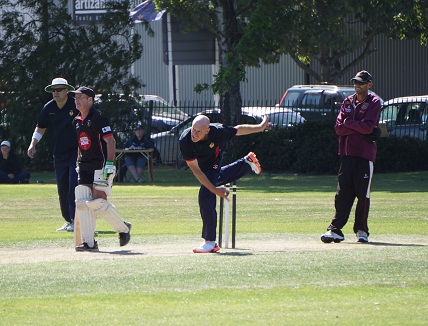 Ingham watches as Kev Moore tries to get the break through

Hospital fresh off their Noel Moorehead Trophy victory the previous week couldn’t continue the momentum as they lost to East Shirley at Burwood. The Easts 75 run opening partnership paved the way for a score of 170/6 (wickets two each to James Barkhuien and James de Costobadie), one that is usually very gettable on Burwwod 2 & 3 in the after Christmas dry conditions. However Hospital couldn’t get the same start and could only muster twenties and thirties and were eventually 35 runs short at 135 all out (run scorers Pieter & James Barkhuzen 30 & 28 respectively, and Richard McKinlay 24). https://www.crichq.com/matches/715409/2nd_innings

The Youth Womens Stars let one slip in their match on Sydenham 2 against Northwest Women. Bowling first they had the opposition close to bowled out for around 60 before a late wicket partnership got NW up to 121/8. Wickets were shared two a price to Broadicea Lynch, Harriet Fletcher & Kate Cameron. In reply Sydenham collapsed to 24/8 at the close. https://www.crichq.com/manage/fixtures/859617/scorecards

The first innings of Sydenham Youth 1st XI was wrapped up quickly on the second day of their 2 day match against Timaru Boys High School 1st XI leaving a substantial 89 run deficit. Although Sydenham bowled well in the Timaru second innings taking regular wickets (T. Owens 2/17 (6), S Coughlan 2/41 (9), D Watt 0/11 (6)), and with a good keeping performance by Ben Mason limiting extras, their declaration at lunch on 111/7 meant a decent target of 199 for Sydenham to chase. 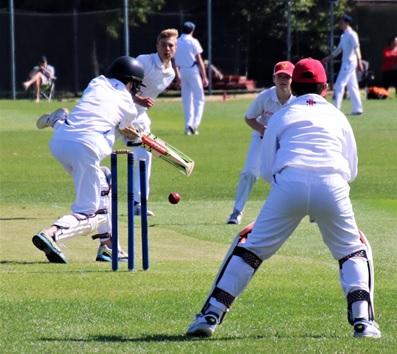 Isaac Milne takes one of his three wickets

The openers Ollie Smith (14) & Isaiah Prasad (12) put on a handy start, but after their dismissals there wasn’t a lot of further resistance in the batting and against several good opposition spinners on a slow Cashmere High pitch, Sydenham only managed to creep to 61 all out. So a disappointing overall result in the first outing of the year, but there were positives and other learning from the game which we can take into next week’s encounter against Christ’s Colleges 2nd’ XI. https://www.crichq.com/matches/713009/1st_innings 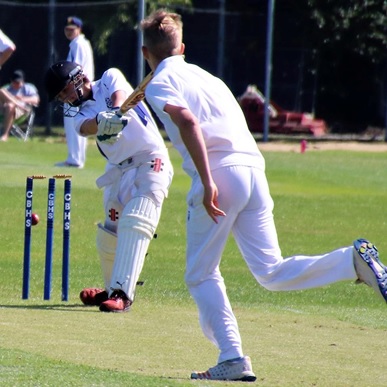 Needing only 2 wickets last Saturday to complete a innings victory over Chch Boys, Sydenham had suggested the two teams play an extra half an hour. Chch Boys High (probably praying for rain yesterday) politely declined this offer and the teams reassembled yesterday at Boys High for day 2 of their match at 10.30am

Thirty minutes later the teams were packing up after 6 overs had been bowled and as expected Sydenham had taken the 2 wickets necessary to win the match. It was incorrectly reported last week that this was a “social” match when in fact it was round 1 of the competition. https://www.crichq.com/matches/712966/1st_innings