Only three runs stood in the way of a clean sweep of the three Sydenham matches that did manage to get a start on Saturday, with all other afternoon grades, including the women, cancelled due to the weather.

The Div 1 boys had a convincing first up win over Halswell, and whilst Div 2 would have clearly preferred to have played, they were more than happy to take the points after St Albans defaulted to them pre-match. Unfortunately it was the Premier Men that pulled up just that three runs short in their match.

The Prems were set to play Heathcote at Hagley 4 in Heathcote’s first Prem match since their promotion last season. However much of the day was spend waiting for conditions to improve but eventually play got underway before 3pm in a reduced 22 over contest. Sydenham won the toss and asked Heathcote to bat. 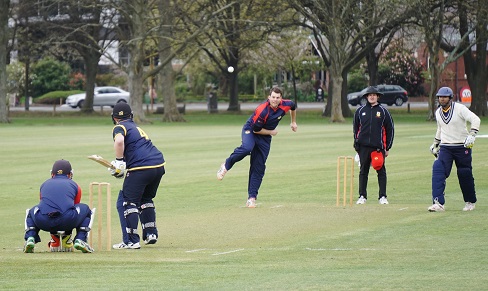 TJ the best of the bowlers against Heathcote

And they started well getting to 31 in just the 3rd over before Mitch Gardner took the first wicket. Heathcote kept the momentum going but regularly lost wickets whilst trying to maintain a plus six run rate before eventually closing at 131/5 in the 22nd over. On a day in which Heathcote also later showed were the best conditions for the slower bowlers, Tim Johnston with his 2/19 off 5, and Chris Harris 2/20 off 4, were the best of the Sydenham bowlers. 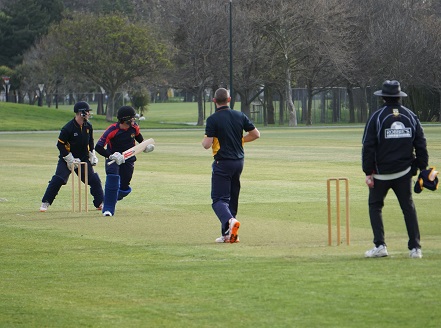 Tom McDonald clips one behind square

Set 132 to win, Sydenham lost Toby Mowat in his first match for Sydenham with the score at 14, but Chad Bowes was looking comfortable, and Tom McDonald equally so in his Sydenham debut match. When Chad (19) went with the score at 44/2, Aditya Edekar, another in his first match, had a brief stay for 6 before Ryan Wallace joined Tom. Tom was taking full advantage of his 1st team opportunity as the 4th wicket partnership between these two started to get Sydenham into a dominant position at 88/3. But from there the innings wilted – although well established both players were gone within 3 overs for only another 12 runs, with Tom [33 from 41] and Ryan [24 from 33]. The middle order then failed to recover the position and it was left to the last pair of Taylor Irie and Mitch Gardner to try to get the last 14 runs off the final over, falling just 3 runs short.

So a disappointing start but also some useful early season signs for the likes of Tom McDonald, Ryan Wallace and TJ. The result was a thrill for Heathcote who fought their way back into the match to deservedly secure their first ever Premier win at their first effort, but some comfort also in that two of the four Prem matches were rained-off and points shared. St Albans was the only other side that managed a win against Riccarton, the latter whom we play next Saturday at Riccarton Domain, hopefully in more cricket suitable weather.

Whilst the Premier Mens and Womans teams are the prime focus of any club, this season Sydenham’s attention is also very much on the performances of our reserves in what looks like a very competitive Division 1 competition – unashamedly we want to see our Premier reserve team playing in The Championship next season, and performing like a team that deserves to be there. With some quality young players joining the club, and Kelvin Scott’s experience back leading the side, expectations are high and they certainly got encouragement after a great start with this match.

Playing Halswell on Sydenham 1, there was also delays but eventually play got underway in the early afternoon with a 35 over match with Halswell batting first. After losing an early wicket with the score at 4, Halswell recovered and looked comfortably placed at 60/2 before Charlie Finnie struck with the first of his two wickets. The innings then faltered as another 4 wickets fell for less than 20, and finally closed with the score at 136. Wickets were shared around with Sydenham newcomer Josh McArdle impressing [2/18 off 6.3], with Saran Perara [3/35 off 7], Preetham Pagadala [2/17 off 5] and Charlie [2/14 off 6] also starting the season well. 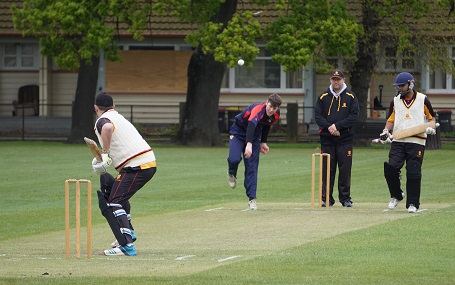 Matt Day’s wicket was lost early in the reply, but Skipper Kelvin Scott (37) kept the innings on track when he was joined by Josh McArdle. The two then batted though until Kelvin’s dismissal with the score at 60/2. Josh carried on to 88/3 before his dismissal for a well constructed 35 from 60 balls to complete a great start in his maiden Sydenham match. Despite another couple of quick wickets Pankaj Bhagat played a mature innings of 35 off 56 to steady the ship and work the score through to 131/6, and with his dismissal, Zack Scott-Howman finished the match off in the 33rd over with his 16*. 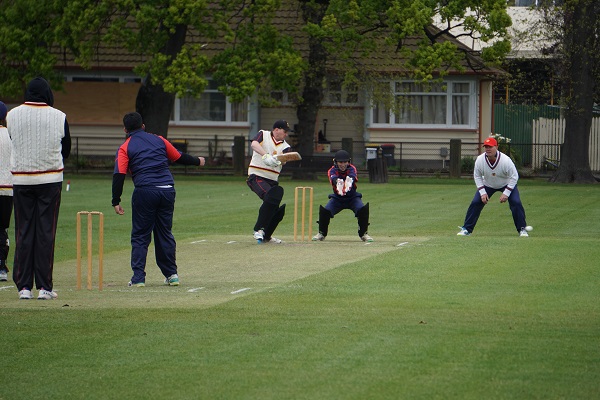