Saturday was excellent day for the club with many teams getting wins in their first matches of the season, and with two centuries and a hat trick dominating some of those matches.

Although the Women lost, the Premier Men had great win thanks largely to another Chad Bowes century, the Div 1 boys continued on their way with a victory and a hat trick to boot from Quentin Mcintyre. And down the afternoon grades the highlight was an impressive early season 148 from James Barkhuizen in Hospital’s win.

Still smarting from their last over, three run loss, to Heathcote in their opening match, a solid performance was needed from the Prem men to get some early season momentum as they took on Riccarton at Riccarton Domain. Overnight rain again saw the 50 over match reduced to 38 overs and then TJ winning his second toss of the season. And despite some mixed views on the subject amongst his team mates, he elected to bat first on a dry and well grassed wicket, a captain’s call that largely paved the way for the win. 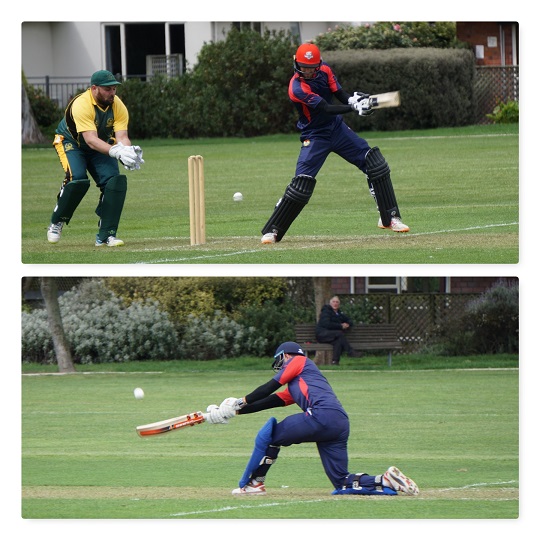 The Sydenham innings was dominated by the opening partnership of 149 between Chad Bowes and Englishman Toby Mowat. Chad, relishing another opportunity for a couple of matches before Canterbury’s season opens soon, constructed a beautiful innings typically full of elegant drives, and carefully worked singles interlaced with the occasional one put over the top. Chad’s 103 from 87 balls certainly didn’t overshadow Toby’s 65 from 80 balls which was equally impressive and confirming just what a quality addition he is to the team this season, both on and off the field. With a competitive score assured, some of the latter batsmen succumbed in an effort to further accelerate the run rate for their side, with TJ’s 27 the score of note down the order. 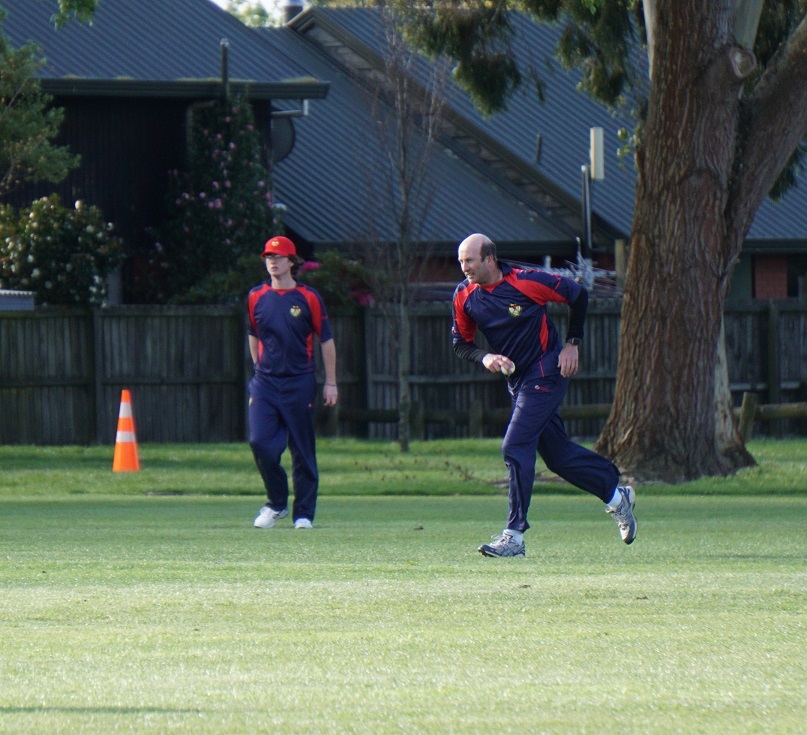 Harry starts the season with a four'fa

Whilst the final score of 235/6 off 38 overs was going to be a challenge, to their credit Riccarton had produced an excellent early season wicket on the domain, and with a surprising fast outfield considering the earlier rain, a victory was not assured. However, in the early overs Mitch Gardner and Toby Mowat made that run chase all the more difficult when they set Riccarton back on its heels at 24/3, and then 44/4 when Mitch also skilfully ran out Laffey. Never one to play a bit part in a match, Chris Harris then dominated the rest of the proceedings with best match figures of 4/29. There was another sharp run out by Chad later in the innings as the inevitable run rate pressure came to bear, and then after a gallant last wicket partnership of 53 by the tail enders, Riccarton fell 117 runs short at 118 all out.

Although a couple of catches had gone down, there were also a couple of excellent ones taken. The ground fielding was excellent, the bowling more than competent, and the batting another leg up from the first up effort last week. The team’s next match is a much awaited, and hopefully warmer, home match at Sydenham against East Shirley.

Our Premier Women had their first game of the season. With the morning drizzle a start time of 1:30pm was agreed and the game reduced to 34 overs but Sydenham had an uphill battle ahead of them with experienced players Carolyn, Bernie and Jodie, and key wicket taker Gina, all away.

Batting first the openers fell quickly leaving Sydenham at 3-2 and with a lot of work to do. The Magicians pace bowlers Georgia Edge (3-9) and Gabby Sullivan(1-20) were testing, and while some of batsmen looked like they might pull through, none managed to take advantage of their lesser bowlers. Jenna Waghorn top scored on 17 followed by Eden Pettigrew on 12, but the clear winner was wides with 23 making up a large portion of our 86/10.

The bowling attack also had a hard job ahead of them with St Alban's Magicians player Natalie Cox (56) making easy work of it on the artificial pitch. And while we only bowled 4 wides we just couldn't break the opening partnership as St Alban's failed to lose a wicket in their win.

Next week the team takes on Lancaster Park in their first game on grass. Hopefully the lower bounce on grass is better for our bowlers.

The Div 1 boys followed up their first match victory with an even more impressive effort in their second match against Heathcote on Sydenham 1. Heathcote won the toss and may have regretted their decision to bat first as they lost early wickets to find themselves 36/5 in the 15th over. Charlie Finnie [6-2-14], Josh McArdle [4-1-9], and Dave Simpson making his Sydenham debut [6-2-27], were the best of the early bowlers, but it was Quentin McIntyre who did the bulk of the damage. Quentin, also playing his first match for the club, took the fine figures of 5/20 including a hat trick as he bundled the last of Heathcote boys out for 87 in the 29th over. 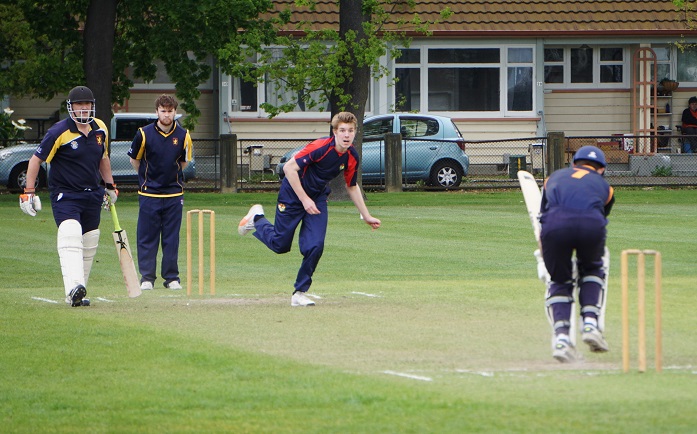 Quentin McIntyre has immediate success in his first match for Sydenham

The Sydenham first wicket fell at 23 in reply, and although Sahan Perera, Matt Day and Josh McArdle all failed to get to double figures, Kelvin Scott’s 22, and more particularly Pankaj Bhagat’s with another solid 31*, saw the side safely through to 89-4 and the win. The side now plays the other unbeaten side Merivale Papanui next week at Bishopdale Park 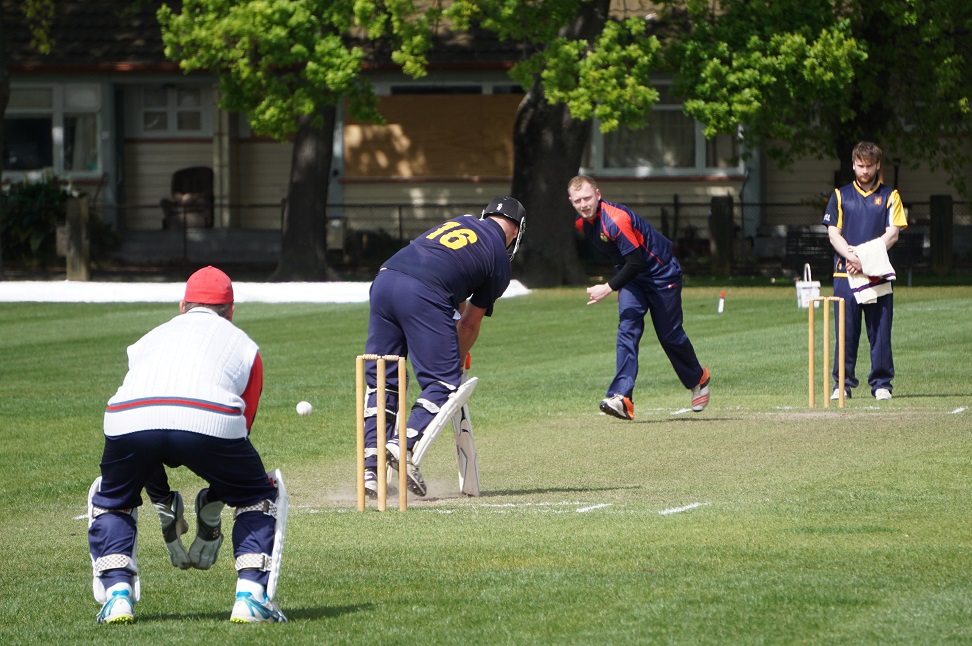 A Heathcote batsman digs one out from Scott Grose

Sydenham won the toss and elected to bowl in their match against Hornby on Denton Oval. However, that was as close to a win as they got as Hornby went on to compile 212/8 in their 40 overs. Paddy Wickes [8-3-35] was the best of the bowlers, with a couple of wickets each from David Brostow [5-2-42] and Gaurav Dudeja [7-2-44]. Sydenham fared little better with the bat with the skipper Marty Crooks’ 11 runs being the top score as the team was bundled out for 66 in the 24th over.

Championship winner last season, the Goats got off to a slow start this season when they went down to Easts on Centennial Park. Easts lost the toss and batted first and managed to get through to 138/7, often a more than a par score Centennial. Wickets were share evenly with two apiece by Chris Douglas, Alex Brailey and Daniel Loughton. Sydenham could then only muster 94 all out in reply with Jacob Harrington (17) and Ollie Philpott (18) the only players reaching double figures.

Across the park from the Goats, the All Stars got their season off to a start with a good win against Scots Raiders. Sydenham won the toss, batted first and got off to an average start until Gourav Saini came to the crease and topped scored with 48. Chris Reeve (15) and Vishal Makwana (15) were the other scorers of note as the All Stars got through to 128 all out. Gourav then took the ball, and with his 7-3-27 and Satvik Saini’s 6-3-21, the pair held Scots to 119 to take the win.

The Tamils were another team with a win in their first match when they took on Merivale Papanui at Centennial Park. Asked to bat first Sydenham got away to a poor start but Vignesh Deve’s 45 got the innings back on track, and coupled with other scores, notably John Emmanuel’s 28, got the side through to 135/9 in their 40 overs. The Tamils then bowled MP out for 87 inside 35 overs with each of the first four line bowlers getting a couple of wickets each.

The Cardinals decision to move to T20 this season immediately paid off with a big first up win against St Albans at Bradford Park. Winning the toss and batting first, the Cardinals compiled a solid 99/7 with Kieran Willams (24), Geordie Dann (19) the best of them. St Albans could only score 41/8 in reply with Keiran, James Gallagher & Scott Alexander all getting a couple of wickets each.

The Cardinals had a first up loss when they played a very strong East Shirley Black team on Burwood, apparently a new team to the grade that was returning to the game. Asked to bat first they lost opener James McKay early, but then Ewen Spence (21), Phil Walker (40) and Dave Hardy (40) got them into a position of strength at 90/2. However, once the latter two were gone no one managed to get double figures and the innings faded to 160 all out. In reply a strong opening partnership saw Easts untroubled reaching their target at 162/5 with 8 overs to go. Warren Guy and Dave Fleming with two wickets each were the best of the bowlers, with Wazza perhaps a touch unlucky not to have included a hat trick in his tally.

James Barkhuizen’s 148 dominated Hospital’s first match of the season against Lancaster Park. Park won the toss and possibly regretfully asked Hospital to bat on an excellent early season wicket on Sydenham 2. As good as the Prem Mens 149 opening partnership was, James and Bruce Day (67) blitzed that by putting on 205 for the first wicket, and with Pieter Barkhuizen adding a 35 down at no. 5, the side closed its innings at a challenging 292/3. Pieter and James then took the balls and knocked the top off the Park batting as Park struggled through to 129/8 at the close. Pieter finishing with 8-3-20 and James 6-2-6.

The Youth Stars played OBC on Elmwood with Sydenham batting first and Darcy Prasad (11) and Dakoda Potter (2) getting them off to a start while the rain fell. An unfortunate mix up saw Darcy run out before Maddie Iro stepped up well putting on 37 runs off 72 developing good partnerships with Sophie George (12) and Livvy Crowe (11). These partnerships put us back in the game with Kate Cameron (7) playing perfectly with some very good straight shots.

OBC's strength is their batting and Sydenham hung in there extremely well. Their top four all got starts but were never allowed to get away. Oliva Crowe opened well with Emma Begg who was a star in fine leg. Kate's first over was a maiden and at one stage had 3 for none after 2. Sophie George bowled well, and Maddie made the important breakthrough, but it was Dakoda's 2nd over that swung the game our way. Darcy kept extremely well giving away no byes with all the extras being wides (the OBC keeper gave away 16) and getting a run out!

The Youth First XI got their Term 4 season underway will a slightly tense one wicket win over the Christchurch Boys High School Forth XI on a lush Sydenham 3 where boundaries were scarce. After a 30 minute delay due to a wet outfield, CHBS won the toss and choose to bat. Surprisingly, for our opening bowlers they didn’t take a wicket in their first spell which is unusual. It took the introduction of Jamie Ehau into the attack to pick up the first wicket when CBHS had put on 47 after which wickets then fell on a regular basis until they were all out for 140 in the 40th over. Daniel Watt 3/19, Jamie Ehau 2/16, Ben Wasley 2/22 and Ollie Smith 2/35. Into bat, our opener Archie Goodrick made the earliest running for unluckiest way to get out for the season. Having missed a leg glance, in completing his pirouette decided to spin his bat in his hands like a tennis player would awaiting a serve, proceeded to drop it and watched it hit his stumps. CBHS appealed, the umpire raised his finger, Brexit type negotiations then ensured and eventually he was on his way. Useful contributions built around Isaiah Prasad’s well-constructed 55 saw the team get through to 124/7, 134/8, 137/9 before “the Bens” (Wasley and Mason) got the team home. 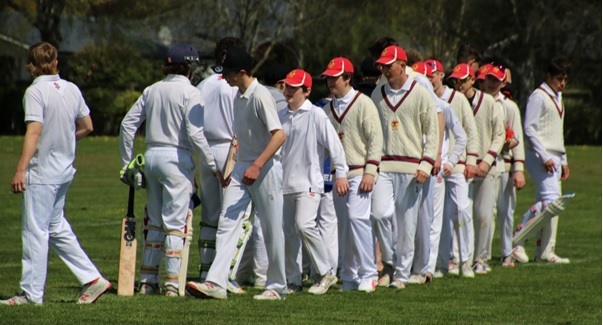 The Year 10 Colts took on St Bedes at Cashmere High.

The home team won the toss and (oddly?) elected to bat. Dallas Crowe scored 16, E xtras scored 8, the rest the team scored 16 between them for a total of 30. St Bedes knocked off the winning runs for the loss of one wicket.

The Manager has flushed the dunny and told the team to move on.