Saved by the Bell

In sport as the saying goes, it’s never over until it’s over, and that certainly proved true for the top two men’s sides on Saturday as they both had to extract themselves from tight positions to win their respective matches. The Prem woman again struggled, and whilst many of the afternoon were cancelled due to the week’s inclement weather, Dave Fleming with his 6/28 will be pleased that some were able to be transferred to the few available artificials.

The Premier men were finally onto Sydenham Park for the first time this season and up against a very strong Easts side with all four of its Canterbury players in their side. In a now familiar theme, the first half of the day was spent mopping up wet spots, patiently waiting for the pitch surrounds to improve, and speculating on likely start times and overs of play. Play eventually got underway at 2pm in a reduced 32 over match.

Easts won the toss, predictably asked Sydenham to bat, and then spent the next 10 overs celebrating that decision as the home team slumped to 31/5. Toby Mowat was first to go, rather unlucky given out to a very wooden LBW, but the others in that first five struggled with the more difficult wicket early on. A small recovery to 62 then saw Chris Harris the next to fall, followed a ball later by Matthew Bell, and at 62/7 inside the first 16 overs the match seemed to be already slipping away from Sydenham. 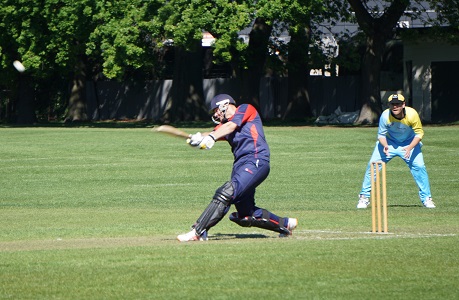 However, the skipper Tim Johnston was still there trying to steady the ship, and then when eventually joined by Lane Tutty, their 8th wicket partnership of 65 started to suggest all was not lost. When TJ fell for an excellent 40 off 51 balls with the score at 127/8, Lane was joined by Tom Agnew who between them pushed the score through to a competitive 157/9 at the close. Although Tom’s was an invaluable cameo of 17 runs at better than a run a ball, which included one massive six over the pavilion, it was Tutt’s 49 off 46 balls that really put the side in a potentially winning position, and again re-emphasised just what a loss he was to the side last season through injury. 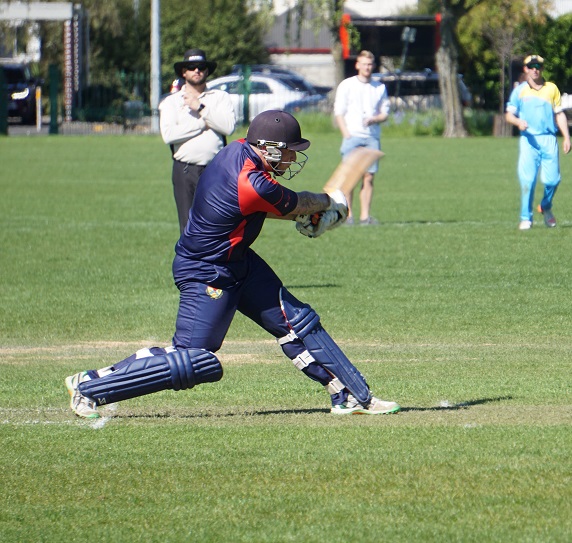 With the wicket playing easier as the conditions continued to improve, the 158 target was probably about par, especially with the strength of the batting Easts on the week. However, at 25/2 Easts didn’t get the perfect start either as Mitch got opener Goldstone, and then Aditya Edekar completed a smart run-out from the deep to exit the other. However, skipper Hampton-Matehe then got together with Canterbury batsman Kenny McClure to swing the match significantly in Easts favour with an effortless 60 run partnership over the next 10 overs.

When TJ finally bowled Hampton-Matehe with the score at 85/3, McClure carried on seemingly in charge but now struggling to find support from the other end as Mitch Gardner came back on for his second spell. The McClure-Coburn partnership started to look threatening until Mitch induced Coburn into a towering skier to mid-wicket – there were several players positioned to attempt the catch, but Matt Bell, who had a few balls early taken a nasty blow to the face in the field, made the decisive call and effortlessly completed the catch. This was a key final moment in the match because, although McClure batted on for a couple of more overs, Mitch Gardner was bowling beautifully and never looked like letting even McClure get the boundaries that were becoming required. Easts finally finished 14 runs short at 143/9 with Mitch the stand-out bowler with his 4/14 off 7. 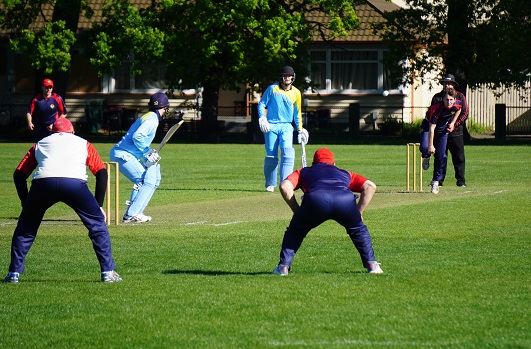 The match takes Sydenham to first equal in the competition, but more importantly, provided an early season confidence boost that the side has the ability to battle through difficult situations to produce a result. Next week doesn’t get any easier, but provides a great chance to see where they are at this early stage of the season, when they take on perennial champions St Albans at home on Sydenham.

The Prems struggled with the bat again when they took on Lancaster Park at St Albans Park. On another week when winning the toss was important, unfortunately Sydneham were asked to bat first ,and despite a 24 run opening partnership between Casey Liddington (24) and Isla McKenzie (14) the side could only muster 56 in their 20 overs. Park then eased their way to the victory for the loss of just two wickets

This was an important early season match for the Div 1 boys up against one of the other unbeaten teams Merivale Papanui on Bishopdale Park. On a poor wicket that had been inadequately covered against overnight rain Sydenham managed to win the toss and insert MP into conditions that were always going to be difficult for the batting side. MP managed to get through to 126 all out, a score inflated by 37 extras (including 31 wides), with Sahan Perara [6-4-19] and Connor Williams [7-3-18] the best of the bowlers.

The Sydenham reply was heavily reliant upon the 54 from skipper Kelvin Scott as the middle order collapsed such as to seriously question the result of what should have been a modest run chase. However, Preetham Pagadala batted very responsibly at No. 9 with his 16* sufficient to get his team to the win with the last pair at the crease. Div 1 have another top of the table clash next week against Easts on Sydenham 2.

In a 35 over reduced match against Heathcote on Sydenham 2, Sydenham lost the toss, were inserted but got the innings got off to a reasonable start thanks to a couple of 19’s from Jaeden Hooper and Andrew Moulton. At 38/1 it was looking comfortable, however from there wickets tumbled and only Paddy Wicke’s 30 batting at no. 10 provided any resistance down the order as the side struggled to 135/9 at the close. 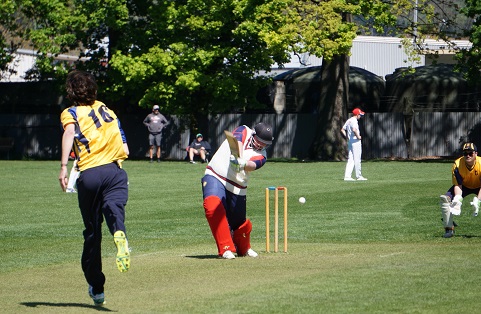 Jaedyn Hopper on the drive on Sydenham 2

The Heathcote reply was always solid with their top order all getting starts, and despite some good bowling from David Brostow [5-3-26] and Abe Atherton [7-1-15] they were relatively untroubled in reaching the target just 6 wickets down in the 29th over.

The Goats got their season underway with their first win against Richmond at Walter Park. A solid batting performance lead by Satpreet Singh (39), Robert Graves (27) and Ollie Philpott (26) saw the Goats through to 149/8 off their 40 overs. In reply Jon Bennett’s 4/12 off 7 overs carved out the Richmond middle order as they succumbed to be all out for 85

The Presidents were another team thankful to get a game in when they got off their duck taking on Lancaster Park on Warren Park. Batting first Anthony Wild (26) and Matt Loose (27) got the side of to a good start but it was Phil Walker’s 55 that was largely instrumental in getting the side through to a competitive 154 all out. David Fleming then ripped the heart out of Park’s reply as the wily old spinner claimed his best figures in a long time of 6/28 to snuff out the innings 54 runs short at 100.

Hospital couldn’t repeat its great win last week when they slumped to a big loss to Sumner at Warren Park. Playing on an artificial, Hospital would have hoped to have done better than their 65 all out after their opening partnership of 24 saw the side away to a decent start. At 49/2 they seemed comfortable before the innings collapsed from there. Sumner were untroubled in reply reaching the total for the loss of just 5 wickets.

The Sydenham Stars had a very good win after they bowled out Halswell for 80 in 26 overs at the Polo Gorunds. All the bowlers contributed to the result with Sophie George [3-2-3] Maddie Iro and Emma Begg both finishing with 2/12. Livvy Crowe, Jaimee Cartwright and Kate Cameron were all extremely unlucky not to get a wicket but all contributed to putting pressure on the batters. Everyone fielded well in trying conditions, often running through large puddles to get to the ball. Darcy Rose Prasad performed excellently as keeper; letting through her first bye of the season and directed the team very well from behind the stumps

Dakoda Potter took a key wicket to turn the game in our direction then opened the batting with Darcy Rose to combine for a steady first wicket of 39 runs. When Dakoda got out Emma Begg took over and blasted a quickfire 18 to finish the game with Darcy Rose on 24; having lost just the 1 wicket and achieving the 81 required in 16 overs.

The First XI meet Christ’s College 3rd XI at Cashmere High. A move to the artificial wicket was needed given rain the day before. Full credit to College, who having lost the toss and being asked to have a bowl came to play, and despite having a wet pitch to bowl on agreed to get underway at 10.30am and got on with the game without complaint. 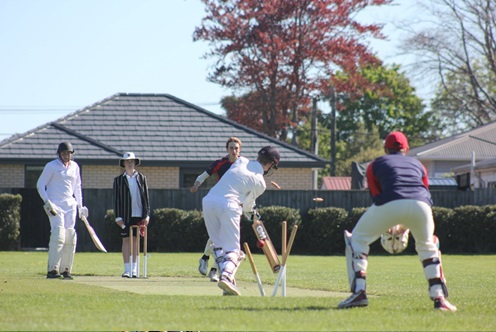 SYD lost their first wicket in the first over, but Daniel Watt (28) and Archie Goodrick (20) put on 26 for the second wicket to steady the ship. Several boys got starts, but got themselves out and at 100/8 the home team were nervous. Sam Prasad (20) and Thomas Owens (21) then put on 41 for the 9th wicket to get the team through to an eventual 149.

Into bat College got underway comfortably and at drinks again the home team had a second nervous moment during the game after two tough chances had gone down in the slips. The first change bowlers Thomas Owens (6-3-7-1) and Ben Wasley (6-0-20-3) then swung the game back in the home teams favour to have College 48-5 and eventually all out for 86, with Daniel Watt 10-2-21-2 and Archie Goodrick 10-2-32-2 taking out the tail.

After a delay in starting play finally got underway at 1:30 with innings reduced to 35 overs between the Year 10 Colts and Christs’ College. All of the bowlers bowled really well this week Isaac Milne was back to his best with final figures of 2/9 off his allotment of 7 overs and accompanying him of the bowlers that delivered was Zack Howe with a tidy haul of 3/25 off his 6 overs as well as creating several other opportunity’s that would have helped restrict CC to a bit less than there final total of 128 / 7 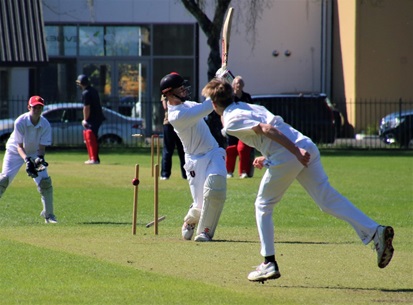 On the return CC tried to help the Sydenham lads out by gifting the first 5 runs in wides before a legitimate ball was bowled - a step above in the field though College’s efforts would help remove 3 of our first 4 wickets with outstanding pieces of work in the field probably would be the difference in the end as the Sydenham Colts ended up being all out with 4 overs to go and falling 36 runs short.

Solid contributions by Issac Milne (20) Jamie Ehau (13) and Charlie Hickey (10) weren’t enough as the loss of early wickets left nothing in the bank for a final change at the achievable total. All in all an improved effort by the lads and a positive step forward.