An Inch the Difference

A great day’s cricket for the two Premier sides with the men coming literally within an inch of victory at Burwood, and the woman peeling off two wins in their T20 matches. The Division 1 boys had an unfortunate start to their T20 competition, whereas Division 2 managed to crawl out of their match with a very nervous draw.

It had been a dismal first day of this match last week against East Shirley at Burwood, with the Prems 102 runs behind on the 1st innings, and just managing to survive the 6 overs in their 2nd by the end of the day. After a run of similar soft batting performances in the past 2-3 weeks one had the feeling that this 2nd innings was critical to the team’s confidence and its season. It required some character and it required some players to take charge. As it turned out that came, at least initially, from three room mates who eat, sleep and breathe cricket, Adi Edekar, Toby Mowat and Ryan Wallace. 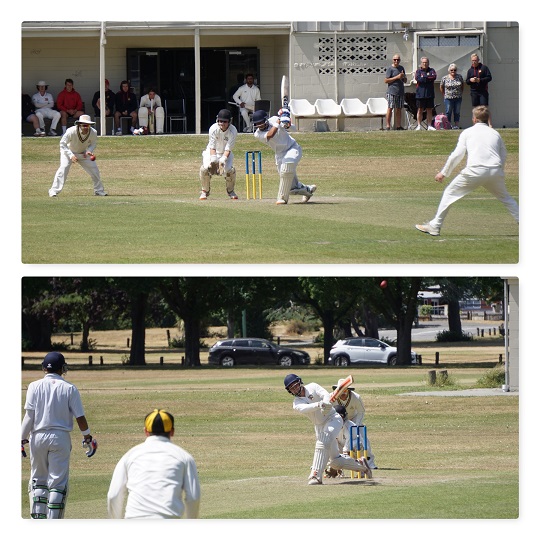 Toby and Adi set about righting the ship and did so with a 126 opening partnership in which both batsmen rarely looked troubled. Toby got his season back on track with an excellent 69 off 116 balls, and then when he left, Adi and Ryan continued to cement the position. By the time Adi was out for an excellent 73 with the score at 182-2, thoughts had turned to the prospects of an afternoon declaration, something that seemed very unlikely at the close the previous week.

Ryan Wallace made sure that happened. One of the few to be looking in decent touch over those weeks, Ryan crafted a 104 that showed much care at the start and then flowing drives towards the end as the declaration was sort. He got good support through some small cameos down the order from Lane Tutty, and especially Charlie Finnie who clubbed 16* off 6 balls with the declaration imminent. That declaration finally coming at 329-8 leaving Easts 228 to win in around 38 overs. 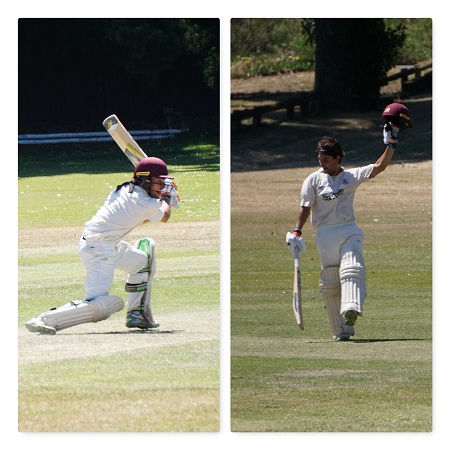 Setting that target was always going to be a challenge for second day captain Lane Tutty with batting conditions superb and Easts with more than enough batting fire power to reach it – but having lost its first match Sydenham had to take risks, as it turned out it was a finely tuned declaration.

Easts started impressively with Hampton-Matahe and Goldstone scoring pretty much at will in an opening partnership of 115 at an RPO of 7 which well and truly set up their run chase. Something had to be done, and it came from young 18 year old Jackson Hemingway making his Sydenham debut, someone you sense who seems to relish an occasion. Jackson snared Hampton-Matehe, caught well by PK on the long-off boundary, and the Sydenham spirits lifted, but even more so when Dave Simpson then took the wicket of the dangerous Kenny McClure 11 runs later.

Although still in the more dominant position, Easts started to wobble just a little. Lane was marshalling his bowlers and fielding resources skilfully, Dave Simpson and Jackson were both giving little away, and Mitchell Gardner was bowling his heart out in batting conditions that left little room for error for the bowler. Mitch’s 47-5 off 14 overs was what turned a comfortable run chase for Easts into a last minute desperate struggle for them to avoid a loss. Mitch picked up wickets regularly through the middle and lower order, and then when Easts lost their 8th and 9th wickets to him with two overs left and 16 runs to get, they finally closed up shop. 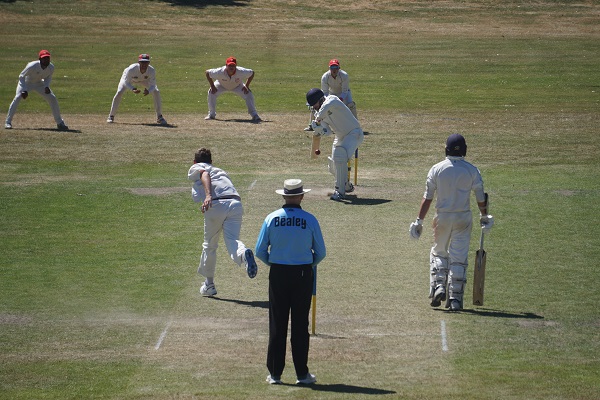 The two remaining batsmen were ringed as Gooday and Michel survived Mitch’s final over, then attempted to grimly defend Ryan Wallace’s final over of the match. The penultimate ball of the match struck the batman close to in line, shaved the leg stump and rocked to the boundary for 4 – the runs didn’t matter, but the predictably massive appeal did – it was declined. Probably a good decision but certainly one where an inch counted for alot as the videos and picture highlights 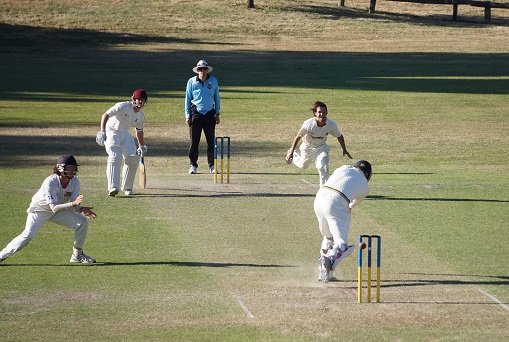 So in the end a draw, but a fair result and an end to an exciting match. Easts had put in a dominating performance the first day, and Sydenham probably won most of the second, neither had deserved to lose. A match for Sydenham that carried alot of positives on the second day; a top order that returned to form with some vengeance, a promising new youngster introduced, promoted Div1 players continuing to contribute when their get opportunities, and the bowling unit never dropped its head.

Sydenham’s next matches are the start of the T20 competition next week playing two matches on Hagley 4, firstly against Lancaster Park at 10.30am and then OBC at 2.45pm

The Prem Woman won both of their matches that were played at Burnside Park. The first against North West Woman saw NW elect to bat first and proceeded to score 114-4 with the Sydenham bowlers featuring being Caitlyn Robertson (4-2-30), Eden Pettigrew (3-1-24) and Boadicea Lynch (4-1-33). The Sydenham reply was orchestrated by Casey Liddington (44 off 42), Jenna Waghorn (27 off 21), Isla McKenzie (14*) and Boadicea Lynch (17). However, when Boadicea was bowled off the 2nd last ball of the match with one run required, Hannah Morrissey came in and drove the next ball for a single to win the match at 115-4.

The second match against OBC was also a close affair with Isla Mckenzie’s 65 off 51 balls dominating Sydenham first innings effort of 122-6 – other scores to Eden Pettigrew (14) and Caitlyn Robertson (10).

Sydenham appeared on top initially in OBC’s reply until Gwen Morgan (UK’s Eoin Morgan's sister) smashed a 41* off 24 balls to almost took the game away from Sydenham. Gwen couldn’t quite manage it but scored 19 runs off the last over needing 23 to win. Key wickets were Boadicea Lynch taking Hayley Aburn in the fourth over, and Amelia Tainui then taking both Gerkin and Kench in consecutive deliveries in the 8th over, Ameila finishing up with the best figures of 4-3-38 as OBC finished just 4 runs short at 119-6.

The Division 1 guys fresh from last week’s efforts that took them in the 1-Day final next week, got off to the worse of starts in the T20 competition when they lost both of their opening matches on Saturday on Sydenham 1. In the first match they struggled to contain Heathcote who scored 143-6 with the best of the Sydenham wicket takers Sahan Perera (2-13), and with some tight overs from Connor Williams (3-1-10) and Kieran Charlton (3-2-13). The Sydenham reply saw batsmen get starts but not carry on until James Barnes (31*) and Zack Scott-Howman (50) put on 74 for the 5th wicket. However the run rate had become a stretch and Sydenham eventually fell short by 14 runs at 129-6 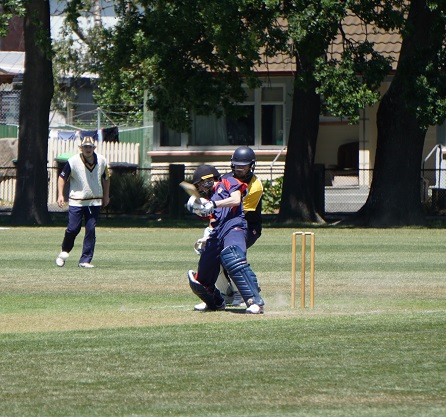 Zack Scott-Howman drive through covers off the back foot

Unfortunately they didn’t fare any better either in second match against Halswell with the Sydenham top order run rate again lacking for a T20 match. Young James Luxton with a run a ball 38 again showed promise, but outside of him only Kelvin Scott (21) and Kieran Charlton (22) reached double figures as the side was rolled for 106.

Sydenham sat just 14 runs behind BWU at the start of the second day on Sydenham 2, and then seemingly did the job when BWU batted again in their 2nd innings. James Simpson (3-46), Josh Charlton (3-28) and Ollie Smith (2-18) rolled BWU for 147 to set a target of 195 for Sydenham to win the match. 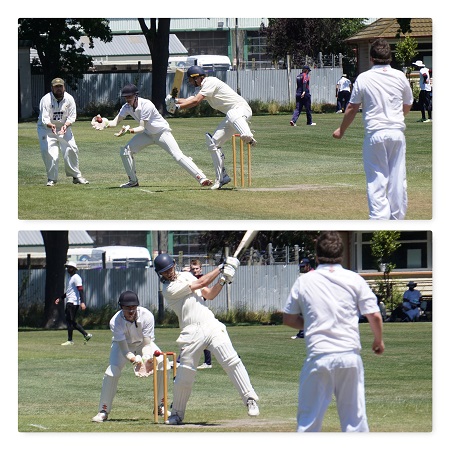 Clearly predacious spin from Jimmy Simpson, but wicket, bowled, when he bowls his straight one

However, that was as good as it got with Sydenham wickets then tumbling through the afternoon with the side soon in a desperate struggle to avoid a loss with the last pair clinging on to force the draw at 47-9.

The All Stars went down to Merivale Papanui at Nunweek Park. Winning the toss they asked MP to bat first and seemingly then did the job in bowling them out for a mere 112 thanks to Gourav Saini (3-13), and Abe Atherton (2-17). However, Sydenham started losing wickets early in reply and capitulated badly, with only one player reaching double figures, as the side was bowled out for 45. Abe’s boys now sit around 3rd in the competition but still within striking distance of the top as they go into the Christmas break.

The Tamils go into their Christmas leading their competition after another win, this time against The Buffaloes on Spreydon Domain. A solid top order batting effort from Vignesh Devel (46), Balkaran Singh (47), B Anand (33) and Mukesh Kapila (39) saw the Tamils through to a competitive 222-8. Balkaran with 4-27 together with B Anand (2-53) and Gopinath Karuppiah (2-25) then saw Sydenham bowl the Buffaloes out for 170 and a 52 run win.

Hospital took on Hornby at Denton Park, lost the toss and then watched as Hornby complied a score of 252-9. Sydenham started well with the ball having the opposition 90-6 at one point, but a 76 from the Hornby No. 8 saw them through to a testing total. Bruce Day then top scored with 71, but combined with a series 20’s from Mark Crawford (22), Minesh Fakir (28) and Senthill Dhayalan (24), wasn’t enough to get Hospital into a winning position as they finally finished their 40 over at 173-7

The Stars ended 2019 on a high, winning against a strong OBC team on a green Syd 3 pitch that kept low and slow coupled with a thick outfield made scoring difficult. We achieved the 78 runs required with an over to spare. The win was set up by a great bowling and fielding effort. Amelia Tainui and Kate Cameron combined well at the start of the innings letting through only 6 runs off the first 4 overs as OBC - who won the toss, struggled with tight bowling on the grassy pitch.

Jaimee Cartwright then took over with Sophie George combining to also bowl very tight lines to have OBC on the ropes at 29 for 1 off 9. Everybody got to bowl today and outstanding figures go to Rosie Pentecost with 1 for 4 off 2 including a Wicket Maiden, Livvy Crowe 1 for 3 off 2, Darcy Prasad 1 for 8 off 2 and Kate Cameron 1 for 7 off 3. In the field Iesha Bruce and Darcy Prasad combined in a brilliant run out from the deep, and Livvy Crowe a direct hit from the boundary, Darcy Prasad took a screamer in covers, Rosie Pentecost took a very sharp catch at short mid off and Amelia Tainui did a lot of running at Emma Begg's usual spot; short fine leg.

Having seen the difficulties the OBC batters faced in the first innings, it was imperative that our batting started well. With Maddie Iro away on football duties Iesha Bruce bravely took on the role of opener with the usually staunch Dakoda Potter, these two did what was required and put on an opening partnership of 29 off 7.2 overs with Iesha getting bowled trying to selflessly increase the run rate, scoring 13 off 27.

Then: disaster may have struck with the usually resistant Darcy Prasad getting out for 6 on the first ball after the drinks break we were at 34 for 2 after 11, compared to OBC's 36 for 2 off 11. With the game evenly balanced it was Dakoda Potter who held her nerve to ensure Rosie Pentecost could come in and take the bowlers on.

Dakoda Potter was eventually run out for 18 off 27 trying to increase the run rate. The game was then put beyond doubt with a very good partnership between Rosie Pentecost and a VERY quick Sophie George who turned a lot of singles into easy two's. Rosie ended up with 17 off 26 and Sophie 11 off 21. Well done the Stars, a great way to end 2019.