Highlight of the weekend was the Division One boys victory off the final ball of the match in their one-day final on Saturday. For the Premier Men it was a case of won one lost one at the start of their T20 campaign, and the Division two boys went one better with two victories, be it one from a default.

The ladies and youth players had no matches, and in the afternoon grades only the two presidents sides were scheduled to play with both coming up on the wrong end of their results.

The Prem men commenced their T20 campaign with the two matches on Hayley 4 after being transferred off Sydenham Park to make way for the Division 1 final. The first match against Lancaster Park was one that the side never really got into. Winning the toss and batting first, Sydenham lost its first wicket with the score at 3, and then a series of wickets thereafter to be on its knees at 22-5. It was a case of thank God for Ryan Wallace who carried on from his century last week as he attempted to stage a recovery with his excellent 54 from 45 balls. However, only Mitch Gardner (10) batting at No. 9 managed to make it to double figures as the side was bowled out for 86 with an over to go. 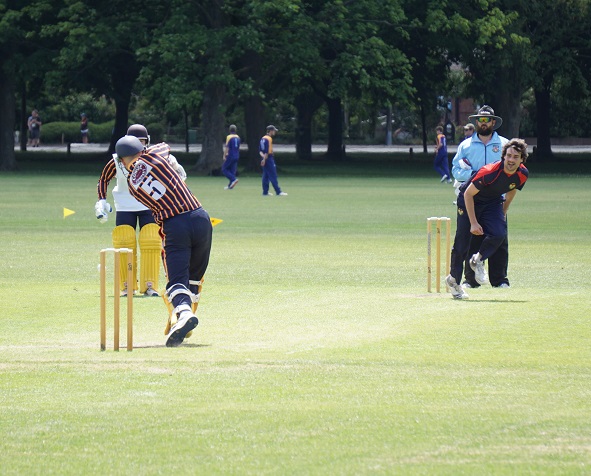 In reply Sydenham got a good start with the first wicket falling in the first over, and with some other good bowling, in particular from a guest appearance Braden Gardner [4-2-11], Tom Agnew and Mitch Gardner, a glimmer of hope was created at 60-5. However, the required total was just too small and Park eventually achieved their target comfortably with three overs and five wickets in hand. 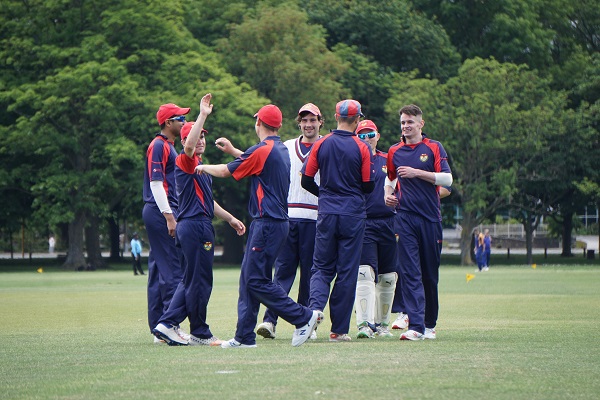 The second match in the afternoon against OBC was the more memorable one to go into the Christmas break with. Again Sydenham won the toss and batted, and although losing another early wicket Adi Edekar proved the difference with an innings of 62 off 57 balls that always had Sydenham on track for a competitive score. A 57 run 3rd wicket partnership from Adi and Lane Tutty (22) go the score through to 93-3 with 5 overs to go and then Matthew Bell [16* of 16] and Jackson Hemmingway [10 off 5] got the score through to 125-4.

Adi Edekar strikes another boundary
Sydenham again sneered its first OBC wicket in the first over and proceeded to regularly pick up wickets to keep the OBC chase mostly in check. However, the unpredictable and dangerous Daniel Stanley was striking the ball well and keeping them in the match but when he fell for 49 with the score at 80-5, and an RPO of 5.6 required, it was anyone’s match. 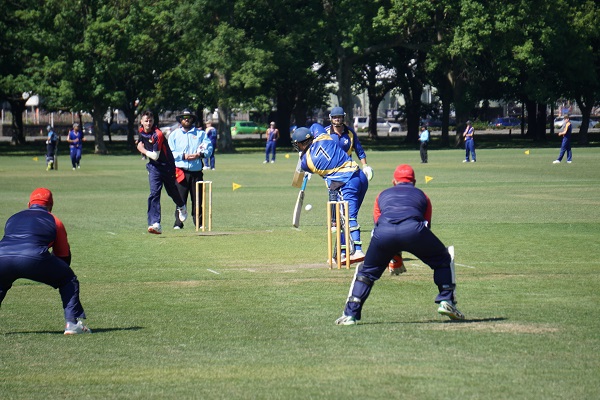 Braden Gardner on his brief return to the Sydenham ranks
But assisted by Carl Hooper’s run out of Braid, and more so Adi Edekar’s run-out of Paltridge, the match came down to OBC requiring 8 runs off the final over with two wickets in hand – but Ryan Wallace with the outstanding figures [4-0-9] was too good with OBC only getting five of those runs and thus the match ending with a three run victory to Sydenham.

The big match for the club on the weekend for the club was Div1’s One-Day Final on Sydenham 1 against Merivale Papanui . MP were worthy finalists having twice beaten the strong East Shirley side in their grade which our guys hadn’t yet managed this season – it was always going to be a hotly contested final with not much between the teams, and so it turned out to be.

Sydenham won the toss, asked MP to bat, and got immediate reward when Connor Williams picked up the two openers with the score at 11. With MP seemingly content to preserve wickets, Connor and skipper Kelvin Scott put the screws on the run rate which crawled at not much more than about two an over for much of the first 30 overs of the match, Kelvin bowling unchanged to finish with the miserly figures of 10-0-16. At that point Charlie Finnie came on and took out the middle order with 4-23 from his 10 over spell that had MP struggling at 72-7. But their No. 7 Sloane was starting to strike the ball well and got his side into a strong position at 135-7 with still 7 overs to be bowled. Connor then came back for his second spell, immediately dismissed Sloane, and then carved his way through the remaining batsman as MP were bowled out for 141 in the 46th over with Connor finishing with the outstanding figures in a final of 7-5-11. 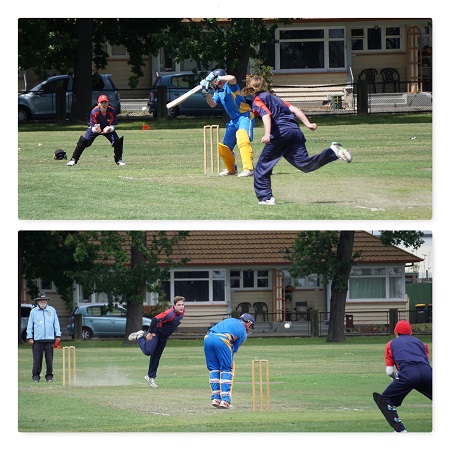 The 141 was probably a sub-par score, but Merivale Papanui got the start they wanted as Sydenham set out on its reply – Day, Scott, and McArdle were all gone inside the first 7 overs, and at 20-3, it was back to being anyone’s match. Sydenham desperately needed a partnership and that came from Pankaj Bhagat and James Barnes who set about stabilising the innings. With run rate not an issue because of the earlier good work of the bowlers, they quietly played the ball around and started to close the gap on the MP score. That vital 47 run partnership came to an end when James was bowled for 24 off 63 balls with the score at 67-4, and then unfortunately PK followed a couple of overs later for 20 off 56 balls. At that point with the score at 72-5, the balance of the match had probably tilted back into MPs favour.

The eventual match winning partnership came from the next pair Zack Scott-Howman and Sahan Perera. Emulating what PK and James had done earlier, they took a no risk approach to continue to inch towards the target. That 47 run partnership also eventually came to an end when both were inexplicably run-out with 4 overs to go, the score at 130-5, and the required run rate not much more than 3. Charlie Finnie tried to finish it early and was caught near the boundary, and then it came down to Kieran Charlton and Scott Grose to try to get us home, eight wickets down. With 2 overs to go and 6 runs required the pressure was back on, but then Kieran struck a vital boundary through square leg off the first ball of the penultimate over that relieved some of it. But it was going to be close and a hurried perusal of the Metro handbook confirmed that a tie would result in a victory to the highest qualifier, Sydenham, not that anyone wanted it to come down to that. Last over, two runs still required, then a single and match tied. With two balls to go Kieran tries to hit the winning run with a lofted drive over long-on and is bowled. Out comes Connor Williams, already vying for man of the match, to face the last ball, a single is struck through covers, the win confirmed. 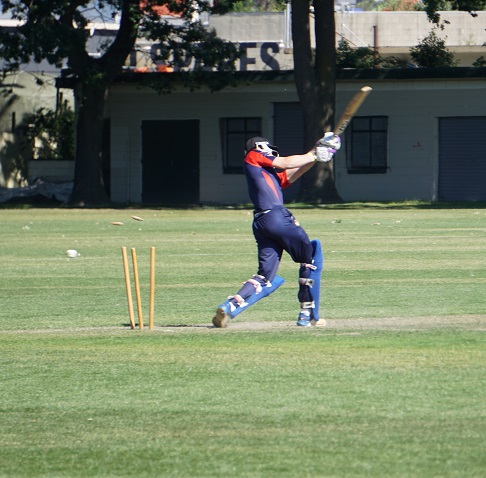 So a worthy victory for the Division 1 lads but also much credit should go to the Merivale Papanui boys for the way in which they fought hard through that second innings run chase and very nearly did enough. For Sydenham it was a great allround performance in a low scoring match where the bowlers in Williams, Finnie and Scott set up the win, and then two key partnerships between Bhagat and Barnes, and then Perera and Scott-Howman finished it off. 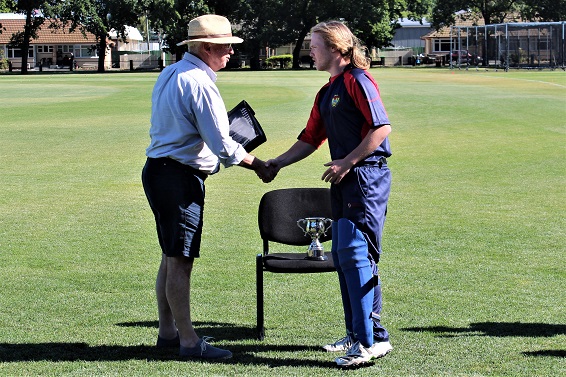 Man of the match Connor Williams 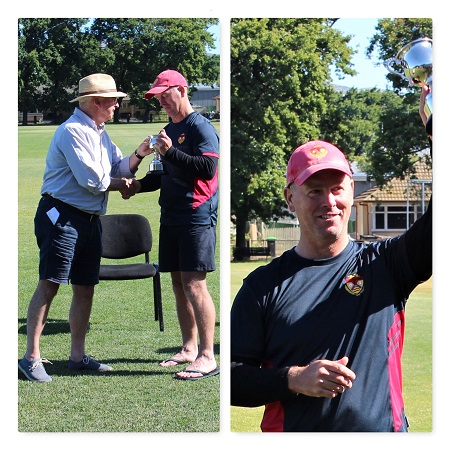 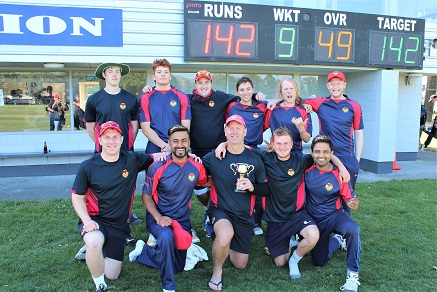 This was a match where the youth boys were again outrstanding in their holiday break opportunity to play for the senior teams. Sydenham took on Marist Harewood on Burnside Park, lost the toss and were asked to bat. Cameron Spriggs (27), Andrew Moulton (29) and Joshua Charlton (22) were the main contributors to Sydenham score of 118 as they were bowled out with a ball to go.

A modest score then suddenly looked at great one as the youngsters tore into their work with the ball. Daniel Watt (3-2-4) and Joshua Charlton (4-3-13) made the initial inroads as none of the first eight batsmen reached double figures. Ben Breitmeyer with 3-3-4 finishe the matter as Sydneham bowled Marist out for 66 to take a 52 run win.

The second scheduled match against OBC was defaulted by OBC earlier in the week.

There was another thriller on Sydenham Park across on No. 3 but one where the Pressies boys will see it as an opportunity lost when second placed Sydenham took on mid-table Hornby. Asked to bat first, although the wicket had a decidedly “well grassed” looked to it, Sydenham’s recent solid batting performances provided confidence of a reasonable score. The first wicket fell at 26, but when Anthony Wild was later dismissed later for 21 with the score at 43, a couple of further quick and key wickets had the side struggling at 44-4. Phil Walker (25) and Ken Julian (24) provided a bit of a recovery but the innings eventually closed at a disappointing 132-9 in the 40th over. 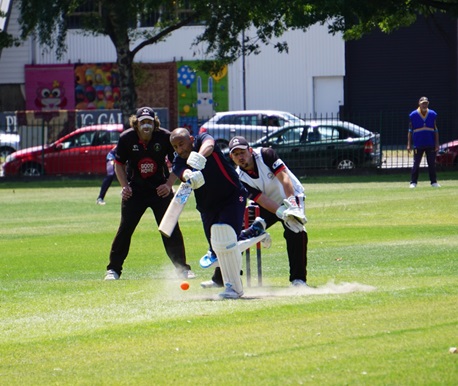 Ammar Yousef pushed through the onside

The Hornby innings followed much of the same early progress with players getting starts and getting out in the 20’s and never really looking like deciding the contest. However it was getting tight, very tight. Ken Julian had bowled his eight overs unbelievably for just 4 runs (and one wicket), no surprises there, and the others including Dave Fleming [8-3-30], Phil Walker [4-3-15] and Jules van Dyke [8-31-2] were doing the utmost to made the target difficult. But Hornby were doing just enough, and with three overs to go and the last pair in, they needed 16 to win it. As the last over started they needed seven, then just one when the first ball sailed for six.....then a series of dot balls, last ball and one required, a swing to the legside gives Hornby the win.

Hospital took on St Albans on Sydenham 2, lost the toss and were asked to bat. Richard McKinlay (40) and Bryan Bunz (31) were the mainstays of the Hospital innings, but other than Anurag Ganugapti with 17* no one else contributed as Hospital were bowled out for 108 in the 38th over. 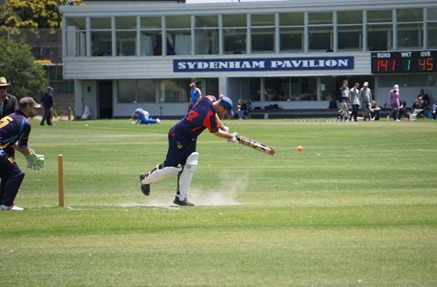 Richard McKinlay on the drive

Saints were relatively untroubled in their replay with the openers putting on 40 for the first wicket and then chasing down the total inside 23 overs for the loss of only three wickets. Abe Atherton was the best of the bowlers with 3-25.