A Win and a Loss

The adult men were mostly all back playing on Saturday after the Christmas break, with all three morning grade teams with double headers T20 matches. It was a case of a win and a loss for both the Prem and the 3rds (Div2), whilst the 2nds had an excellent day winning both of their matches and getting their T20 campaign back on track.

There were a number of outstanding performances, and although Ryan Wallace (Prems) and Anthony Wild (Pressies) both just fell short in the 90’s, there were two centuries from Balkaran Singh (Tamils) and Dan Linden (All Stars)

After losing two of their first three matches in the competition the Premier men were desperate to beat BWU on Burnside Park on Saturday. There was again no luck with toss with BWU electing to bat first and getting off to a great start. After losing their first wicket at 40 in the 5th over, the next pair of Heenhan and Hay dominated proceeding with a couple of quick half centuries and a partnership of 76 at a 8.5 run rate. Whilst that pair were going 180 plus certainly looked on the cards for BWU as the Sydenham bowlers struggled to contain them.

However, the fall of the 2nd wicket at 116, when Tom Agnew bowled Heenhan, saw the run rate start to pull back as Tim Johnston in particular again put the screws on as he had a few days earlier against Easts. The other slower bowler in Adi Edekar was doing likewise, and combined with some solid late spells by Tom Agnew and Carl Hooper, the side did well to eventually contain BWU to 158-6 in their 20 overs. 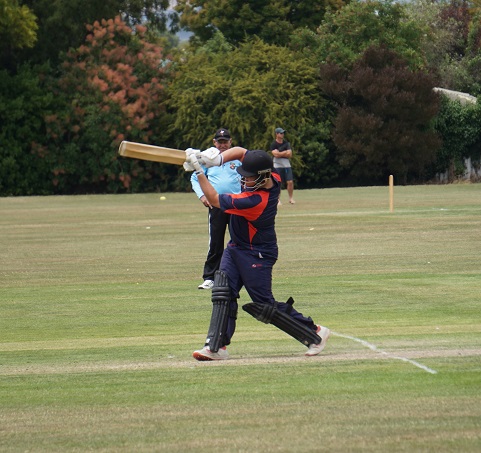 A slightly less than 8 an over run chase looked realistic in the good batting conditions at Burnside, however Sydenham got off to a rough start with Toby Mowat gone at 8, and TJ later as the 2nd wicket fell at 26 in the 4th over. Ryan Wallace came in, looked in great touch but them mishit a pull shot to be caught for a run a ball 22. Lane Tutty then fell first ball, and Adi Edekar shortly thereafter for 14, which had the innings was on its knees at 56-5. Jackson Hemingway (30 of 35 balls) in only his 5th Prem match did his utmost to turn the situation around, and together with Carl Hooper (15), closed the gap somewhat, but the task was too great and Sydenham eventually struggled through to 106-9 and a 45 run loss. 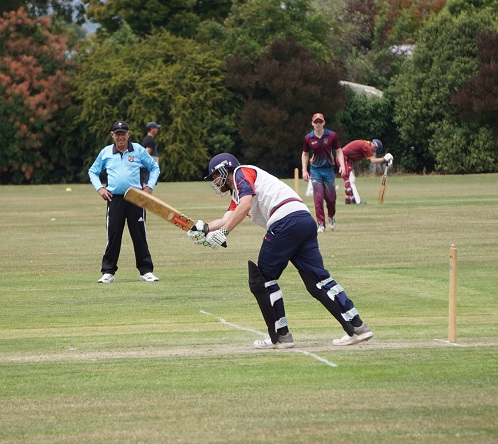 Carl Hooper tries to work one

The afternoon saw a rush around town from Burnside Park to Heathcote Domain to play the second match 90 minutes later against Heathcote. This was the first match for most Sydenham players on the smaller Heathcote ground where with its smaller boundaries, especially square, and a seemingly excellent wicket, created much doubt about what was to be a competitive score. One guide was the earlier morning’s match between Easts and Heathcote which had seen a close match with Easts just getting up to reach Heathcote’s 136-8.

TJ finally managed to win a toss and no hesitation to bat first and try at set a demanding target for Heathcote. The fact that he was able to do so came thanks to a commanding 136 run partnership between the two form players in Ryan Wallace and Adi Edekar. Toby Mowat and TJ started solidly, and when TJ fell early for 4 Toby pushed the rate along with his 22 off 15 balls before he too fell with the score at 43-2 in the 6th over.

The run rate was solid but about to accelerate as Ryan and Adi became established. Ryan was the initial aggressor who was not shy of hitting the bad balls over the top, whilst Adi was likewise stroking boundaries as the opportunities presented themselves. Unfortunately for Heathcote as the pressure came on their bowling deteriorated compounding the problem as the run rate started to accelerate up to 8, then 9 and eventually above 10. 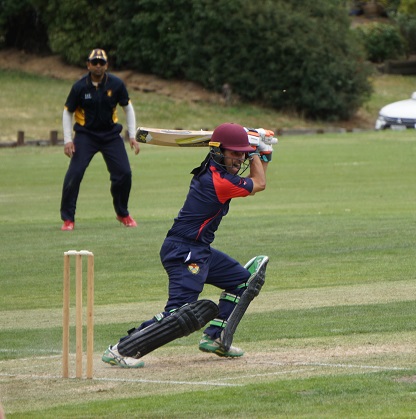 Ryan was superb and thoroughly deserved a century but was inexplicably run-out for 96 off just 48 balls with a dozen balls still to go. Adi carried on the innings to likewise finish on a no less impressive 67 off 47 balls, with Sydenham closing at 208-3.

>
Adi Edekar all elegance in his 67* against Heathcote

Any questions about the quality of that target were quickly dispelled when Heathcote got off to a poor start with Braden Gardner bowling beautifully to dismiss the number 2, 3 and 4 batsmen for ducks inside the first 3 overs to have the opposition struggling at 9-3. Despite their other opener batting through to 70*, and a couple of 20’s and 30’s further down the order, the Sydenham bowlers keep the pressure on and watched as the run rate headed into the high double figures. Best of them was undoubtedly Braden Gardner with his 4-26, and TJ with 2-26, but there were also useful contributions from most of the others mostly notably, Carl Hooper and Mitch Gardner. Heathcote eventually closed at 137-7 to lose by 71 runs. 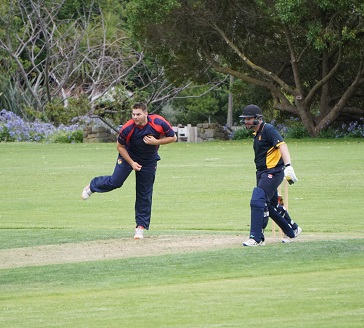 Despite the win, the earlier loss to Burnside realistically puts the semi-finals out of Sydenham’s reach with just two more T20 matches to come over the next two Thursday nights, fortunately both at home to St Albans this Thursday, and Riccarton the following one.

The Div1 boys had a great day. Although exhilarated by their win in the 1-day final just before Christmas, they were also equally conscious that their two first up loses in the T20 competition had done little for their even more important promotion prospects which cover total points across all three formats, with semi-final and final points not counting to that. They got that back on track on Saturday with two excellent away wins, one of which was against fellow promotion contender East Shirley.

The first match against Lancaster Park at Garrick went with form with Sydenham asked to bat first but then compiling a useful 140-6 thanks to the consistent Pankai Bhagat with an excellent 46 off 39 balls. He was well backed by Matt Day {28 off 25 balls] and Dave Simpson [23 off 17 balls]. Park were then bowled out for 101 with Charlie Finnie [3-21], Connor Williams [2-17] and Josh Charlton [2-6] and Kieran Charlton [1-8} the wicket takers, and skipper Kelvin Scott the most miserly with 0- 7 off his three overs.

The crunch second match against East Shirley at Burwood Park was a much less comfortable affair. Sydenham won the loss and elected to bat with Kelvin Scott getting them off to a good start with his 44 off 43 balls. However, a comfortable 73-1 in the 12th over, became 85-4, then 91-5 in the 17th over as the batting effort stumbled. However, a late rally from James Barnes [23 off 14 balls] and Charlie Finnie [13 off 10 balls] saw the side through to a better but still modest 126-6.

It required a determined bowling and fielding effort and that came initial from Connor Williams when he bowled the opener for two, and then the other was run out with the score at 7-2. The Easts middle order all came in and got starts but the Sydenham bowlers kept chipping away at them with Connor [4-3-26], Charlie Finnie [4-2-12] and Kieran Charlton [4-2-14] to the fore. With Easts 85-5 with 5 overs to go, 8 runs per overs on Burwood was probably still in Easts favour but Kieran then took a couple of key wickets, followed by one each to Connor and Dave Simpson, and Sydenham slipped home as they managed to hold Easts to 110-9.

It was a win and a loss for the 3rd team, well beaten by BWU in the morning, and then comprehensively beating Hornby in the afternoon, both matches on Sydenham 1. The BWU match saw BWU win the toss and ask Sydenham to bat first who then got off to a solid, but probably too slow, a start despite the slowness of the wicket. Into the 15th over only two down for 77, the run rate was only 5 and wickets were lost in the pursuit of a better total. Sydenham eventually close at 103-8 at the end of the 20.

Any chance Sydenham had of getting a win was then kneecapped by some loose and inaccurate bowling that saw BWU coast to the win in only 14 over and the loss of just three wickets.

The encouraging point for the second match was that lessons seem to have been learnt, especially from a bowling viewpoint. Hornby won the toss and elected to bat but then ran into a much stricter bowling performanc e from Sydenham than seen in the first match. The unacceptable 21 wides in that first match became just 3 in the second as the bowlers held tight reign over Hornby. Paddy Wickes [4-3-9] and Archie Goodrick [4-2-10] were the best of them, but Thomas Owens, Daniel Watt and Preetham Pagadala also bowled tightly and picked up a couple of wickets between them as they held Hornby to 99-9.

The Sydenham reply was emphatic – Gaurav Dudeja went early with the score at 19 but then Wayne Robertson [67* off 33 balls] and Cameron Spriggs [20 off 30 balls] batted out the rest of the innings as Sydenham reached the Hornby target at 102-1 in just the 14th over.

The All Stars took on Riccarton at Barrington Park, won the toss and elected to bat. A good score as then always in the offering as opener Dan Linden set about compiling a score of 104 off 111 balls. Other solid contributions down the order from Paul Jensen [44 off 42 balls] and Chris Reeve [23 off 49 balls] saw Sydenham through to a competitive 198-6.

Sydenham got off to a good start at their turn in the field with Mark Flowerday claiming the two Riccarton openers for a total of 6 runs but struggled to restrict from there. Despite Dan’s turn with the ball getting 2-41 off 8 overs, and Paul Jensen 2-25 off 3, not to mention Abe Atherton’s 0-10 off 7 overs, Riccarton managed to eke their way closer to the target and eventually got here nine down with just four balls to spare.

The Tamils remain top of the table after a big win over Merivale Papanui at Bishopdale Park. Winning the toss and batting first, Sydenham compiled an intimidating 253 all out thanks for 114 from Balkaran Singh and David Jayapaul’s 60. In reply the MP innings never got much momentum with wickets regularly lost with Gopinath Karuppiah [8-3-49], Lucky Bastra [5-1-19] and Jayaharish Balachandran [8-2-35] the main wicket takers. MP eventually held to 161-9 for a 92 run victory or the Tamil XI

The Cardinals were winners in a close match against the always competitive St Albans side. Skipper Phil Walker won the toss, batted, and then had Anthony Wild (92) and Matt Loose (50) to thank for the bulk of his side’s total of 216-7. The Saint reply was solid and always in with a chance as most of their top six got 30’s, and one 60. But the Sydenham bowlers were generally holding them below 5’s with Julien van Dyke [8-1-28] and Phil Walker [8-1-29] outstanding as the Cardinals eventually held Saints to 200-4 to take the win

It was a strange match at Bradford Park where Hospital took on Merivale Papanui. Sydenham won the toss, and not surprisingly on a usually dicey Bradford wicket, asked MP to bat. MP got off to a poor start but recovered week mid-innings to post a likely competitive score of 174-8. The Hospital reply was strange one with the two opener James Barkuizen ( 61) and Richard McKinlay (66*) but the required run rate moved away on Hospital such that with three overs to go it was up to 8 and a struggle. The required 12 off the last over only resulted in six and a win to MP as Sydenham finished at 169-1.