Sydenham went into this match on Thursday night against regular champion St Albans on Sydenham 1 with a only a slim chance of making the T20 semi-finals – however, we hadn’t beaten Saints for a year or two and so this match was a good test to see where the side had progressed over the season.

Sydenham won the toss and elected to bat first in the better early evening light on what was a cloudy afternoon. The batting had been buoyed by the availability of the team’s Canterbury player Chad Bowes and it was Chad that really set the tone for the innings that developed. Fellow opener Toby Mowat started well and got to a run a ball 15 before being involved in a highly unusual run-out that defied description off a free hit delivery. Ryan Wallace arrived, and for a while looked like he was back at Heathcote Domain striking boundaries at will as he did on Saturday, until St Albans targeted his one vulnerability this season, his judgement of a second run. With Ryan gone for 19 of 13 balls in the 8th over with the score at 48-2, Adi Edekar then joined Chad and together they put on another 46 to get the score through to 94-3 by the start of the 15th over with.

Adi was then bowled trying to force the pace, TJ likewise as he just failed to clear the fielder on the square leg boundary, and Jackson Hemmingway was run-out by an excellent side-on throw when attempting to take a quick single that circumstances demanded. Pankaj Bhagat then produced a little cameo 17* off 11 balls that saw the side reach 123-5, a somewhat smaller target than looked likely at one stage. Chad Bowes remained unbeaten on 40 off 49 balls in an innings where he looked in good touch as his Canterbury efforts this season testify to, but perhaps didn’t get as much strike as he and his side would have preferred. 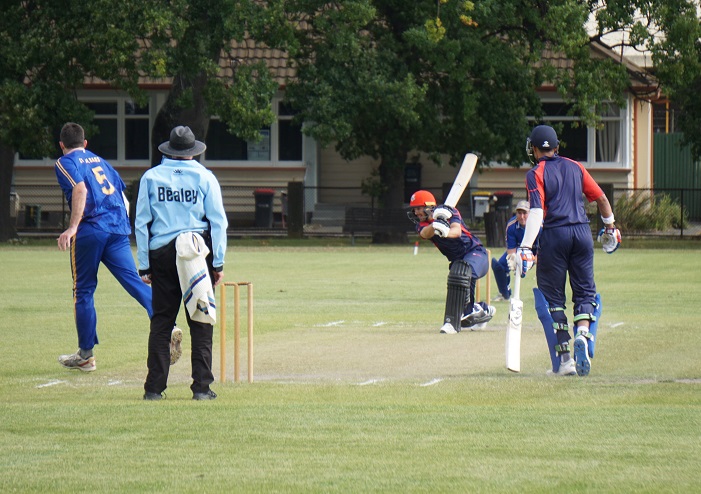 Chad Bowes take a boundary through the covers

Although a target closer to 140-150 might have been seen as more appropriate with the quality of the Saints batting line-up, that ignored the somewhat slower and lower bounce of the wicket of late, and the outfield which the council seems unwilling to cut below about 6 inches – perhaps 123 might be enough but it was going to require an excellent bowling performance to defend it against a quality side that wouldn’t have any concerns about achieving it.

Carl Hooper and Mitch Gardner set the tone with opening spells that between them dismissed the first three batsmen to even up the contest at 22-3 in the 4th over. That pressure was maintained by all of the bowlers with Ryan Wallace [3-3-11] probably the best of them, but Mitch’s 3-2-9 was equally damaging. TJ and Jackson Hemmingway applied the pressure through the middle stages and slowly squeezed the Saints batting effort that never managed to get a substantive partnership together. The loss of Tyler Lorton was a key wicket and one that left some confusion for a few minutes after Ryan Wallace caught him with a forward diving catch and then cast some doubt about whether he’d actually got there despite fielders, spectators and most importantly the umpires, clearly seeing that he had. Eventually Saints were bowled out for 94 in the 18th over for Sydenham to take a 29 run win. 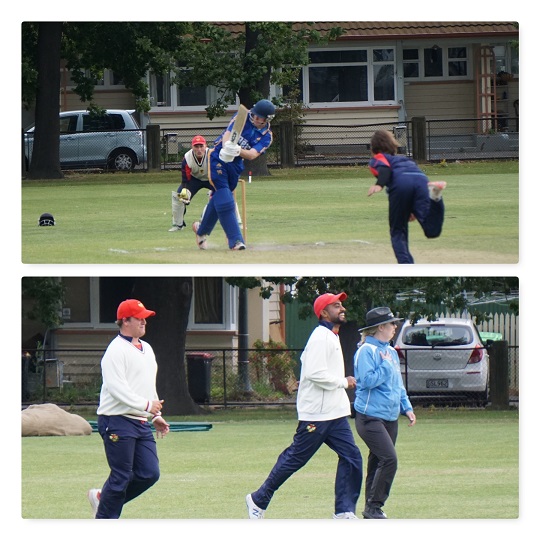 The night was an interesting one for the competition with only one of the top four sides winning their matches, and accordingly the leader board closing up tightly. Sydenham’s win keeps alive a mathematical chance to go through to the semis if they can beat Riccarton at Sydenham next Thursday, and if other results go as required. But despite how that plays out, the St Albans win was significant in that it broke a long winless streak against the champions, and provides some encouragement as the rest of the season plays out.