It was certainly lean pickings for the Club’s senior sides as the Men recommenced their 2-day competition and the Women played their first match for 2020.

The Premier Men were on the back foot for most of their match but fought their way back into it late in the day thanks to the skipper’s five wickets, likewise Div 2 were always struggling after being bowled out for less than 100. The Premier women were well beaten St Albans and the mens 2nd’s are now in a desperate struggle to try to avoid defeat in their match. Down the grades there were more wins than losses, with both Presidents side in particular getting wins.

Sydenham lost the toss in their match against Riccarton on Sydenham 1, were asked to bat, and then got off to a poor start with the two in-form batsmen in Adi Edekar and Ryan Wallace both back in the pavilion with score at 12-2. Adi had got a good one that his defensive shot failed to hold out, and Ryan had miscued pull shot in his first over. Jackson Hemmingway (13) and Pankai Bhagat (10) both got starts and batted time before both were gone with the score at 88-4. It was a bit of a procession from there as wickets fell regularly, and apart from a rearguard innings of 27 from Tom Agnew batting at 9, the middle order and tail failed to retrieve the position.

That the side managed to get through to 137 was almost solely thanks to opener Toby Mowat. Toby played an extremely responsible innings, batting through the entire morning’s session to lunch, and providing an anchor to the innings at one end. His 69 off 149 balls was perhaps his best innings of the season and deserved some better support that wasn’t forthcoming on the day. 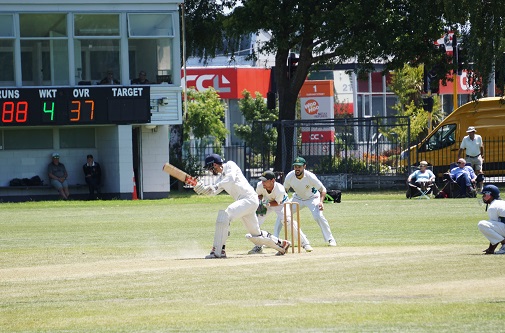 With both sides in the lower half of the table after the early stages of the 2-day competition, Riccarton would have been equally desperate for a win out of this match and to their credit they started their innings aggressively as they set about attempting to get into a dominate position in the match. When their first wicket of Bartholomeusz fell at 54 in the 11th over, their run rate was already double that of Sydenham’s at a similar stage when wickets were more the issue than run rate. But with the fall of that first wicket, Tom Agnew immediately snared the critical wicket of Riccarton’s Canterbury player McConchie at the same score and things started to look up for Sydenham. 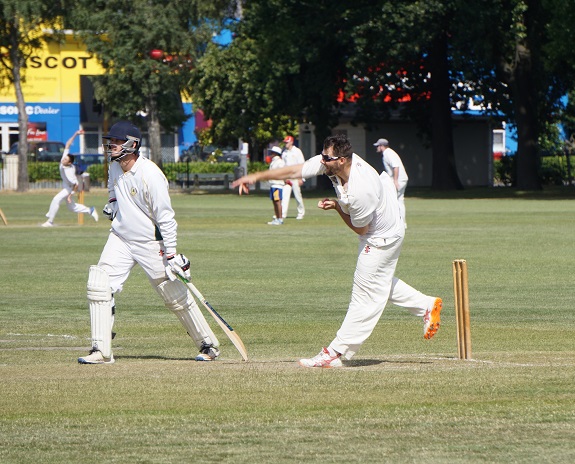 Despite the 40 run partnership for the 3rd wicket, Tim Johnston, who had taken the first wicket, started to dominate. He took out the other key wicket of Kwant and then ran through the Riccarton middle order and dramatically slowed the innings such that the match is now interesting poised at stumps at 144-5 with only 7 overs left of the 60 to bowl. As Toby had been with the bat, TJ was the dominate figure with the ball, sitting on 5-42 off 23 overs at the close, a performance certainly not aided by his side’s fielding which saw a disappointing number of dropped catches that many of the bowlers suffered from.

The match is now set up for an exciting 2nd day but one that will require a much better batting and fielding effort for Sydenham to give themselves any chance of a result.

The Women were at Elmwood Park where they took on a very strong St Albans side that contained three Canty Magicans, an Otago Spark , two CD under 19 and two overseas players. In contrast Sydenham were missing some key players through injury and as a result struggled throughout the day with Saints dominating. Batting first Saints scored an impressive 254-9 off their 50 overs to set up their win. Sydenham main wicket takers were Isla McKenzie [5-3-31], Rachel Davidson [6-2-31] and the Northern Districts captain Felicity Leydon-Davis, who impressed in her first outing for Sydenham, claiming 2-26 off 10 overs.

The Sydenham reply faltered early with Felicity’s 11 the only double figure score out of the top five batsman. The first wicket fell at one and then others consistently from there such that by the 10th over Sydenham were well and truly out of the match at 29-5, and eventually bowled out for 116.

The ladies revert to the start of the T20 competition next week with two matches against Saints and then OBC. However, with some luck on the injury front, and the arrival of Felicity and Erika Oda, the latter who has just returned from Japan, there is reason to go into the series with some confidence.

The 2nds have a real fight on their hands to save their match after the first day when they took on East Shirley on Sydenham 2. The toss was always going to be important in good batting conditions but unfortunately Easts won it and then set about putting themselves in a commanding position in the match by scoring a massive 374-7 off 60 overs. The two key East batsmen both delivered - Entwistle who seems to relish Syd2, scored his second century there this season, this time a massive 188, and along with Duncan (76) made life difficult for the Sydenham bowlers. The best of them were probably Connor Williams [8-3-63] and Dave Simpson [18-2-98] but it was a day for the bowlers to forget. 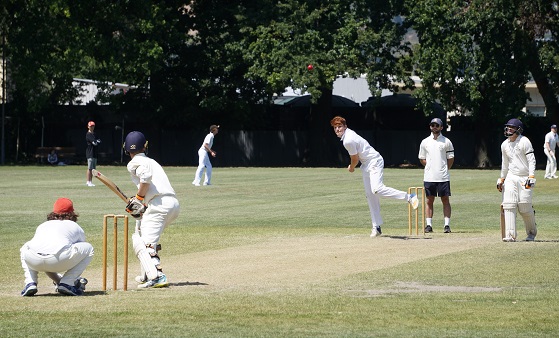 Sydenham needed to bat well, but lost openers, skipper Kelvin Scott, and then Sahan Perera, inside the first 7 overs to be teetering at 16-2. A considered 68 run partnership for the 3rd wicket between Tom MacDonald (38) and Taylor Irie got the score through to 84-4 before Tom was disappointingly run-out. Taylor batted on responsibly in one of his rare innings this season due to injury before he too was out for 44 off 107 balls. Matt Day (19*) and James Barnes (3*) weathered the remaining overs of the day to finished on 117-4 with 20 overs left in the first innings. 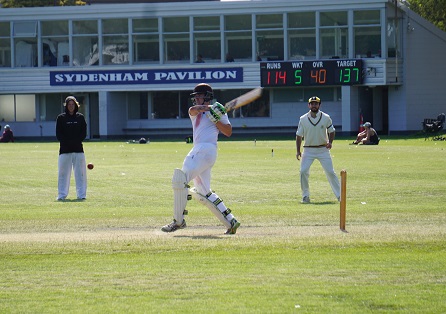 Taylor Irie during his comeback knock of 44

Next week will be a test of character for the side with saving the match now the sole objective which will require batting out the remaining overs, and then bunkering down to attempt to bat out the rest of the day in their second innings.

The Div 2 guys failed to make good first use of the Sydenham 3 wicket when they took on OBC on Saturday. After losing their first two wickets with the score at 9, the side never recovered to be all out for 75 in the 32nd over. The indomitable Paddy Wickets topped scored with 15 off nine balls, including two sixes, but the rest of the batting order struggled to create partnerships. 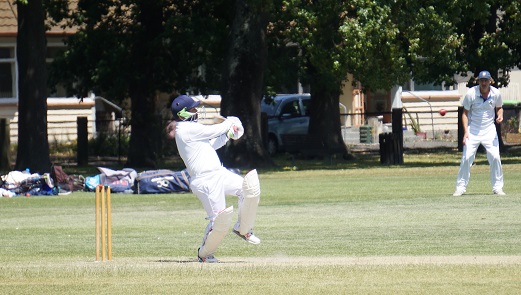 Sydenham started well with the ball with Daniel Watts and Thomas Owens getting both openers with the total at 5, but two mid-order 40’s from OBC saw them through to 142-6 at the close of the first day. Best of the bowlers were the two youth players in Daniel [12-2-27] and Thomas [8-2-32] but Paddy and James Simpson also did well to contain the batsmen going at close to 2’s. 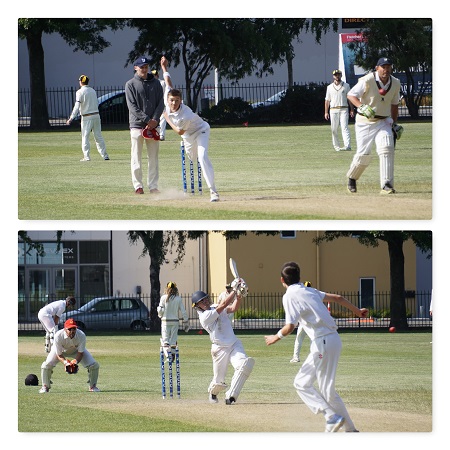 Check the scorecard, it’s not an error, the All Stars won their match in 16 balls. Sydenham played Heathcote on Centennial Park, and Heathcote would no doubt have rued their decision to bat first when they were dismissed 13 overs later for just 19. All four Sydenham bowlers did the damage; Abe Atherton [5-3-2], Mark Flowerday [5-2-6], Gouray Saini [1-2-4] and Dan Linden [2-2-1].

In reply Ben Potter [14 off 9 balls] and Rhys Williams [6 off 7] finished the win off in that 16 balls with plenty of time for early afternoon refreshments.

The Tamils had a rare loss when they played Riccarton at Barrington Park. Asked to bat first Sydenham could only muster 114 all out with the top scorers being Vignesh Devel (26), Mukesh Kapila (17) and Gopinath Karuppiah (18). Riccarton then proceeded to quietly chase down the target for the loss of five wickets with Balkaran Singh the best of the bowlers [8-3-17]

The 2nd placed Cardinals had good win over league leaders BWU in their match on Burnside 3. Batting first Sydneham scored 128-7 thanks to Kieran Williams (45 retired) and Cameron Rennell (39). In reply BWU were bowled out for 125 but it was a close thing with BWU’s last pair needing 4 to win off the last over before Adrian Patchett got the vital last wicket to give the Cardinals a three run victory. Full details are not available but we understand that Josh Gardiner was the best of the bowlers with three wickets.

The Cardinals kept their championship ambitions on track with a good win at Centennial Park over a strong East Shirley Black side. A patient 69* from opener Dave Hardy who batted through the innings was the backbone of the Sydenham innings of 169-5. Other key contributors were captain Phil Walker (39), Jeremy Brown (27*) and Tim Hannan (18). Easts got off to a poor start but were never totally out of the match despite the regular loss of wickets. Tim Hannan [8-3-21] and Warren Guy [8-2-26] did the early damage, but when the pressure came on latter in the innings, it was Anthony Wild’s dismissal of Harkness, and his 3-42 that cemented the victory – 33 had been required off the last 3 overs, and then 16 off the last, before Julien van Dyke ran out the last batsmen to confirm the win.

Hospital completed the double for our Presidents sides when they beat Lancaster Park at Garrick Park. Sydenham won the toss and elected to bowl first. They then kept the Park innings in check with some miserly bowling from the likes of Minesh Fakir [8-1-13], James Barkhuizen [8-1-20] and Bryan Bunz [6-2-16] and Pieter Barkhuizen [8-1-24]. Park batted through to 134-6 in their 40 overs.

The Sydenham reply was an equally well shared task with the first four batsmen all contributing with Richard McKinay batting through for 47*, but there were also good scores from James Barkhuizen (25), Prassana Karunasekera (30) and Minesh Fakir (23). Hospital batted through to reach the Park score at 134-3 in the 34rd over to take out the match.