Aggers Sixfer Still Leaves Plenty of Work To Do

Tom Agnew’s career best 6-61 were not enough to give the advantage to the Premier Men on the first day in their match at Burnside Park.

The Premier Women were comfortable in taking out their 1-day match thanks to another six wickets to Gina Alderley, the result giving them their second consecutive victory and the Championship side are evenly placed in their match. Div 1 had a big win over at Edgar MacIntosh Park, and Div 2 ekked out a great win in a close one against Riccarton.

The results down the grades were mixed with wins to Abe’s Div 6 All Stars, the Div1 women, and Presidents Cardinals. In the Youth grades the boys had one win and two losses to start the season.

Buoyed by their first up win the previous week, the Prems took on BWU on Burnside Park in what is always a challenging match. The skipper won the toss and for the second week elected to bat on what is usually always a well prepared wicket at Burnside. The two Sydenham openers got the side of to a solid start batting through the first 10 over before Nathanael Paltridge fell for 15 with the score at 19. Matt McCall looked comfortable in his first match for Prems following his return to Christchurch and it was a surprise to see him bowled for 18 which took the score to 42-2. Adi Edekar’s innings then was undone by some uncharacteristic uncertainty outside off stump that saw him caught behind for 2 and Sydenham then 58-3.

Ryan Wallace continued on with his recent good form, being especially strong on anything short, but when he was also out to the ultra consistent BWU spinner Sam Carlaw for 37, the Sydenham innings had reached a crossroads at 90-4 and a run rate barely above 2.5. Toby Mowat (51) and Matt Bell (25) then righted the ship to get their side through to 152 before Matt’s dismissal in the 52nd over. 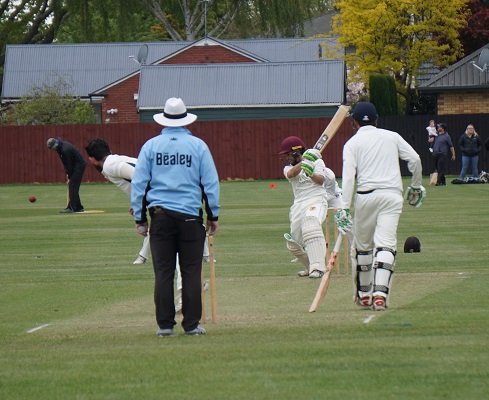 Ryan Wallace punsihes through the off side

That’s about as good as it got as the innings then unravelled with Carlaw in particular routing the lower middle order and tail as the overs ran down. The last 5 wickets fell for just 27 runs as the side was bowled out for 179. It was an innings that showed promise at times, but the run rate was a struggle with Sydenham never getting on top of the BWU bowlers to get to the 220-230 score that the conditions probably warranted.

The Sydenham bowling effort got off to a great start when Tom Agnew bowled opener Zohrab with the score at 2 but the momentum of the innings from there was very much driven by the BWU batsmen. With the batsmen prepared to take risks the Sydenham bowlers struggled to contain the run rate, especially Matt Hay who scored an excellent 80 off 44 balls 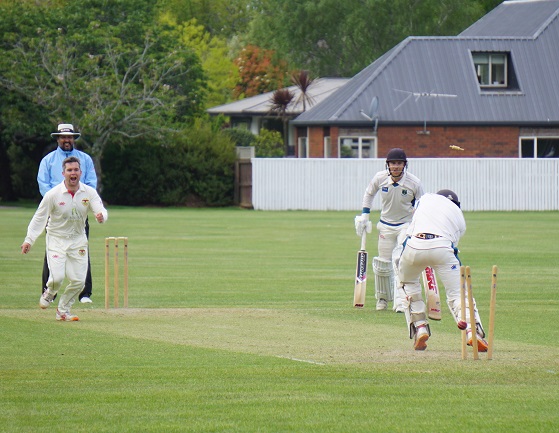 Fortunately Tom Agnew was in the process of returning his Prem career best figures of 6-66 which kept his side chipping away at the wickets without ever getting on top of the BWU innings. Ryan Wallace was the only other wicket taker when he had opener Huyser well caught by Adi at cover, but it was a tough day for the bowlers with most going at 6’s as BWU finished the day in the more advanatged positon of 231-7. 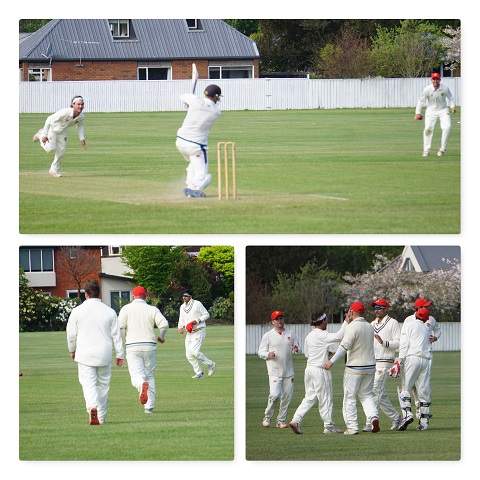 So a good day for BWU leaving plenty of work for Sydenham to do next week, starting with some early wickets to try to restrict the BWU lead and have a chance of setting them a competitive 2nd innings target

The Premier Woman, looking resplendent in a new strip, took on OBC on Sydenham 2. After losing the toss and being asked to bat first, they were quickly in trouble at 14-3 as one of the OBC opening bowlers dominated. However, the experienced Felicity Leydon-Davis with 38 righted the innings, and when she fell with the score at 115-6, the opportunity was still there to post a competitive score. Jenna Waghorn (23), Jordan Meltzer (18) and Amelia Tainui (10) all continued to progress the innings until the side was finally bowled out in the 38th over for 150. 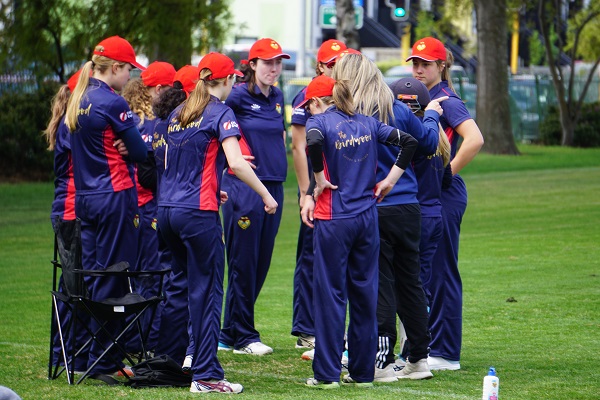 The target must have then looked daunting for OBC as Gina Aldersley then kneecapped the innings in the first 5 overs when she took the first four wickets to have OBC struggling at 14-4. 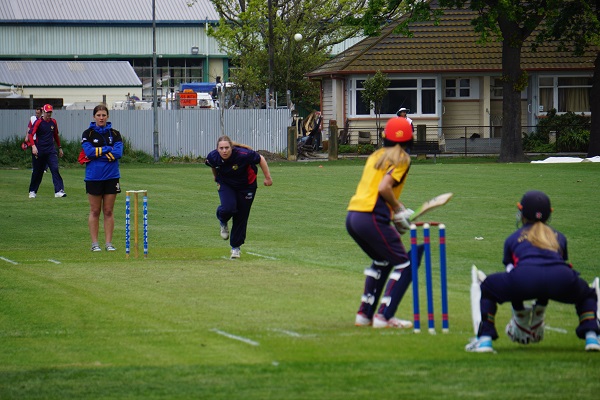 Gina Aldersley during her spell of 6-17

The batting side managed to recover to 84-4 but then capitulated as Gina completed an inspired spell to finish with 6-17 off eight overs as the OBC innings closed at 122 in the 39th over. The other wicket takers were Boadicea Lynch with 2-19, and Isla McKenzie 1-14.

It was an initially frustrating day for the Championship side when they played Riccarton on Sydenham 1. Winning the toss, Sydenham asked the Riccs to bat first and then struggled to make an early break through despite a lot of playing and missing. The Riccarton batsmen worked their way through to 70 before the fall of the first wicket. Although the 2nd fell soon thereafter at 75, Riccarton kept the initiative and were assisted by an injury to Connor Williams who was restricted to three overs in the morning session.

At 123-2 Riccarton were looking set for a big score but Connor’s return to the crease after lunch changed the momentum of the innings as he proceed to pick up his second consecutive 5 wicket bag with 5-51. With Quentin McIntyre’s (2-47) and Charlie Finnie (an economic 2-58 off an impressive 24 overs) also bowling well, Riccarton were eventually bowled out for 194 as their middle order and tail folded cheaply.

The Sydenham innings started poorly when Lane Tutty was apparently “caught” at gully off the first ball of the innings, but recovered from there as all the remaining batsmen scored 20’s or 30’s. Pankaj Bhagat was the best of them as he kept up his strong early season form with 34, but other useful innings came from Kelvin Scott (28), Taylor Irie (25) and James Barnes (29). At the close of play Sydenham were reasonably well placed 131-5 with next week’s return of two key batsmen assisting the rest of the innings.

Sydenham completed a fine 1-day win in their match against Merivale Papanui on Edgar MacIntosh Park. Batting first Sydenham scored an challenging 257 all out thanks to stand-in skipper Gaurav Dudeja’s 78, ably backed by 57* in the middle order from Vishvash Singh, and a 38 from AB Bandaru.

James Barkuizen then took a fine 6-20 to reduce Merivale Pap to 5-15 in reply at one point before they were finally bowled out for 86. All of the bowlers contributed, notably Archie Goodrick who deserved far better than the 1-18 he took off his 7 overs.

Div2 started their season on a high note defeating Riccarton on Riccarton Domain in a match that fortunes fluctuated wildly and required more than one comeback for the boys to get across the line. Riccarton won the toss and got the early success when they ask Sydenham to bat and took the first two wickets in the space of 9 runs. However, Jono Bennett then played the innings of the match with a fine 85 that got the side through to 153-6 on his dismissal. Importantly, the middle order and tail then added to the momentum with skipper Andrew Moulton (31), David Brostow (20), and a useful effort from Paddy Wickes (12*) and Daniel Unwin (15), getting the side through to a solid 218 all out.

In reply Riccarton got off to a good start with 40 for the first wicket and getting through to strong position at 133-2 before Sydenham fought it way back into the match. The early wickets to Paddy Wickes (2-29) and James Simpson (2-30) got the innings into a balanced position at 168-5, but then Jono run out the Riccarton No. 3 for 53, and the skipper stepped up with the ball. Moults took 3-51 to get the score 195-9, and after Tony Danenberg then got a key run-out, Moults took the last wicket with the score at 202 to dismiss Riccarton 16 runs short.

The Goats lost to Marist Harewood on Centennial Park after Marist scored 267-8 batting first – Chris Douglas 2-36, Andrew Douglas 2-30 & Ollie Philpott 2-57. In reply Sydenham were well short, all out for 111 with Jacob Harrington top scoring with 24

The All Stars were another who started the season with a big win when they comprehensively beat Southern Districts on Beckenham Park. After winning the toss and asking the opposition to bat first, Jordan McCormick ripped through the batting line-up taking 6-10 off 5 overs and routing Southern Districts for 72. The other wicket takers were Dan Linden (2-9) and a wicket each from Abe Atherton and Mark Flowerday.

Sydenham made short work of the reply with runs coming from Jacob Koster (22), George Kenny (14) and Paul Jensen (26) who coasted the side home at 76-3 inside 12 overs.

The Tamils received an abrupt welcome to Div 6 when they were soundly beaten in their first match since promotion against OBC at Bradford Park. Asked to bat first on an often notoriously difficult pitch, Sydenham struggled from the outset with only two batsman just reaching double figures as the side was bowled out for 45 in 21 overs. OBC then smashed their way to the victory inside 5 overs for the loss of only 2 wickets

The Pressies got their season off to a good start when they took on Lancaster Park on St Albans Park. Sydenham won the toss and then struggled on a difficult wicket where only three batsman managed to make double figutes. Opener Paul Mathews scored a 30, and Warren Guy and equally valuable 16 down at no. 8, but it was largely left to Phil Walker with an excellent 69* in challenging conditions to get the score through to a respectable 155-8.

That score proved too difficult for Park as they lost early wickets, and only a 33 from their no. 9 got them through to a modest 90 all out. The best of the bowlers was Brenden “Ralphy” Winder (3-17) making a welcome return to the team after a spell in Queenstown, with other contributions from Julien van Dyke (2-23), Dave Fleming (2-15) and Jeremy Brown (2-21)

Full details of the Hospital match are not available but Hospital went down to Sumner on Sydenham 3. After winning the toss and asking Sumner to bat, the skipper came to rue that decision as Sumner proceeded to hit 14 sixes in their innings of 293-6. It was tough going for the bowlers with drop catches not assisting the cause especially for Rahul Mukherjee who probably suffered the most.

Hospital fought well in reply and can take some comfort from the fact that their two best performers with the bat were their two new players in Tim Suddaby (69) and Nathan Crowe (48). Mark Crawford also scored a fine 38 as Hospital finally succumbed for 201 all out. 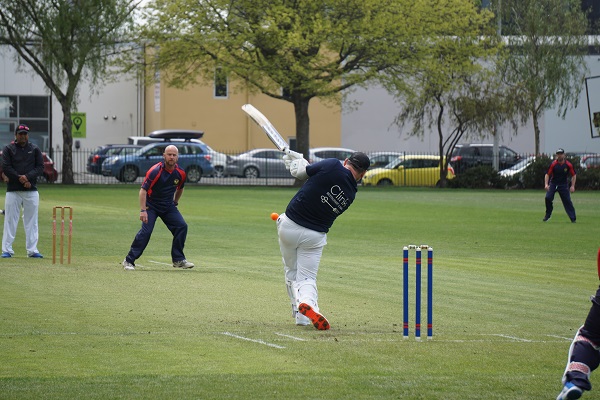 The Div 1 women mostly had Darcy Rose Prasad’s 62 off 70 balls to thank for a solid batting effort that saw them set Lancaster Park a target of 178 in their match at Woolston Park. Darcy was ably assisted by Umaya Ranaweera (31), playing her first match for Sydenham, and Madeline Iro with 25.

The youth woman had a bye and will play next week

At Cashmere High, the Christs Second XI won the toss and batted first against the First XI. They accumulated 144/7 and were then dismissed for 144. Bowling highlights were Zach Howe taking 10-1-23-5 and Daniel Watt going for not many 8-3-8-0. Into bat, the First XI lost regular wickets to be 31 short. Rhys Thyne was the top scorer with 41. 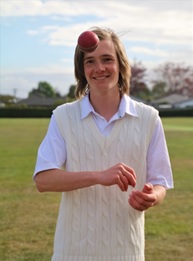 Over on 6A, the Year 10s also took on St Andrews posting a 202 all out in the 36th over. 52 for Matthew Fairhall and 42 for Logan Yates. STAC chased down the runs for the loss of 2 wickets.

The 9Bs took on St Bedes at Warren Park. A couple of players short didn’t help and they scored 59 all out going down by 10 wickets.