Now let face it, we all know that there is one glaring deficiency in Ralphy's game, but heck, the rest of his cricketing skills that don't involve a coin sure win us some matches. 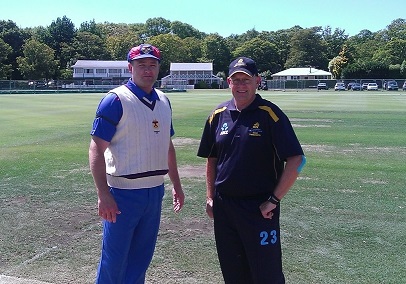 For lower grade club cricketers, short of finals cricket, these are the days that you play the game for. A match on Hagley Oval, an outfield that resembled a carpet, a CCA photographed coin toss beforehand (well for us, kinda perverse), a 30 degree day, and playing the league leaders, it just doesn't come better than that. So there was a sense of occasion as we turned up at Hagley, and you could tell that Saints felt the same. For them it was a match to maintain their good momentum towards the title this year, and for us, realistically it was one where we needed a victory to close the gap on second and third places. This was the game where we needed everyone to step up, and they did - it was a game, whether bowling and batting, everyone contributed to victory.

Saints elected to bat, a perfectly sensible thing to do in that heat and on a deck that looked like, and indeed played like, a road. But then again, as Hornby did the previous week, that decision permitted us to roll out a formidable bowling line up who then set about dictating the tone of the rest of the match. Between them Sam, Jase and Jules strangled Saints from the outset, especially the latter two. In fairness to the batting, this was a new experience for most in these conditions and it would have taken a batsman a little while to adjust, but after Jase took out both openers in his first three overs, at three down after 10 overs with less than 30 on the board,  everyone knew that Saints were considerably under-performing in the conditions.

All bowled well, Sam and Flem got a couple each, Ralphy and Matt one each, but when the bowlers strode purposefully from the wicket at the end of the Saints innings at 160/9, it was Jase (2/16 off 5)  and Jules (1/15 off 8) that had been the inspiration for the performance. The fielding was a bit reminiscent of the previous week without perhaps the majesty of Wildy's catch against Hornby. A good 4-5 catches went down, but some that would have been excellent catches at any level, but probably in the conditions the fielding was the one area that was our lesser light on the day.

The batting performance in response was very similar to the bowling one, a dominance set early by the opening two, and we never looked back from there. With the two regular openers in Laughts and Wildy out on the week, some improvisation was required. Those roles was taken up by Matt and Ralphy and the way they went about the job was a lesson to all openers. Ralphy clearly had set himself to bat through the innings, and that he mostly did, and although both quietly played themselves in, Matt (27) was the one who later quietly accelerated the scoring as Ralphy worked the ones and twos with the occasional boundary.  Other than Yogi's duck, everyone contributed to the performance with at least a 20, and chasing only 160, that's all you needed. But it did require one good level headed performance and that came from Ralphy (60) - well controlled from the outset, and once he had put us into a position where we could risk a small acceleration in the scoring rate to further improve our position, he took 19 off one memorable Mather over to extinguish most of St Albans remaining aspirations in the match.

Sam's 26 at No. 4 aided the cause greatly, but when both Ralphy and Sam were both gone, there was much comfort is seeing two old heads in Geoff (26) and Ken (20) ensuring that momentum was not lost as they took us within reach of Saints total.  But it was about this time, with 11 runs required and five wickets in hand, that we suddenly realised that this was the exact same situation that Hornby had advised us the previous week that they had found themselves in with their game against Saints earlier in the season - they had then promptly lost all 5 wickets to lose by that 11 runs. Surely it couldn't happen again but what it did mean was that Saints knew it could, and they stepped up the energy accordingly. But no, it wasn't to be, Hornby didn't have the luxury of a Kev Moore coming in at no.7.  A couple of two's from him, then tied at the end of the 39th over, that winning run coming with four balls left as Jase, playing his last game of the season, cleverly crafted a bye.  Although the close finish was more designed for spectator excitement (15 Filipinos on the building site), frankly, we never looked back from those first few overs in the field, and stayed in a dominate position throughout the match.

So a very encouraging performance from all the boys, a bit of a momentum loss for the Saints guys but for them probably just a hiccup in their season as their beers will no doubt be the ones that taste the sweetest at season's end.

Gold probably next week - out of the fire into the frying pan.

Man of the Match:  Jason Miller (with highly acclaims going to Jules and Ralphy)