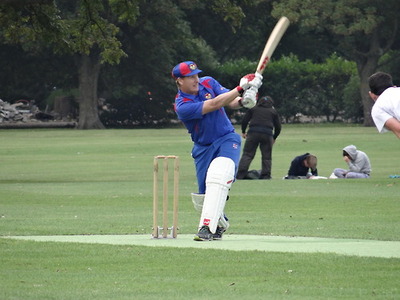 Today at Burwood Park, Anthony Wild (left) and Brendon Laughton (right) put on 305 for the first wicket for the Sydenham Cardinals against East Shirley Blue Presidents.

In all the cricket that I've been involved in, this is the first time that I've seen a partnership for any wicket in excess of 300. To make it even more impressive, this partnership was over in the 33rd over of our 40 over game!

This partnership was their 3rd 150+ opening stand since Christmas, but this was by far their best to date. During their innings, Wild 193 and Laughton 110, both passed over 500 runs for the season. This was Wildy's second consecutive century and Laughts first for the club. The competition between these two players have resulted in tremendous batting by both players over recent weeks.

It was a great partnership between these two, with 19 6's and 26 4's between them, they completely dominated all 8 bowlers who tried to slow their progress down.

Their partnership set up the Cardinals for a big 207 run win and keep them firmly in 2nd place in the grade. 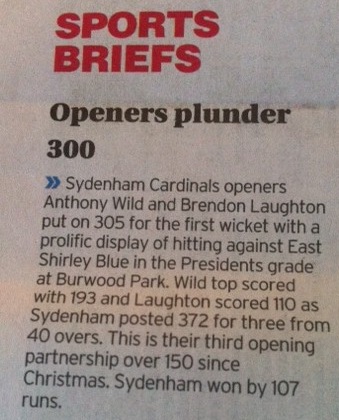