I'm Philling in for our normal excellent report writer, and am pleased to be able to report on an excellent 5 wicket victory! Which was even more comprehensive than it sounds, as we got within 10 runs of victory with 8 wickets left......

After Ralphy had proved again that he isn't a big tosser, when BWU decided to bat on their home deck 3 things stood out;

And we backed up with our best bowling display of the season, plus took 9 catches! Although the first over didn't go so well, with 2 misfields off Ralphy that both went for runs and a sharp dropped catch behind the wicket. And when the reprieved batsman slogged Ralphy for 6 in his next over, things looked a bit ominous. But 2 balls later the batsman snicked a rapid Ralphy riser that Spencey did well this time to hang on to. And what a guy that Wazza Guy is backed Ralphy up excellently at the other end. As BWU were 24/1 after 5 overs, but in the next 15 overs scored just 28 runs for the loss of 4 wickets to limp to drinks at 52/5, with into the wind Wazza having much to do with this. As firstly he induced an edge that Flem took at 1st slip (Flem being the only volunteer for this position before the game!), while soon after he found another edge - however unfortunately Flem couldn't hang on this time. Then the dangerous Crash Robertson hit a powerful off drive off Wazza, but straight to Wildy at deepish mid off, who held on well at head high.

Kev Moore had followed Ralphy at the bowling crease and was very economical right from the start, and he induced a mishit hook that Wazza turned into an excellent running catch from square leg. And the pressure told on Roy, who charged Kev, but only succeeded in skying one to the safe hands of Ralphy at cover. At tea Kev had the brilliant figures of 5 overs 2 for 4, but when he went for 8 off the first over after the interval Flem came on for him. The experienced Graeme Turner and Kember tried to mount a recovery for them and did succeed in putting on 31 runs, although Kember was very lucky to survive a very plumb looking LBW appeal from Congo when he swung across the line. Congo bowled beautifully into the wind and did succeed in breaking the stand when Turner, having just swung a 4 over mid wicket, tried to repeat the shot but only managed to hit a swirling skier - and Ralphy took an excellently judged catch running round at short mid wicket.

After that there were only pockets of resistance as firstly Flem got rid of Kember (via another good catch by Wazza, this one at backward point as Kember sliced a cut) then got an LBW with a very good delivery 2 balls later. Ralphy rightfully returned and was predictably too quick for a tail ender's attempted hook that just ballooned up into the air, then Wildy finished things off - 3rd ball he'd induced an edge that Spencey couldn't hold onto, but next over Spencey made no mistake when Wildy got another edge. So BWU were all out for just 107 in 35.4 overs, including only 10 boundaries, as all our bowlers performed as excellently as the figures show; Ralphy 6 2 19 2 (and 2 catches) Wazza 8 2 24 2 (and 2 catches) Kev Moore 6 3 12 2 Congo 8 2 16 1 Flem 6 0 21 2 (and 1 catch) Wildy 1.4 0 5 1 (and 2 catches). Wazza was just about the pick of the bowlers, beating the bat a number of times and it was great to see him get some decent reward for all his hard work this season, plus back it up so well with his fielding. But everyone bowled extremely well, including Congo showing yet again his excellent control, and Ralphy following up last week's stand out spell with another pacey and penetrating display.

When we started our innings Laughts was quickly into his work again, following on from his superb 97 last week. But he quickly lost Spencey for 3, out to a sharp juggled catch by Turner at slip, and when Kev Moore played all over danger man Kember's 3rd ball to be bowled for 1, leaving us 26/2, the game was somewhat in the balance. At this stage JK entered at no 4, promoted in a typical Ralphy masterstroke (as JK hadn't bowled), and he and Laughts set off in a match winning partnership. Laughts gave one hard chance at mid off early on but never faltered after that, playing some of his trademark bludgeoningly powerful drives and also plenty of well placed singles, while JK frustrated the bowlers, showing a sound defence when necessary and also some good and wristy scoring strokes. We took drinks at 72/2, which BWU weren't interested in and this break added to the frustrations they were already starting to express. 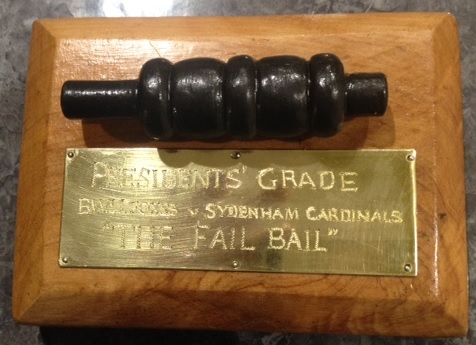 As we came back on Crash had words with Laughts including "that it was all about him", but Laughts responded with "well as long as you realise that then everything's all right!" to typically have the last word! Laughts and JK kept the runs coming after drinks and Laughts eventually brought up his 50 with a huge 6 downwind, miles over the long on boundary. But with the score on 98 and just 10 needed for victory, Laughts skied one into the wind and was safely held by Kember at long off for 51. This ended an excellent partnership of 73 with JK who fell next ball, nicking a good ball to the keeper for 30 invaluable runs. At the other end Wildy beautifully timed his first ball over mid wicket for 4 but top edged his 2nd for a gentle catch, making us 102/5, then Flem hit a couple of nice 2's through the covers, setting the scene for Ralphy. And he didn't disappoint, for the 2nd week in a row smashing the winning runs over midwicket, although this one didn't quite carry over the boundary. So for the 2nd week in a row we played some excellent cricket, to beat a top team.

Man of the match; The inimitable Jules humorously suggested that both he and your humble author should both be in contention for this, as neither of us had put a foot wrong - we hadn't been dismissed or had any runs scored off us, dropped any catches, done any miss fields or given anyone out LBW when umpiring! :-) But on close reflection we were edged by another match winning innings by Laughts, scoring nearly half our runs. While Wazza, JK and Ralphy all score very warm commendations, Congo and Kev Moore big congrats for their top class bowling and Flem and Wildy also warm well dones for their valuable contributions, plus one to Spencey for hanging on to a flying edge early on. So Burnside were burned off, the victory ales were very satisfying and bring on Hospital next week!

Man of the Match: Brendon Laughton

ED: This match saw the Cardinals return the Fail Bail back to its rightful owner, BWU Foxes!