With Lancaster Park Woolston rapidly moving out of the equation over the course of the day as bonus points were accumulated in the Sydenham-BWU match, the job for the Sydenham Premiers became increasingly clear, avoid defeat and the 2-day championship was ours.

And starting the second day with a 134 run lead, we probably were in alot more of a comfortable position to do that than the way it felt at times in the morning, a reflection on the fact that BWU in second place had no intention of making it easy for us. 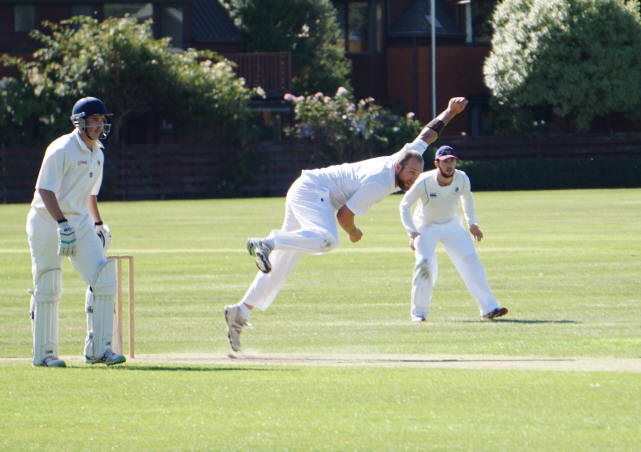 The initial euphoria of dismissing the two BWU openers for 21 was quickly replaced by alot of hard graft as Sam Noster's 90 off 103 balls, followed by useful contributions from Parker and Winn scored at a good clip, suddenly raised the prospect that BWU might be able to score enough quick runs to set us a target with enough time left to give themselves a chance to take the title themselves. However when Harshal finally got Noster, wickets started to fall on a regular basis and the run rate turned down such that towards the end of the innings BWU seem caught between not knowing whether to try to push on for the declaration, or use up time to avoid a defeat. In the end they were all out for 250 leaving Sydenham to chase 115 with time not an issue.

With our leading wicket taker Chris Harris away on the second day on T20 World Cup duties in India, the wickets were shared around with stand-in captain Tom Agnew leading with three in a solid display by the bowlers which was not always as well supported in the field with at least four catches going down to everyone's obvious frustration. 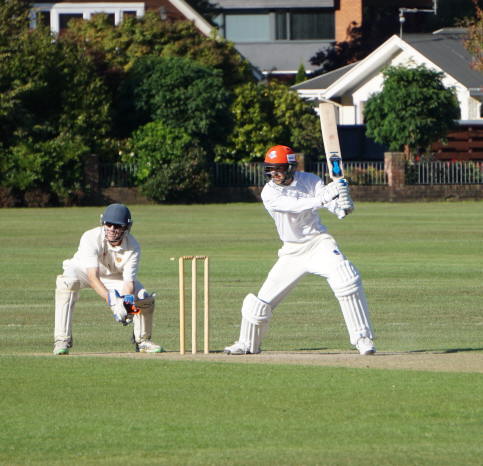 Chad Bowes completes a fine double in each innings

So the task was to knock off the 115 with a minimum of risk as an outright result not as important as avoiding a collapse and a loss. When Dylan Goldstone and Finn Loader again went early with the score at 37, there was some initial apprehension, but equally Chad Bowes was again looking in complete command at the cease as he did in the first innings. Content to defend the good ball he was equally punishing on the bad ones with his 54* scored at just better than a run a ball. When Matt McCall fell for 13 with the score at 79 we felt comfortable, and it was left to Chad and Talor Scott 30* to take the side calmly and professionally through to the required total with the loss of only three wickets. 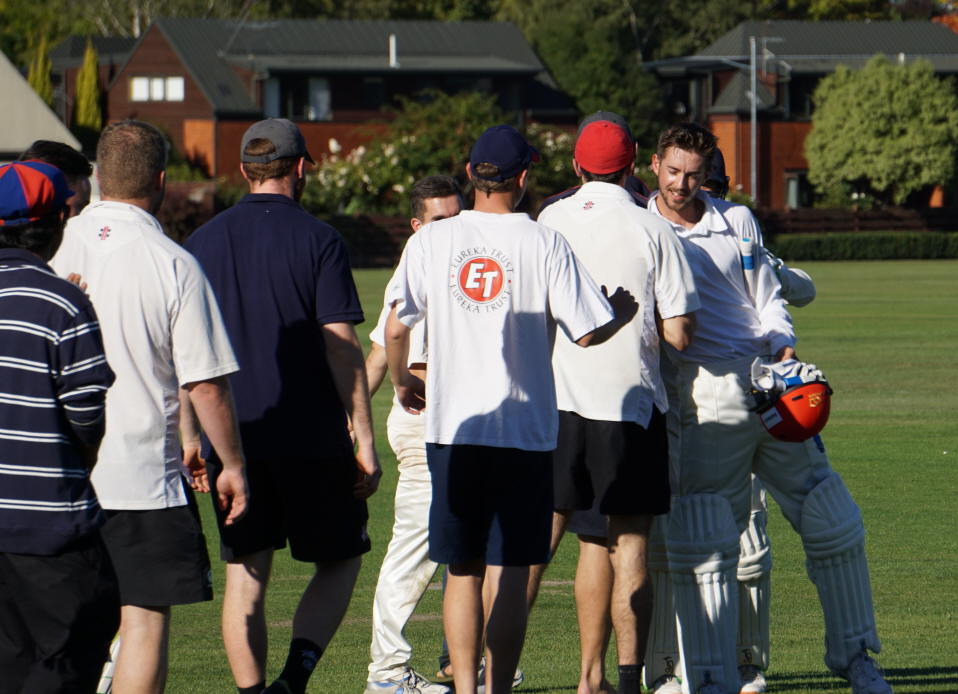 Chad gets the congratulations of his team mates

Watched on by the Sydenham Supporters Club members, and players from the 1985/86 Championship Winning side who had a reunion dinner the previous evening, immediately following the match Mike Fisher from Canterbury Metro Cricket presented the 2-Day trophy to Tom, the first Sydenham player to lay a legitimate hand on the trophy in 30 years. The champagne then flowed, mostly on any and everyone in the vicinity, team songs were sung (thankfully out of ear shot in the dungeons of the dressing rooms), and the party began.

So a magnificent season where the team also performed creditably in the T20 and 1-day competitions, but took out the one that really counts with six consecutive outright wins. The Club salutes its Premier team, you have done us all proud.