Cardinals’ 2016-2017 season finally got under way on a very soggy and very green Elmwood 3 against Old Boys Collegians. Ralphy won the toss and immediately announced his retirement, inserting OBC without hesitation.

OBC was under the pump early, Bull going for 1 after three balls and eight minutes when he inexplicably left one from Ralphy that did nothing much and skittled him. Iggo and Cusack persevered to 44 when Brownie caught Iggo for 13 off Ski. Cusack (50) was next to go shortly after drinks with the score at 78, flaying one through the covers off debutant spinner Mario Williams, only for Ralphy to pluck it out of the air one-handed as it sailed overhead. An early nominee for catch of the season, taller players would have made it look easy. A short-arse wouldn’t have had a chance. Lodge (18) was next to go seven runs later with the score at 85, caught casually by Laughts in the deep, again off Mario, before Mario caught Rochford (8) off Ski with the score at 105.

The last six OBC wickets fell for just seven runs – Hall for 10 off Flem, Borcoski sending Ballinger on his way with a well taken run out, Clayton (1) and Wilson (0) both bowled by Ski, with O’Connor the last to go in the 38th over for a four ball duck, caught behind by Waza off Ralphy.

Of the bowlers, Ski was the standout, completing eight overs with one maiden, 4-35, with Ralphy bowling 6.1 overs, three maidens 2-7. Brownie completed 8 overs unrewarded with one maiden 0-25, Mario eight overs, no maidens 2-24. Flem went for two an over off his eight, finishing with two maidens, 1-16. 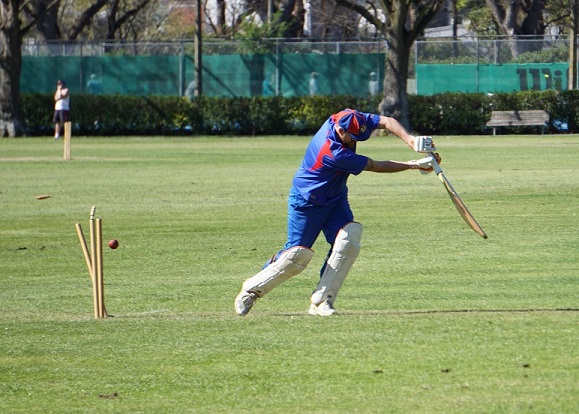 Into bat, and Bert’s instructions to Laughts to take his time and get established clearly fell on deaf ears, with Laughts raining four sixes, as well as a four and three (walked) singles in a 16 ball, 12 minute stay of 31, before he top edged a sitter. Fellow opener Mario compiled 13 before he departed, leaving new CMCA life-member Tim Murdoch compiling a patient 22 in an 81 minute stay. Waza was blatantly less patient at the other end, departing for two after three balls and two minutes, and Ski, batting at five, went for five shortly afterwards with the score at 67, leaving things looking interesting. Another Cardinals debutant, Paul Bennett, joining Cardinals after the demise of the Park side, made a patient one run 25 minute 24 ball knock, surviving two LBW appeals before he was caught. Brownie, set a challenge of scoring a 50 this season, put together a patient 16 in a 42 minute stay before he was caught and bowled, and with the score at 100,

Cardinals still had some work to do – and more so when Bert Walker, batting at nine, departed with the score at 104. With Ralphy at the other end, and with the rest of the team willing Phil not to get out, and with only Flem to come, Phil spanked the first one through the covers for two. He survived another 12 balls while Ralphy did the scoring at the other end – the pace of the pitch perhaps straightening Ralphy’s inevitable “challenge accepted” wog over cow to more over long off.

Cardinals home with two wickets and two overs to spare and a good win to grind out first up.

Man of the Match: Craig Borcoski