Sydenham are T20 champions again after a convincing win against Lancaster Park on Hagley 5 on Monday.

There was natural apprehension approaching this match but if skipper Chris Harris could have scripted how he'd like the match to go, he couldn't have asked for better. Sydenham won the toss on a wicket that appeared tired, and had been difficult in the semi-final on Thursday, and accordingly Harry had no hesitation in asking Lancaster Park to bat first. 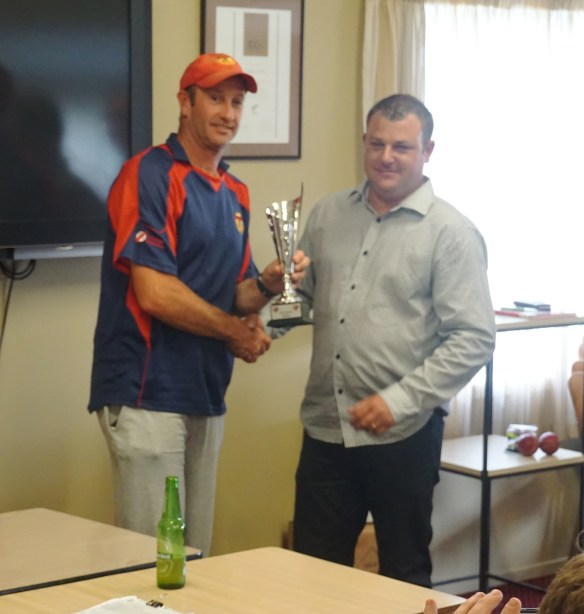 Park then lost an early wicket when Chris Cooper had Burnett out with the score at 9, and there was further encouragement shortly thereafter when Mitchell Gardner had Burnett's fellow opener Duggan caught by Ryan Wallace for 2 with the score at 16. However Canterbury rep Michael Davidson was in the process of compiling an accomplished run a ball 53 that was keeping the score ticking over at a respectable rate. That was until, with the score at 49/2, Ryan elicited a false shot from the no. 4 Marshall that resulted in a spectacle diving one-handed catch in close from Dylan Goldstone that arguably set the tone for the rest of the innings in Sydenham's favour. 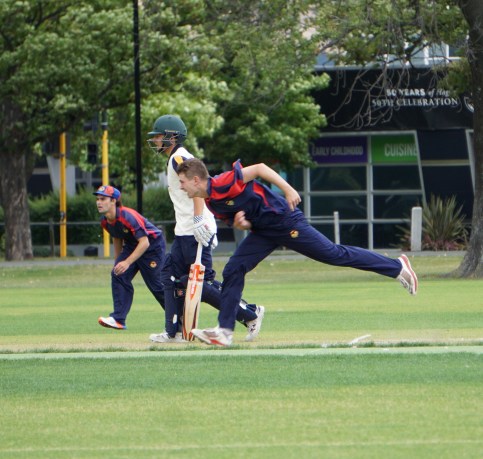 As they did in Thursday's semi-final on the same strip, the bowlers relished a difficult track with Coops, Ryan and Harry all picking up two wickets apiece and going at less than fives, but with all the bowlers contributing to the resulting squeeze. The fielding was again excellent and the speed to the ball to restrict two's was at times critical in maintaining the pressure - that pressure eventually triggered a capitulation from the Park middle and lower order such that 83/3 quickly became 110 all out in the 19th over. 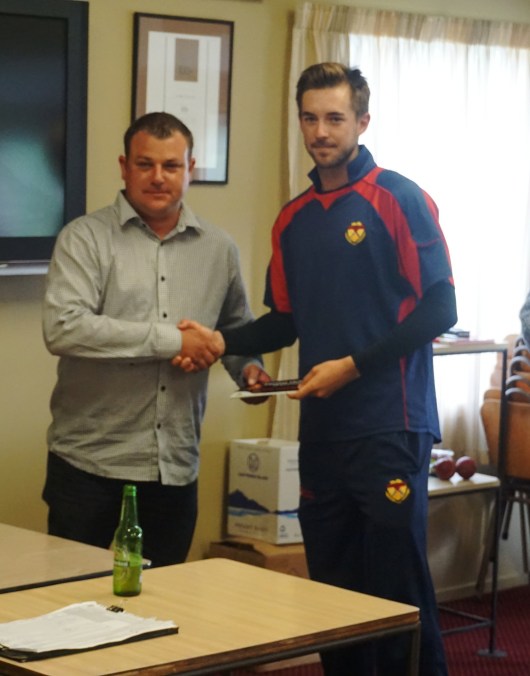 Chad Bowes receives the Man of the Match award

After our struggles to reach just 90 in the semi-final only four days earlier on the same wicket, it was with great relief that Chad Bowes and Dylan Goldstone then produced the classic open stand in the final. Chad, fresh off his half century for Canterbury two days earlier, played another match winning innings for Sydenham in a big match, as he did in the key two-day championship winning match last season at Burnside. His 42 off 28 balls was a classy innings full of strokes all round the wicket, including the odd reverse sweep that managed to elude the fielder, a performance that later saw him presented with the Man of the Match award. Between him and Dylan they put on 65 for the first wicket at close to 10 per over which realistically killed off LP's hopes by the time of Chad's dismissal. 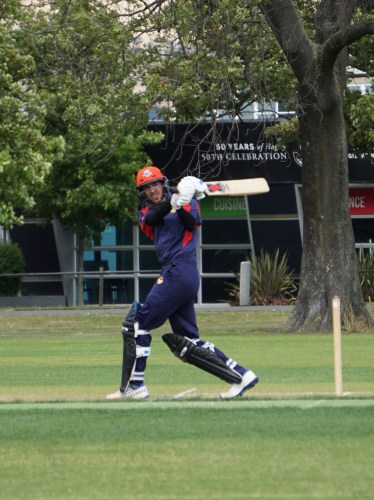 Chad Bowes puts one over the top of backward square

But those for us who were there for the semi-final, we didn't dare think that was the case. The position was similar to that match and at the point where we'd got the major wobbles and lost another five quick wickets. That was why Dylan's innings this time was so important - with Chad gone, it was incumbent upon him to bat through to the end safely, and that's exactly what he did. He has and will play bigger and more aggressive innings than this one in the future [37* off 61], but this one ensured that the good work from Chad, and earlier, his bowlers and fellow fielders, was not wasted, and delivered a championship final title for his team mates. Likewise when Ryan Wallace came and went for 12 off 8 balls, Lane Tutty also ensured that Thursday night was distant history by batting through with Dylan to reach the required total of 111 with only two down and five overs to spare. 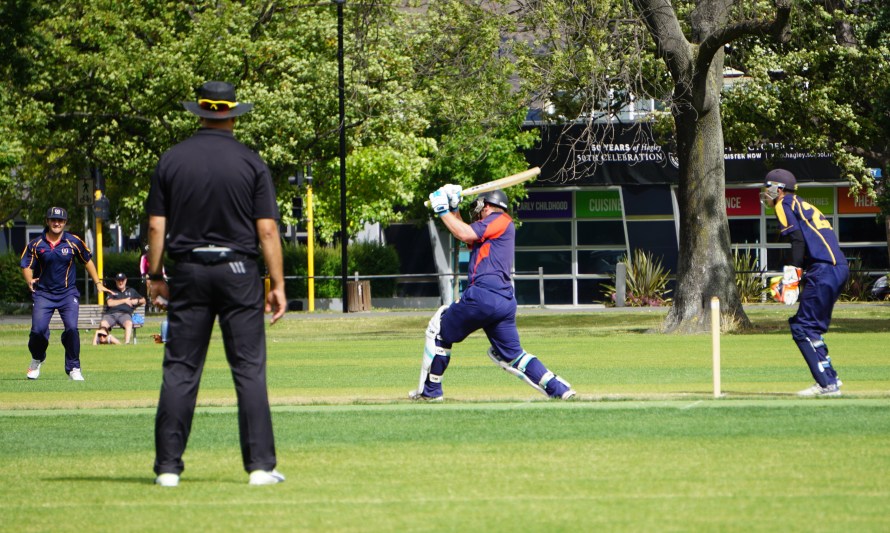 The nature of T20 cricket can sometimes produce lop-sided results and this one didn't do justice to Lancaster Park who were worthy finalists and the team that Chris commented in the presentation was one that they always had a good battle against. Nonetheless the completeness of the win confirmed Sydenham were themselves worthy winners of the title, a great all-round team performance where we expect that the players employers will need to be very understanding tomorrow morning. 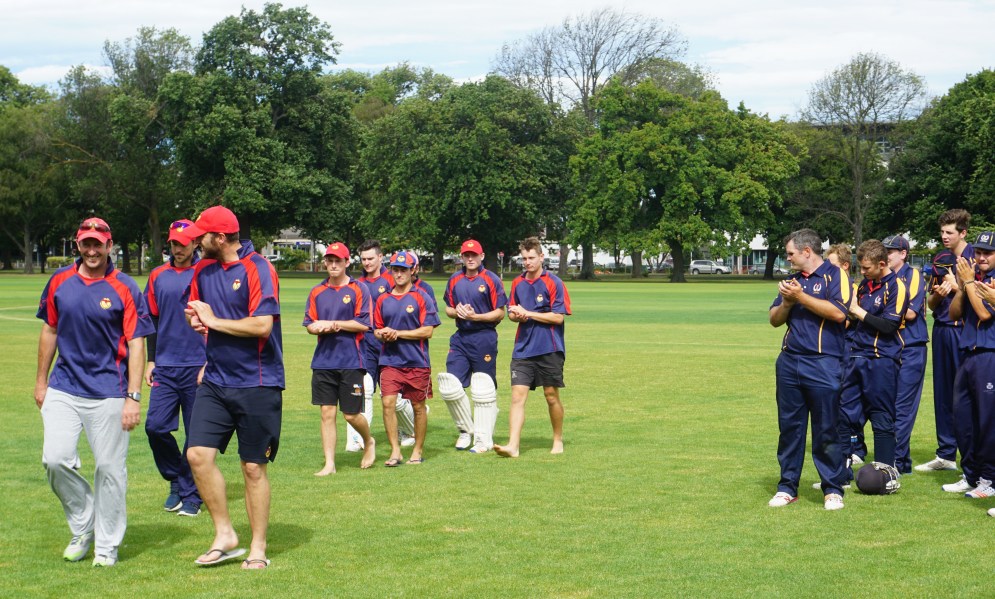