Sydenham Unable to Stave Off Defeat at Burnside Park

Fresh off their victory in the T20 final on Waitangi Day, the Premier Men reluctantly had to turn their attention back to the second day of their match against BWU at Burwood Park where they were in a very difficult position after a disastrous first day when they had conceded a 211 first innings lead to BWU after being bowled out for 90 in the morning session.

The only option was to fight hard to deprive BWU of the victory by batting out the day, and it was clear from the outset that there was a determination to do just that. After batting 40 minutes the previous week, Dylan Goldstone and Matt McCall got through another 30 odd minutes before Matt was well caught at gully [23 off 75 balls] with the score at 42. 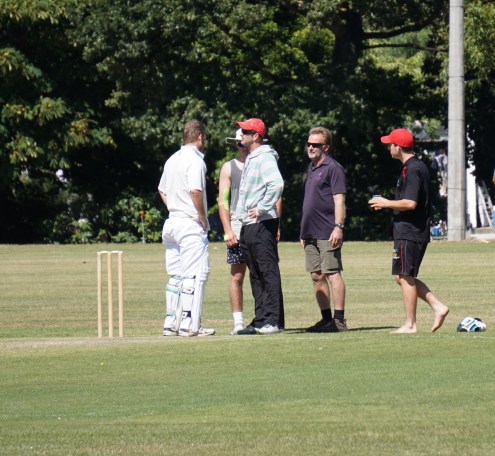 In situations like this one a hard headed approach is always best and no one can deny that Dylan wasn't displaying one. Determined to bat through, he had his helmet knocked off on the evening of the first day, and then on the second day, took another knock flush on his jaw before shortly thereafter going down again when struck on the helmet for the second time in the innings. A match delay while concussion tests were held saw him resume his innings without leaving the field. 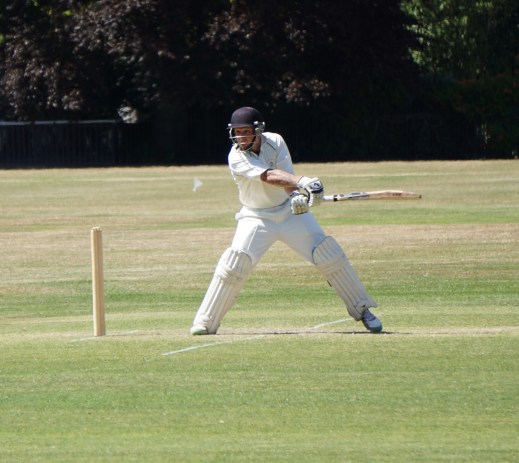 Others came, fought hard and left; Stu Naden 25 balls for just 1 run, and Ryan Wallace was all dedication with his 11 off 68 balls. However, when Dylan [43 off 88 balls] eventually fell just 40 minutes out from lunch after a two and half hour contest with the BWU bowlers, the task became alot harder. The afternoon session saw all the batsmen dig in right down to no. 11 and try to bat out time, with Matt Brown [39 off 78] probably the pick of them in that session. However, the task was just too large and eventually they couldn't quite get to the 211 required to make BWU bat again as they were bowled out for 198 close to the tea break. 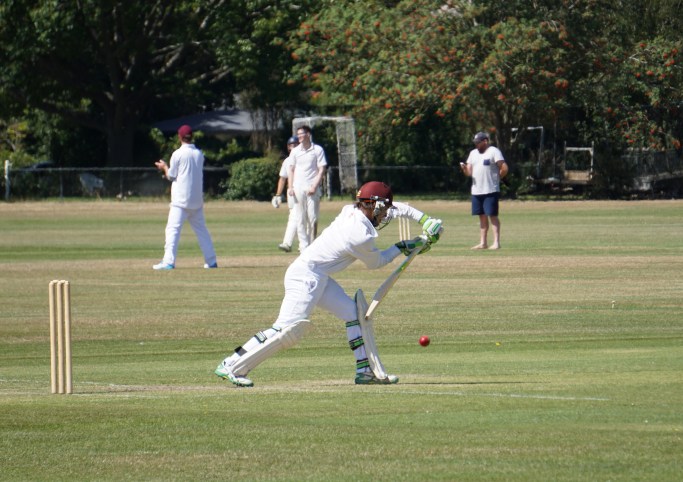 Ryan Wallace defends another one in his 68 ball innings

The result was probably always the more likely one on the day with the BWU bowlers striving hard all day and picking up the just enough wickets at the right times to keep themselves in the favoured position. With OBC winning match outright against Marist Harewood, they now take a commanding lead in the competition with a log jam developing below that in 2nd and 3rd. The Prems are now scheduled take on St Albans at Sydenham, although that venue may be questionable depending upon the timing of park upgraded that should now be close at hand.

Although it wasn't a great day for the Prems, it was a pretty successful one for many of the other eleven club teams. Although the Prem Women don't play until Tuesday, the Division 1 woman carried on their winning ways when they restricted Heathcote to 65/7 [Alana Topping 3/12] and then got those none down with Alana capping off a good day with 32*, and Nicole Hurd 23*.

The 2A's had a great win on Sydenham 1 when they beat a strong Riccarton side outright that already had already won the one-day and T20 titles this season. Behind by 41 on the first innings, Syds bowled Riccarton for 136 in the 2nd thanks to Carl Hooper's 6/61 and Scott Grose's 3/37. Set 178 to win, the Day boys dominated the reply with Hayden [75] and Matt [58] taking the team through to a four wicket victory, and likely up into 2nd or 3rd place with two full rounds to play. 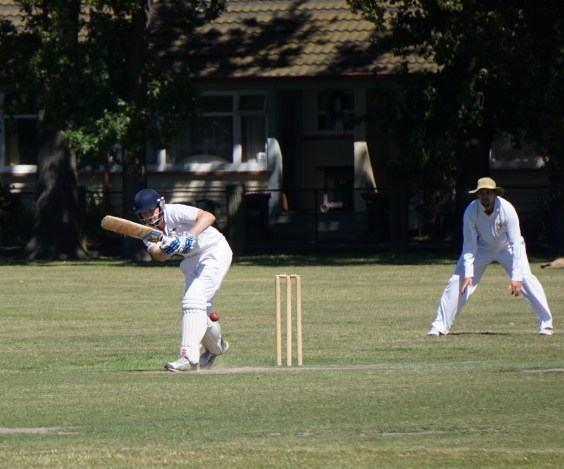 Hayden Day together with brother Matt chase down Riccarton's 178 lead

The Presidents Cardinals for the second time in as many weeks managed to recover a faltering run chase to beat Merivale Papanui on Sydenham 3. The season debut of Julian Van Dyke [2-27] saw the Pressies bowl MP out for a respectable 178 [Phil Walker 3/33] and in response Sydenham got there six down thanks to Phil Walker's [64] ongoing run of good form, and Anthony Wild's 52* batting way too low at No. 6. The win puts them into 4th place and in contention for the top four cut-off soon.

The 3D Cardinals also won to move into outright 2nd place after they scored 133 [Colin Paintin 40*] at Centennial Park and then bowled New Brighton out for 110 [Ben Hartland 5/14].

The 4A All Stars had a comfortable win over Scots Raiders when Joseph Bruce [3/16] an Abe Atherton [3/21] held them to 8/90 and then got the runs seven down with the main contributions coming from Zach Wall [43] and Paul Jensen [23].

The T20 Blues had a good battle at Centennial where they beat Burnside by two wickets. Burnside scored a solid 173/6 with the wickets evenly shared, and then Sydenham chased down the total thanks for Balkaran Singh [34], Jalay Singh [40*] and Rahul Singh [40*]