The Prems started the second day of their match at Garrick Park against Lancaster Park just two wickets down and a handful of runs behind Park’s first innings total of 174.

There was another hour delayed start due to the early morning dizzle, but once play started Park then had the better of the early exchanges as Sydenham lost another four wickets cheaply. However, Tom Hewison was always in control of the situation as he worked his way through to 77* at the end of the 60 overs with Sydenham finishing with a first innings lead of 76 runs. 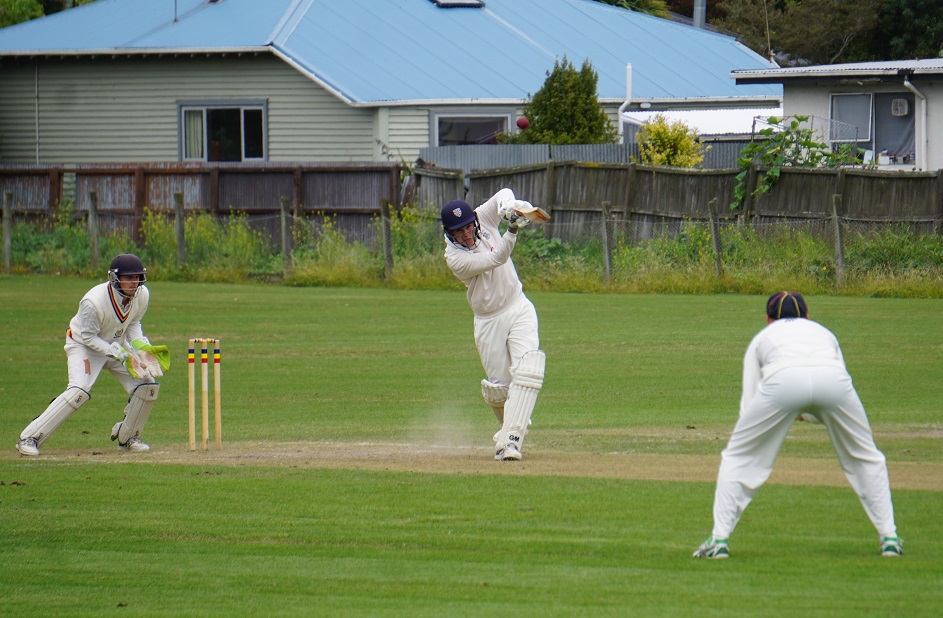 Park then batted very well in its second innings. Sitting in 2nd place in the competition and to keen to put themselves in a position with a chance to win, most of their top six got good starts and scored at a good clip to get them through to 247/6. The declaration left Sydenham with a target of 172 to win in 35 overs. Parks’ gamble almost immediately appeared to be paying dividends when they sneered both Sydenham openers with the score at 16, and wickets started to fall regularly. Tom Hewison again stood tall contributing another 44 runs to go with his 77 in the first innings but when he fell, and then Ryan Jones shortly thereafter with the score at 93/6, the Sydenham run chase was in real trouble. 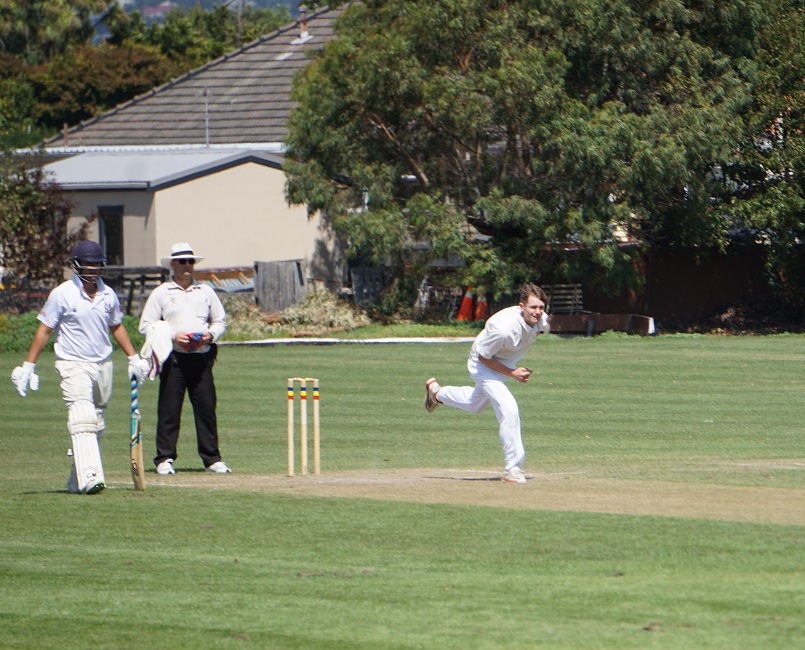 However, Finn Loader has run into some good form recently and has become the go to man when the pressure is on. In conjunction with Stu Naden they both proceeded to get Sydenham back on track by putting on a critical 34 runs for the 7th wicket. Stu’s 22 runs off 19 balls, including two sixes, was a vital cameo in the context of the match, but when he left with the score at 127/7 with the required run rate still around six, the pressure remained. Finn and Tom Agnew then put on another 35 for the 8th wicket but with Finn in control and hitting three sixes in his innings of 44*,the equation got down to three runs required off the final over. Then when Finn hit his third six over long-on off the second ball of the over , Sydenham had secured the victory amongst much celebration. 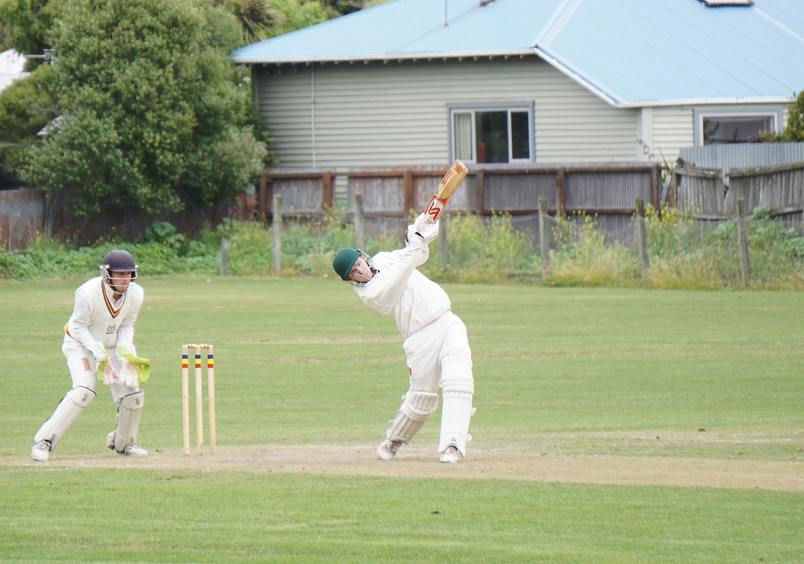 Another boundary to Stu Naden in Sydenham’s push to victory

So an excellent match, be it fiercely competitive and emotions running high at times, but much credit must go to Lancaster Park for the declaration that kept the match alive and so nearly paid off for them. Sydenham now move into 3rd place with three matches to go in the season, the next being against BWU at Hagley 4 on Saturday.

The Premier Women lost by 5 wickets in their 6 aside match against OBCC at llam. Sydenham batting first could only score 66/5 with Eden Pettigrew top score with 19, which OBCC then got for the loss of only one wicket.

The 2As finished their 2-day match against Riccarton at Burnside Park with a loss. Riccarton had scored 211 on the first day (Scott Grose 5/46) and Will Graham (2/39) but had then conceded a 1st inning deficit of 73 runs. Riccarton scored another 201/7 in their 2nd innings (Scott Grose finishing with 10 wickets in the match with another 5/61) which left the 2nd’s with a target of 274 in 54 overs. After losing two early wickets they couldn’t quite bat out the rest of the day with the highlight being newcomer Matt Craigen top scoring on his debut with 57.

The 3B Goats will feel like they missed a great opportunity for a win against Southern Districts at Waltham Park. Batting first Southern Districts collapsed to be all out for 63 (Alex Brailey 3/13 & Andrew Moulton 2/6) but the Goats struggled in reply to be bowled out for 53 with only Andrew Douglas (18) and Heath Saunders (17) getting to double figures.

The 3D Cardinals also lost by 36 runs to Southern Districts on Beckenham Park. Southern scored 174 all out batting first with James Gallagher the pick of the bowlers with 5/39. The Cardinals reply never got really underway with only Kieran Williams (25) and Jamie Livingstone (40) batting at no. 9 looking like giving them a chance for the win.

The 3D Sydenham All Stars also lost by 5 wickets against OBCC on Elmwood 4. The All Stars batting first were bowled out for 132 (Abe Atherton 39) and OBCC lost five wickets reaching that total.

The two Presidents side both had victories. It was an emotion match for the Cardinals with news of the death of one of their players in Brendon Laughton earlier in the week which has seen a minute silence taken at all four Presidents matches in Christchurch. 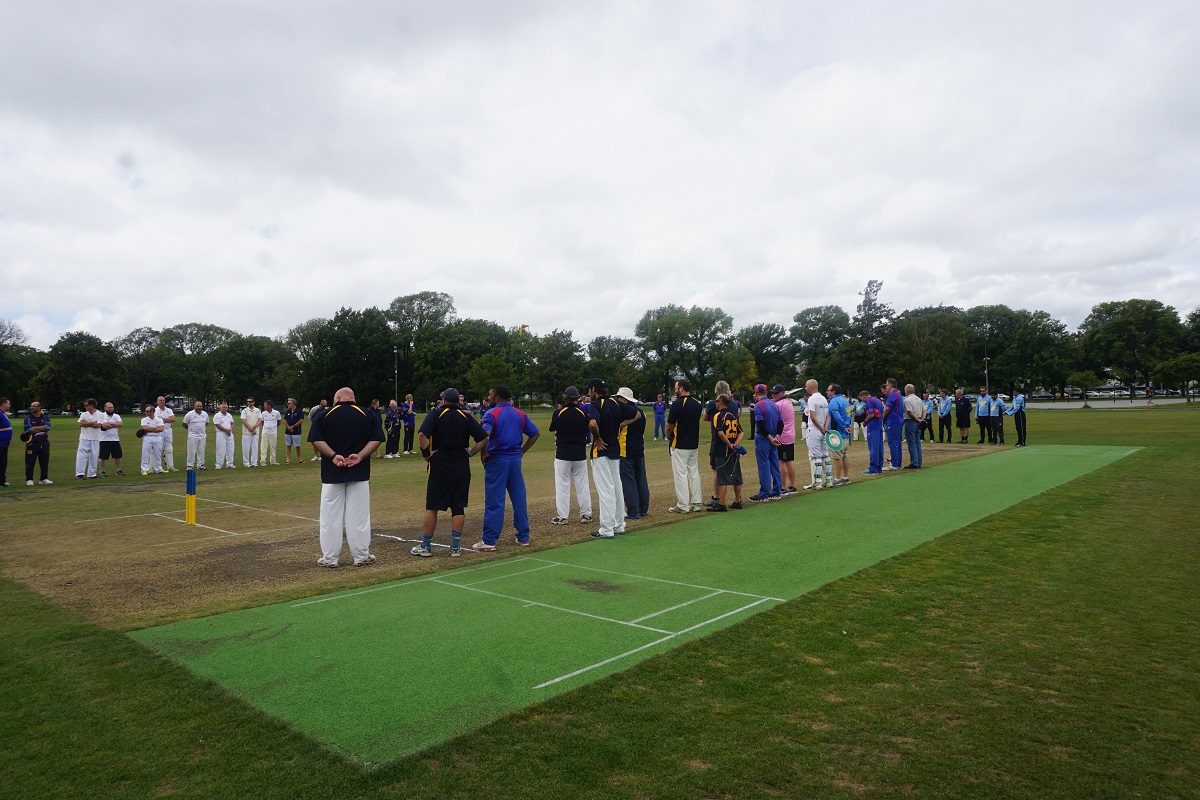 A minute silence for Brendon Laughton

Sydenham elected to bowl first on Hagley 3, and with Dave Fleming the best of the bowlers with 3/22, they restricted East Shirley Blue to 156 all out. Despite the loss of an early wicket Dave Hardy (47) and Anthony Wild (33) recovered the position quickly, and with a 24 from Phil Walker looked on target until two quick wickets had them seven down and at risk. Up steps Bert Walker and with a quick 20* took Sydenham through to victory with three overs to spare. 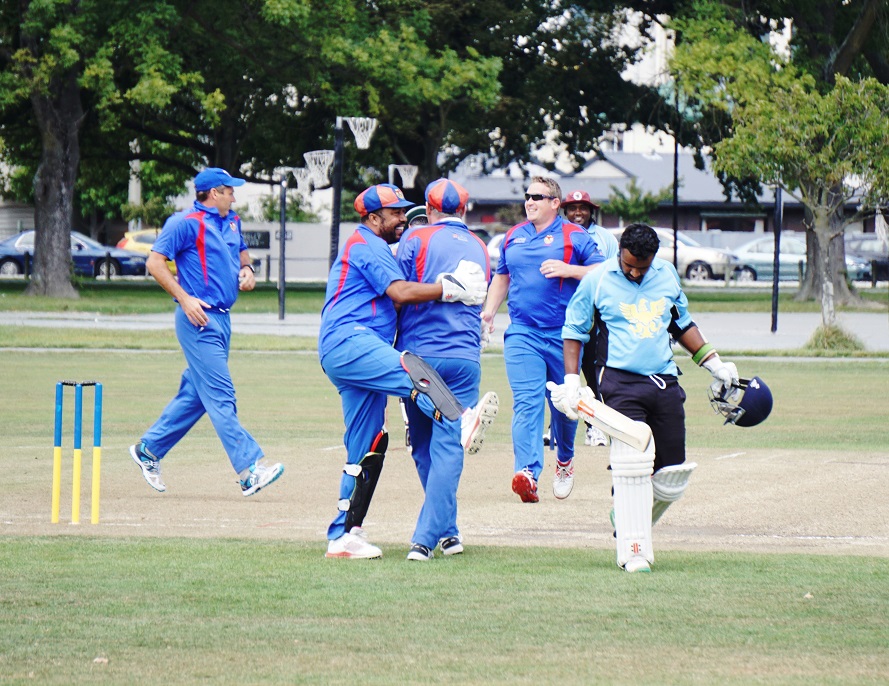 Hospital had another good win against Hornby at Denton Park. In a low scoring match Hornby only managed 104 as Kulem Mendis took 4/6 off 6.4 overs (and his 23rd wicket of the season to lead the wicket takers in the afternoon grades). Richard McKinlay also took 3/26. Hospital got off to a good start through openers Richard McKinlay (27) and Bill Day (17), but the loss of quick wickets put the win in doubt until Rex Venning struck a fine 40 to get Hospital through to the total eight down.

The Sydenham Tamils capitulated in their T20 against Heathcote at Hillsborough Domain when they were held to 50/8 with no one getting to double figures. Heathcote carved off the runs in less than 10 overs for the loss of three wickets.

With the Youth First XI having already played a match or two, the rest of the Sydenham Youth teams played their first matches on Saturday. Details:

Christs’ batting first in the first innings went from 132-3 to all out for 146, with I Prasad wrapping up the tail with 3 wickets for 0 runs, D Watt 3/39. Sydenham batting was progressing well in their first innings with good fifty from P Pagadala (52) supported by J Wells (26), however a quick procession of wickets after this partnership resulted in a 26 run first innings deficit. Good bowling by the team in Christs’ second innings had them at 79 for 9, D Watt taking 6/23 & J Wells 2/22 – along with a great outfield catch by J Thyne, however a 10th wicket partnership of 45 resulted in Sydenham needing to chase 150 in their final innings. The Sydenham batting didn’t really get going, with only Henry Boyd-Tibbotts batting well for 39, and the team fell well short of the target.

Sydenham Youth meet Boys High (Blue) at Polo 3 in Hagley Park. Winning the toss Boys High were inserted and were quickly 30/4 after 7 overs with T Owens (2/10) and B Wasley (2/23) knocking the top off their innings. P Cameron then joined the attack, took 4/19 and Boys High were all out for 79 before drinks. T Owens already in the running to win catch of the season with a screamer of a catch diving full stretch to haul in a catch at mid-off. O Smith 41* and H McMeeking 24* opened the innings and scored the winnings run in 9.5 overs. O Smith ending the match with a straight driven 6. 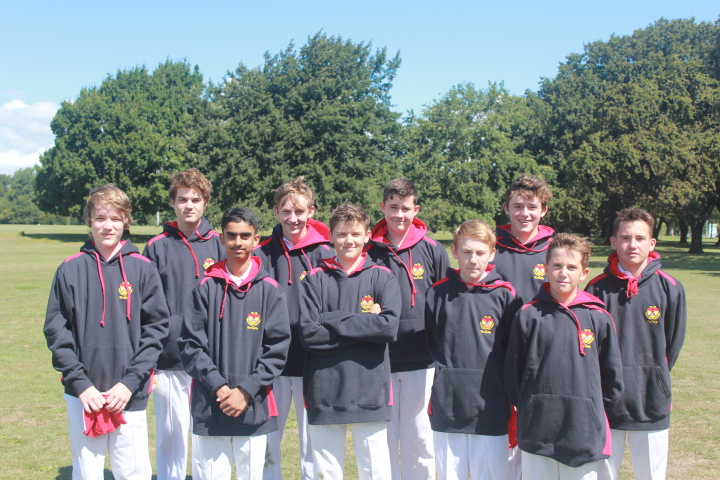 Boys High (Blue) batted first at Cashmere High School. They were 20/4 and eventually all out for exactly 100. Bowlers of note were Jamie E with 3/21 and Issac M with 3/16. Sydenham Youth posted a 1 wicket win getting through to 105/9. Issac M also top scored with 48* 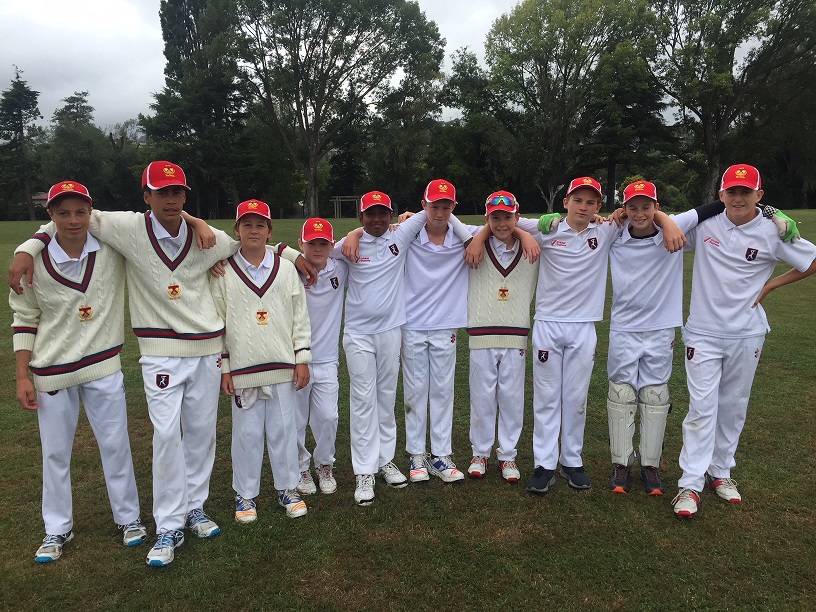 Sydenham 9b Blue played CBHS Green at Riccarton HS on a grass wicket. CBHS only had 8 so we gave them 2 fielders. Sydenham Youth won the toss and fielded. The boys bowled and fielded well and we knocked the top off their order quickly. The bowling was shared with all 9 who wanted to bowl getting two overs is a innings that only last 19 overs. The wickets were shared by 7 bowlers including – T Newton 3/3, Sam Prasad 2/5. Our top 4 batsmen did a good job and we chased down their 59 in 8 overs. J MacDonald 22* and Sam Prasad 20*. 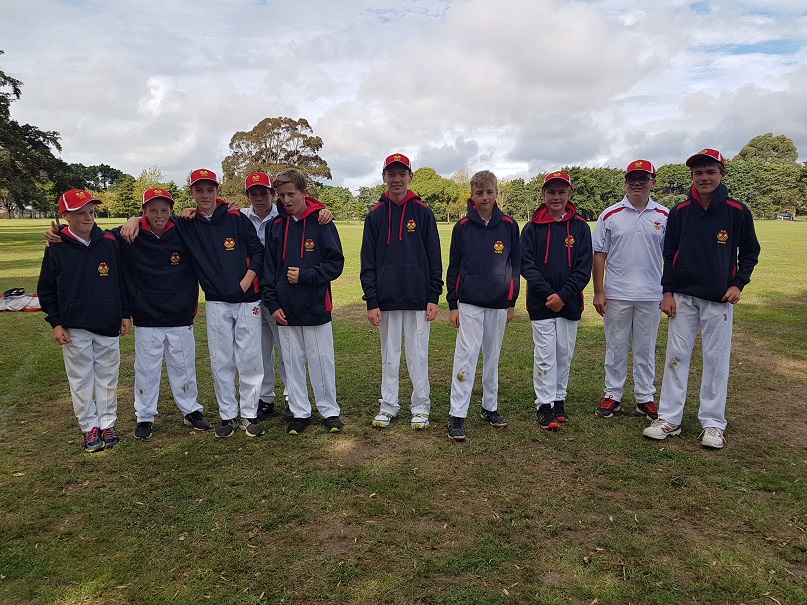