Prems Win Again as Top Three Clear Out from the Rest

Sydenham started the second day against BWU on Hagley 3 with a first innings lead of 55 runs which Burnside had whittled down by 10-15 in their second innings at the end of the first day.

Early wickets were required if Sydenham were to keep the momentum going, and initially they didn’t come. The two BWU openers batted well before the first wicket finally fell at 42 when Mitch dismissed Martinus Hyser. Two more quick wickets then had BWU on the back foot at 66/3 and it became a battle for BWU from there. 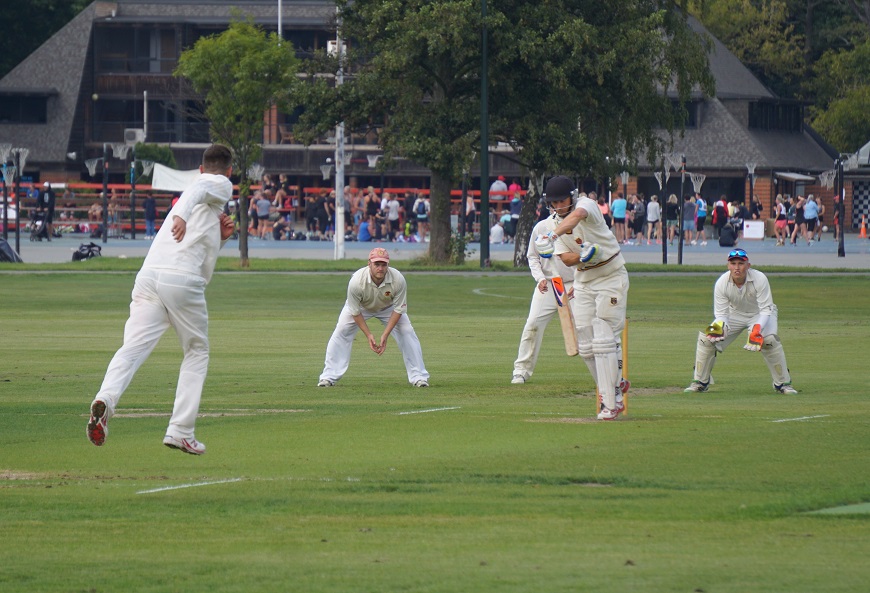 The BWU No. 5 Naude tried to hold the innings together but no one from six down could get to double figures in support and BWU were finally bowled out for 151. The best of the bowlers was Tom Agnew with 3/36 but all the others got a couple each in a shared bowling performance backed up by a couple of useful catches

With Sydenham set just 97 to win, BWU were clearly not ready to concede the match as their two premier bowlers in Matt Farrant and Scott Inglis bowled excellent opening spells. They made life difficult for the early Sydenham batsmen with the first wicket of Dylan Goldstone gone with the score at 8, then Tom Hewison at 20, followed by Chad Bowes at 28. At 28/3 there was suddenly some tension. 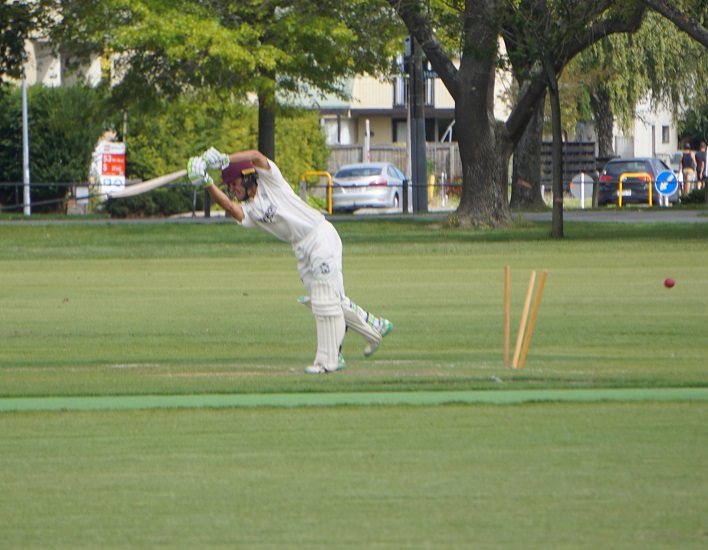 However, Ryan Wallace and Matt McCaw then came together and shared a critical 63 run 4th wicket partnership. They careful ly fought their way through the remaining Farrant & Inglis overs before settling in comfortably and taking the score through to 91 before Matt was dismissed in his final match of the season before heading overseas. Ryan Wallace had played a gritty determined innings for his team to ensure the win, and it didn’t seem fitting when he followed Matt shortly thereafter with the match well and truly won.

With only two matches left to go in the season the Premier competition seems to be settling into a three horse race for the title. St Albans is comfortably in 1st place about 19 points head of Lancaster Park in 2nd,who in turn is about 6 points ahead of Sydenham in 3rd. Sydenham plays Saints in the final match of the season but it would require Saints and Park to lose both of their matches for Sydenham to have a chance to take the title. Whilst St Albans remain clear favourites, Park also lurks as strong contenders to come through the middle if there is a drawn Saints-Sydenham match on the final day of the season – it all makes for an exciting final couple of matches with everything to play for.

The Premier Woman had a disappointing day when they were bowled out for 44 on Garrick 2 against LPW with only Jodie Dean (17) getting to double figures. In reply LPW took the win by 6 wickets with Gina Aldersley taking 3/6.

However, the Division One Women had a win against Heathcote at Ferrymead Park. Despite only scoring only 46/7 thanks to Linda Pettigrew’s  25, they then restricted Heathcote to 21/7 to take the win. 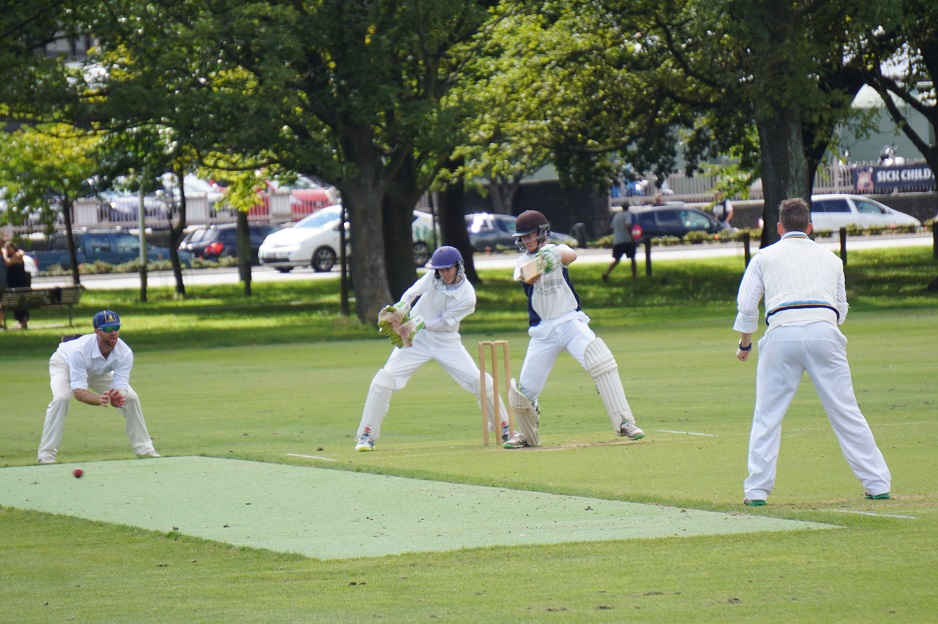 Suddenly Sydenham got their first win of the 2-day competition when they beat Southern Districts at Waltham Park. On the first day Sydenham had dismissed SD for 66 (Michael Nicolson  6/22) and taken a 75 run lead when Sydenham scored 141 (Joshua Morgan  32 & Marty Crook  24). In their 2nd innings SD struggled again to be bowled out for 99 (Michael Nicolson  3/38, Patrick Wickes  3/21 & Alex Landeshwar  3/7), and then knocked off the required 26 runs for the loss of three wickets.

The 3B Goats had a victory cliff-hanger on Centennial against Heathcote where Oliver Philpott starred. With Jon Bennett, Jonny Shaw and Oliver all getting a couple of wicket each Sydenham held Heathcote to 120/8. But in reply Sydenham were in trouble until Oliver scored a 72* batting at No. 7 to bring his team home by one wicket

The 3D Cardinals looked well set when Eugene Hawyn’s 5/27 had New Brighton dismissed for 93 at Centennial Park. However scores of close to 100 are often good enough at Centennial and New Brighton run out the winners convincing when the bowled out the Cardinals for 51 in reply with only Richard Hemmingway’s  15 the only score in double figures .

The 3D Sydenham All Stars went down to Parklands at Parklands Reserve. They were dismissed for 112 batting first (Abe Atherton  29 & Christopher Reeve  27), with Parklands running down the total for the loss of five wickets.

The Presidents Cardinals were desperately unlucky to loss their match on a typically inadequate Centennial Park wicket. Asked to bat on a damp wicket Sydenham could only muster 85 runs with Phil Walker top scoring with 28. In reply MP struggled throughout their innings with both Julien van Dkye (3/28) and Jeremy Brown (3/15) keeping Sydenham in the match. However, needing 11 runs with the last pair at the crease, MP eventually took the win. 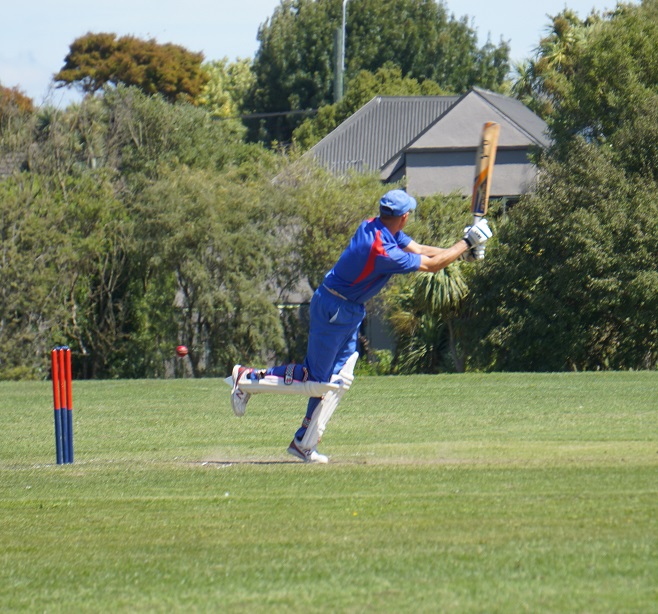 Captain Phil Walker topped scored for the Presidents with 28

The Sydenham Tamils lost their match to the Buffalos CC at Warren Park when they could only muster 80/7 in their 20 overs (David Jayapaul  34) and the Buffalos reaching that target in 13 overs for the loss of two wickets.

The second day against St Bede’s 3rd’ XI started well as Sydenham took consistent wickets in St Bede’s final innings (Daniel Watt  3/47, Preetham Pagadala 2/24, Harrison Boyd-Tibbotts 2/7) - however a match winning last wicket partnership of 90 runs turned the match. Chasing 126 for the out-right win, a determined effort of 33 from Sydenham opener Jaime Thyne and 22 from Tama Morrison were the only bright spots as the remaining batsmen struggled to find runs. However the boys managed to keep the target within reach thought-out the second innings, but the game ended with a tantalisingly close loss by 26 runs.

When your teams highest scorer is “extras” you really want to hope that this is because the oppositions bowlers have lost their ability to bowl straight or their keeper can’t catch. Sadly, neither was the case this weekend for the Year 10’s. You know the cricket gods aren’t looking on your favourably when you’re down to 9 players two hours before the match starts when a player pulls out with illness and another player who said he’d fill in decides he now can’t be bothered playing. - what is it with kids these days? A 9 man Sydenham Youth year 10 team were inserted on a pleasant afternoon against the Shirley Boys Colts at Catholic Cathedral College. Wickets started to fall consistently and in the 22nd over the team was all out for 49. Only one player made double figures and “Extras” totalled 25. Shirley Boys knocked off the runs for the loss of 1 wicket after 8 overs.

The 9As met Christs College White on the artificial wicket at Cashmere High. Sydenham won the toss and inserted Christ's and then a first wicket partnership of 55 had Christ's well set to build a good score. However wickets then started to fall and Christ's managed to bat out their 45 overs getting through to 153/9. (2 wickets each for Jamie Ehau, Issac Milne and Toby Hull). Early wickets had Sydenham 19/4 in reply but solid middle resistance led a fight back with Ben Mason (45*) and Toby Hull (34) almost managing to get the team home themselves. A flurry of three quick wickets saw the team start to get nervous but Ben Mason and Jamie Ehau then batted well to take Sydenham through to the win with one wicket to spare in the 40th over.

Sydenham 9B Red played against Christchurch Boys High Gold (CBHS). The toss was won by CBHS and they elected to bowl. Both teams were disadvantaged by the state of the grounds due to long grass. Sydenham got a slow start losing 3 wickets in the first 5 overs but then had a partnership between Jacob Tauamiti (35) and Jermone Crichton (31). We only had 9 players and the other team kindly allowed us to bat 2 players that had faced the least balls. We were all out on the last over leaving CBHS chasing 178/10. CBHS lost 2 wicket early then had a strong partnership but our bowling and fielding let us down today. CBHG ultimately winning 4 wickets after 25.2 overs.

Sydenham played CBHS Green for a second time in 3 weeks. We played in blustery conditions at Westlake Park, winning the toss and choosing to bat. In an action packed innings with a mankat, helmet hit by fielders, and direct solid hit to wickets but bails not removed; we reached 261/7 with Fergus Ord and Jack MacDonald both scoring 64. We then bowled CBHA out for 96 with Dom Gilmour taking 3 wickets for 13 runs off 3 overs.