The first day of the penultimate round of the season left the match reasonably balanced at the close, but with Sydenham probably feeling that they’d let slip an opportunity to have been in the dominant position.

Tom again keep his impressive record intact by winning the toss and asking OBC to bat on a Hagley 4 wicket that had plenty in it for the bowlers early on. However, although the OBC batsmen played and missed alot, and lost some early wickets to be 41-3 at one point, with their Canterbury players back their experience middle order lead by Cam Fletcher consolidated the innings and fought their way through to a creditable 226-5 by the end of the 60th over. Carl Hooper with 2-32 and Ryan Wallace with 2-53 were the main wicket takers. 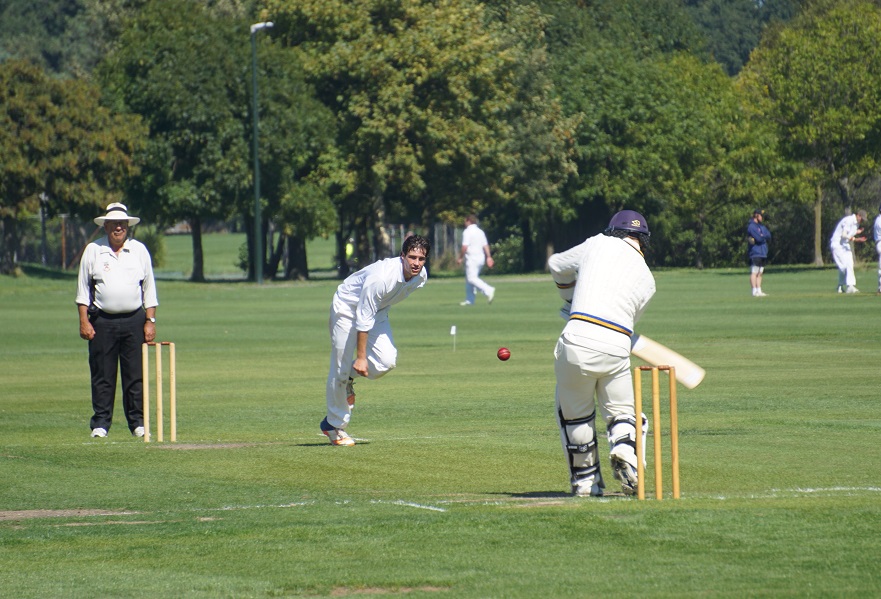 The Sydenham reply started badly when Chad Bowes fell early with the score at 4, but then Dylan Goldstone and Tom Hewison put on 73 for the 2nd wicket to steady the innings. Dylan’s five sixes in his 49 maintained a run rate whilst Tom with 33 off 58 balls played the steadier hand. When Tom departed at 77, and Dylan soon thereafter at 90-3, another partnership was needed and it came from Ryan Wallace and Lane Tutty. Ryan continued with his good form scoring another 40 whilst Lane, determined to contribute more with the bat, scored a valuable 29 off 65 balls. 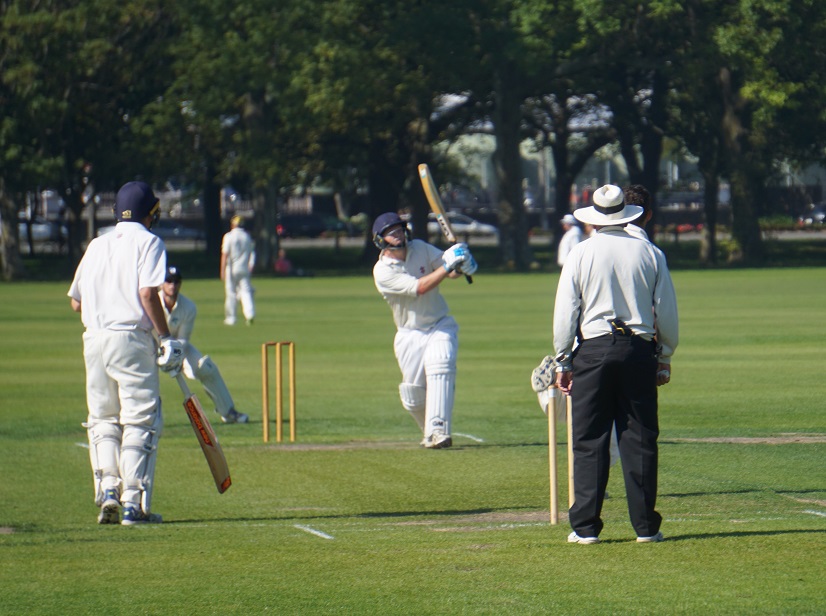 With Sydenham in a strong position at 159-3 and only a couple of overs to go, Ed Nuttall bowled Ryan and then on the last ball of the day Lane fell LBW for the team to finish at 159-5.

So a good batting performance tarnished somewhat by the two late wickets, and that together with some good batting and some good luck for the OBC batsmen in the morning session that avoided an early rout and a score under 200, Sydenham couldn’t quite gain the upper hand on the day – a match now very much in the hands of the two captains, with the second day Sunday due to the England game against the Black Caps on the Saturday. 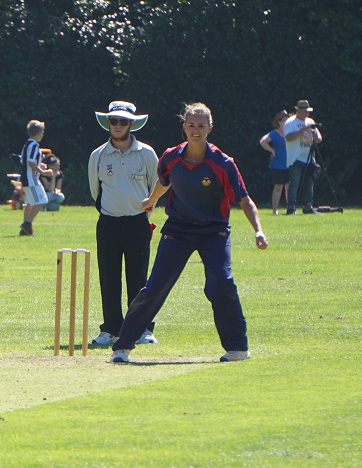 Unfortunately the 2As match isn’t well placed after Sydenham were bowled out twice on the first day of their match against BWU at Burnside Park. After losing an important toss and being asked to bat first Sydenham were bundled out for 84 with Pankaj Bhagat the top score with 21. 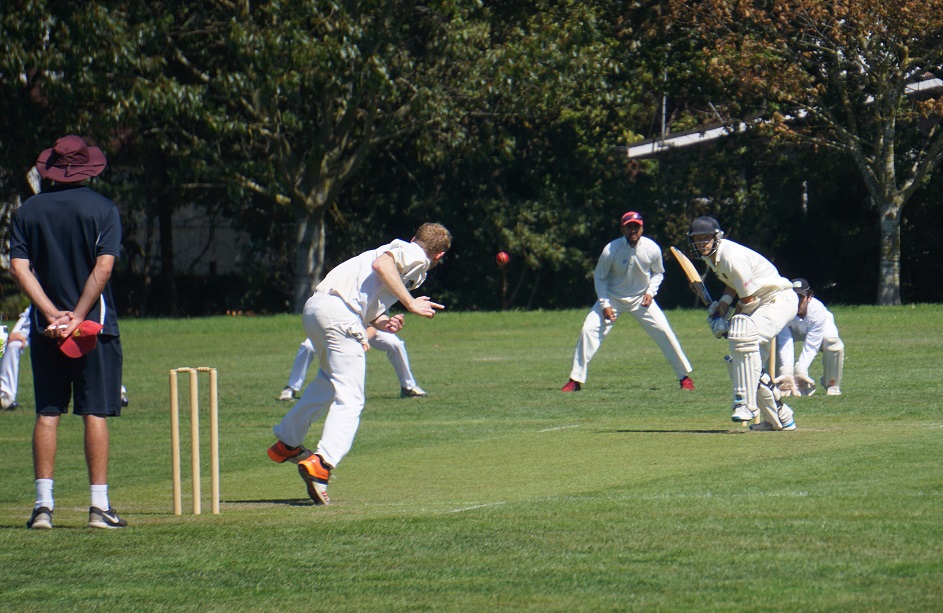 Scottie Grose tries to recover the match for the 2As

Sydenham then did well to hold BWU to 131 in their turn to bat (Scott Grose  3-35 and two apiece from Hayden Day and Grant Fortune), but again later capitulated in their second innings for 71 (Pankaj Bhagat  23 & Rohan Jangam  20). Chasing 118 for victory BWU were 28-0 at stumps. 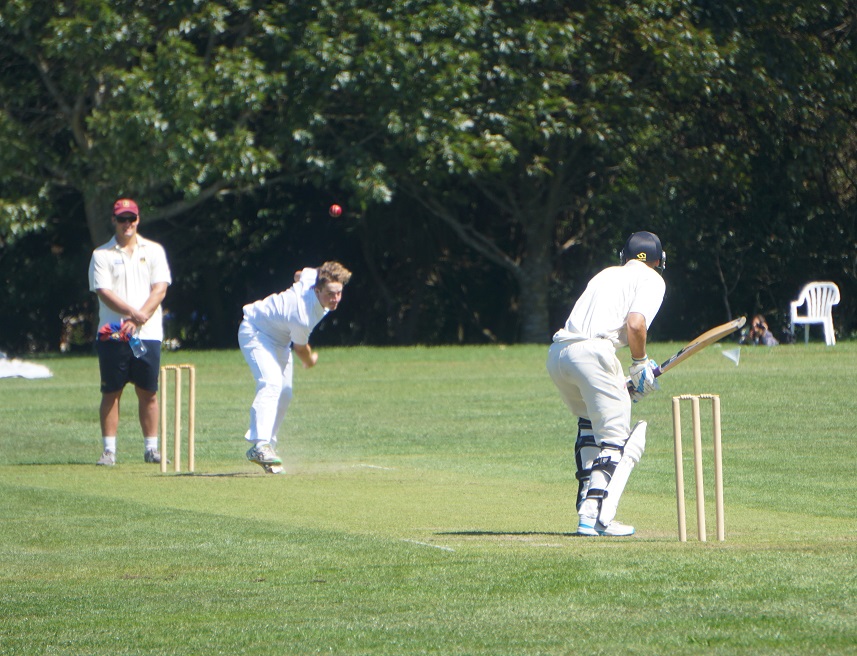 In contrast the 2C Suddenly Sydemham boys had an excellent day against BWU on the same park when they managed to win the toss, inserted BWU, and rolled them for 121 – main wicket takers Michele Nicolson (4-34), Paddy Wickes  2-41, Jim Simpson  2-20 & Alex Lankeshwar  2-8. Sydenham scored 151 in reply with Andrew Moulton (34) and Alex and Josh Morgan both 31. In their second innings BWU were 10/2 with Paddy getting both wickets.

The 3B Goats lost to New Brighton at Rawhiti Domain when new Brighton scored 172 all out batting first (Chris Douglas  4-25), but despite Tony Danenburg’s  40 from opener, and Oliver Phillpott’s  30, the Goats only reached 103-9 in reply.

The 3D Cardinals won the local derby match against the Sydenham 3D All Stars. A 51 from James Stokes was the main contribution to the Cardinals score of 138 at Somerfield Park which proved too much for the All Starts as Jamie Livingstone’s  5-21 saw the All Stars fall 79 runs short when bowled out for 59.

The Presidents Cardinals match was over early when the Cardinals lost the toss on the never fun Centennial Park and were subsequently bowled out for a paltry 59 with Dave Hardy’s  14 the only double figure score. Knowing what they were chasing St Albans then ground out the required 60 runs without the loss of a wicket.

The Hospital side had a much more competitive match against East Shirley Blue also at Centennial. Batting first Hospital managed to get to 139/7 primarily thanks to an excellent opening partnership between Bruce Day (41) and Eugene Hawyn (39) with Rex Venning’s middle order 29 also contributing. However Easts managed to get to their total eight down with 2-3 over to spare.

St Bedes 4th XI won the toss and put Sydenham Youth 1st XI into bat on a green and patchy pitch on their home ground. Sydenham struggled to make any real progress early, but late scoring by Henry Boyd-Tibbotts (24) and Orion Lynch (21) created a respectable total of 121, given the pitch conditions. St Bedes just secured first innings points by 11 runs, despite a couple of great catches from Zaran Banoori and Isaiah Prasad and Joseph Wells bowling of 4 for 11. At the end of day one the match is evenly poised with Sydenham at 49/2 in their second innings.

Sydenham Youth Year 10 met the Riccarton High School composite Year 9-10 side on Riccarton High no.2. Riccarton won the toss and choose to have a bat a decision they may have regretted after finding themselves 6 for 3 after 2 overs. They scrapped through to be all out for 47 after 21 overs. Pick of the bowlers were Thomas Owens  2/13 off 6, Oliver Smith  4/8 off 6 and Henry McMeeking wrapped up the innings with 2/0 off the last 3 balls of the innings. Into bat Sydenham Youth knocked off the runs in 8 overs. Zabi Miyakhel  21* and Henry McMeeking  16*

9A away to NorthWest today at Burnside High School. NorthWest won the toss and elected to field. Rhys Thyne (60) and Dallas Crowe (57) got the team off to a solid start with a 130 run opening stand into the 24th over. With wickets in the bank the middle order proceeded to put the foot down with Jamie Ehau (34) off 14 balls getting the team total to 251/9 off their 45 overs. On the return leg Jamie Ehau struck first ball with a screamer of a catch at second slip by Ben Breitmeyer. NorthWest put up a reasonable run chase going at 4.5 an over but regular wickets by all the bowlers helped Sydenham to bowl them out after the drinks break for 93. Ben Breitmeyer was pick of the bowlers with 2/8 runs off 2 overs. 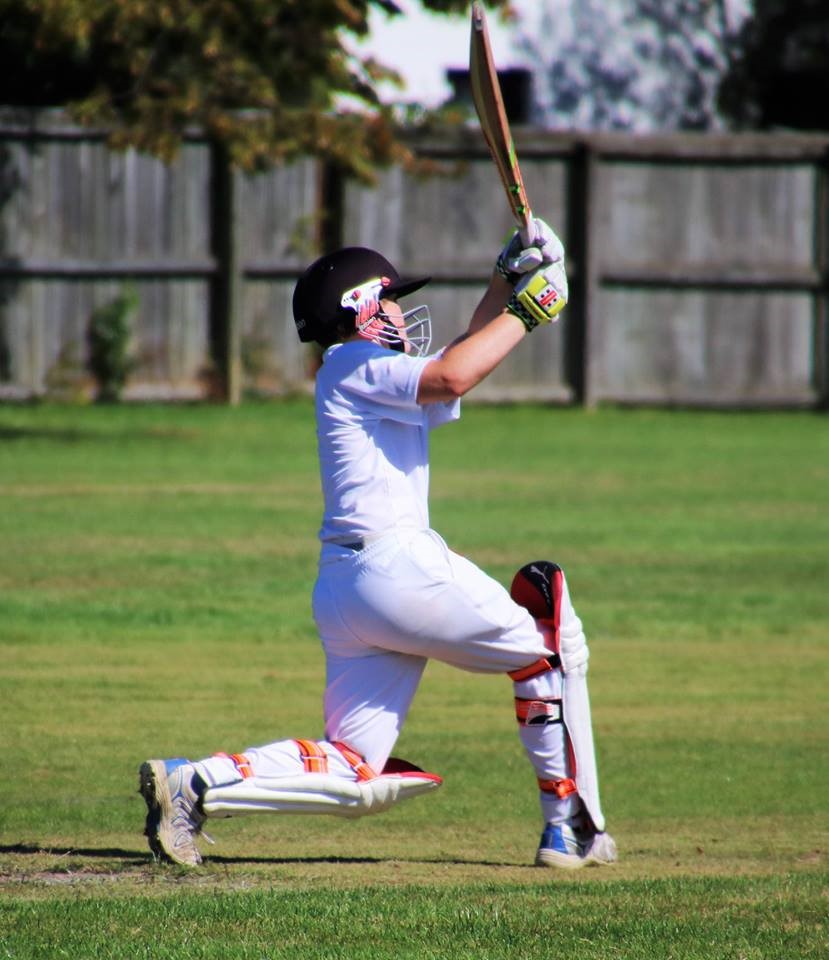 Rhys Thyne hits out in their win against NorthWest

Sydenham played St Bede's Black and won the toss and elected to bowl. We had St Bede's Black all out for 119/10 after 27.5 overs. Our outstanding bowlers for today's game were Duncan Gardener with 2/6 of 2 overs, Liam Wylie 3/8 of 3 overs and Jermone Crichton with 2/3 of 4 overs. Sydenham chased down the score and won the game in the 15.3 over. Our top batters today were James Onslow scoring 52 runs, followed closely by Charlie Johnson scoring 33 runs.

Sydenham played CBHS White at Cathedral College. They won the toss and choose to bat (we wanted to field on a slightly damp and thickly grassed outfield). We had a great start with Fergus Ord taking 3 wickets in his 2 overs. It was tough conditions for batsmen with a very slow outfield, but we bowled well and fielded superbly. Jesse Major took an absolute screamer at gully and I don't think we dropped a chance as we took 7 catches. Catching practice has paid off! Standout bowling was Ryan Pugh 4 runs for 3 wickets and Fergus Ord 2 runs for 3 wickets. Chasing 38 should not have been a problem! Apart from an unfortunate early run out it wasn't, we got there in the 14th over with Max Bassett scoring 15 and extras 17.