Sydenham started the day well on the second day of our two-dayer against OBC at Hagley, after being 67 runs behind OBC’s 1st first innings total of 226, but with 5 wickets still in hand, the objective was to get ahead and declare as quickly as possible.

Finn Loader ensured that’s what happened within the first 15 overs with an aggressively stuck 35 from 33 balls, and along with an equally strong contribution from Skipper Tom Agnew (23 off 28), took Sydenham through to 234 and a lead of 13 runs before the declaration came. 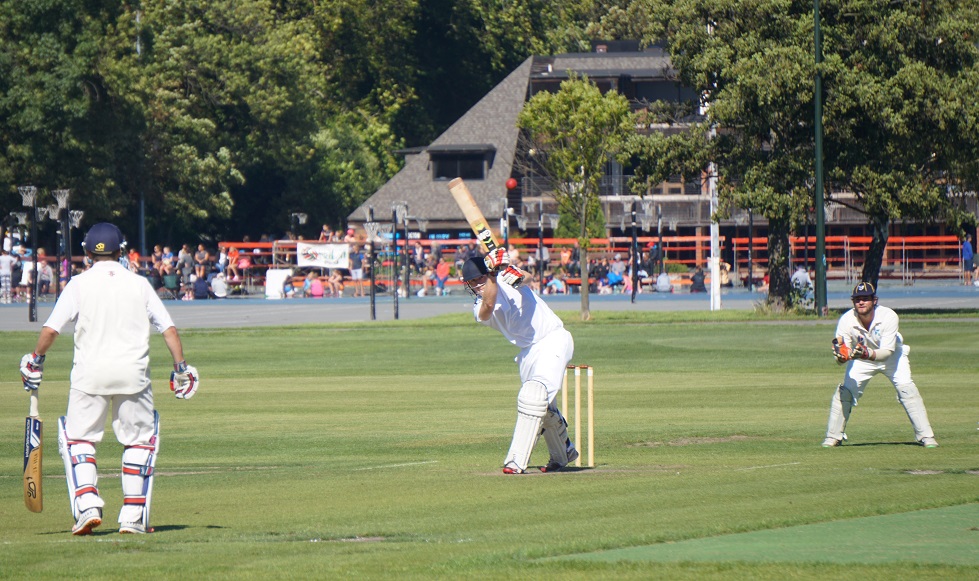 That left the day as effectively a one innings match with the remaining 86 odd overs available to both teams to create an opportunity for an outright win. However, when OBC started their 2nd innings at pedestrian pace it became clear that Sydenham, the team competing for 2nd place in the competition, was expected to do all the work to set the match up. Unable to get an early break through on a pitch that played well throughout the day, the match reached a stale mate mid-afternoon at which point Sydenham were perhaps a touch late in offering easy runs and as a consequence ended up having to chase a total in less time than may have been offered up earlier should OBC the opportunity for more time to bowl Sydenham out. OBC feasted on the easy pickings gifting the OBC No. 5 Stanley 86 off 43 balls, but with the bonus for part time bowler Ryan Jones of being able to pick up a surprise 3-37.

When OBC eventually declared the required chase of 247 at near 8 an over off 32 overs was at best a outside chance, but to have any at all it needed a fast start and some risk taking from the batsman. Unfortunately we didn’t get that with Dylan Goldstone gone at 4 caught on the long-on boundary, Tom Hewison out stumped, and Lane Tuffy missing a straight one whilst trying to accelerate. At 13-3 the shutters went up as Ryan Wallace and Ryan Jones consolidated for a period, but then when they too fell in the space of 10 runs with the score at 56-5, OBC had some encouragement. Finn Loader and Stu Naden (7 off 48) then denied OBC any further advance, and although Stu was dismissed shortly before stumps, his partnership with Finn ensured we survived through to the close at 96/6. Finn completed a good double for the match with his 35 off 92 balls complementing his contrasting innings of 35 in the first.

The weekend’s results saw St Albans take the title with their win over East Shirley, and Lancaster Park and Sydenham still the main contenders competing for 2nd place. Our next and final match of the season is against the title holders St Albans on Hagley 5.

In other matches all womans cricket was cancelled due to the White Ferns match against the West Indies in Christchurch.

Of the others teams that have reported their results:

The 3D Sydenham All Stars will curse not being able to reward Abe Atherton’s excellent 7-20 in their match against Southern Districts at Waltham Park. Sydenham bowled SD out for 176 but then collapsed in reply with only Cameron Hatcher batting at 10 (22 runs) able to make double figures as the All Stars succumbed for a disappointing 44. 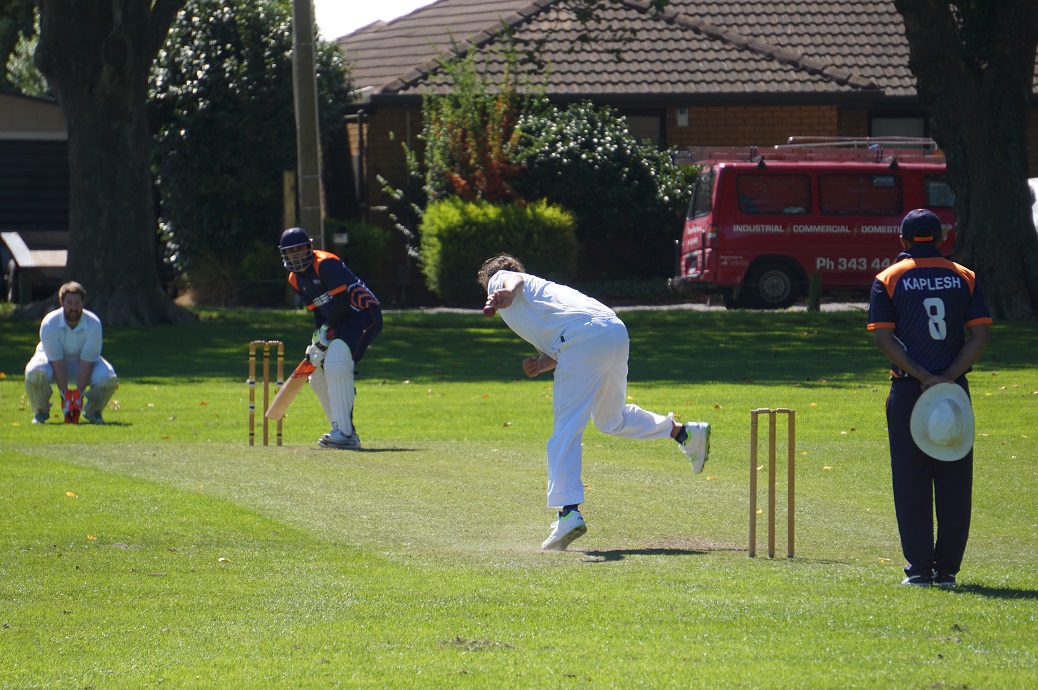 The All Stars at Waltham Park

The 3D Cardinals were the victors in their match against Riccarton on Centennial Park. Batting first Kierran Williams (43), Oliver Philpott (34) and Geordie Dann (20) were the main contributors to the Cardinals score of 132, a total shamefully always competitive on centennial. And so it proved to be with the Cardinals bowling Riccarton out for 124 thanks to Adrian Patchett (3-19), & Oliver Philpott (3-21) who completed a fine all-round match. 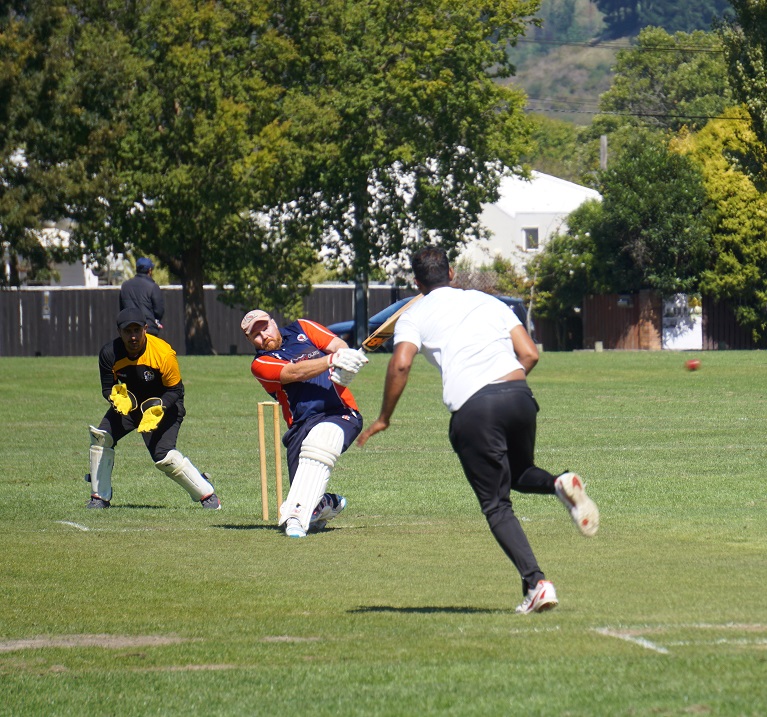 First XI No match detail available at this point but we understand but Sydenham beat St Bedes Fourth XI after being behind on the first innings.

Sydenham met Christs College at Hagley Park today. Originally drawn to play on the Polo Grounds a grass pitch on the College Grounds became available and they happily accepted the offer to play the match on a grass wicket. Sydenham Youth won the toss and asked Christ's to have a bat. At drinks Christ's were approx 80/4 and Sydenham were containing well. Dropped catches probably lose matches and this may have been the case today as Christ's managed to get through to 243/4 off their allocated 40 overs. Ex-junior Sydenham Player James Luxon carried his bat for 40 overs and remained 113 not out (off 127). He was dropped on about 25. A slow tentative start saw Sydenham never really get into the game and were bowled out for 115 in the 33rd over.

The 9A’s played STAC at Cashmere High. After losing the toss and being sent into bat the foundation was laid once again by the openers Rhys Thyne (42) and Dallas Crowe (40). Rather than going into panic mode the teams captain Ben Breitmeyer took things to another level by playing some beautiful cricket shots as well as using brute force to make his maiden century 114* off 64 balls. Joined by our other century scorer from earlier this year Isaac Milne in at number 6 was his usual devastating self with 73 out in the last over of the innings and Issac now has the most runs in the entire year 9 grade. After the break Toby Hull took the new ball down wind with Mahith Mendez bowling his offspin into the breeze. Toby struck in the first over and ended up with 2/19 off his 7 overs and Mahith 2/27 off his 3 overs.

With STAC in trouble early 3/11 after 3 overs their 2 key batsmen Rory Sloan (79) and Jock Rollinson (54) pushed the score upto 140 odd but ultimately once these two were dismissed the game was over, STAC all out for 189 in the 32 over - Charlie Hickey helped clean up the tail with his leg spin ending up with figures of 3/47 off his 7 overs. Excellent work lads that's 5 really impressive wins from 5 games - 2 more scalps left to knock off before the season ends.

Sydenham lost the toss to Christ College 9B and they elected to bat. Sydenham 9B Red battered under par today and we were all out for 99 runs. Our outstanding batters today were Jermone Crichton with 26 runs and Bryce Lukey with 17 not out. Sydenham 9B Red came out fighting but lost the fight in the 21st over. Our top bowlers today were Jacob Tauamiti with 2/12 after 4 overs and Alex Braun with 3/2 after 3 overs. 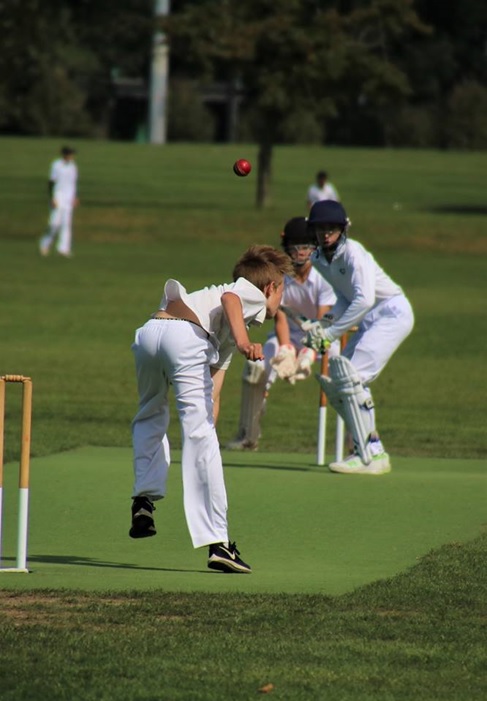 9A Red against Christ College

Sydenham played St Bedes at Polo 5. St Bedes won the toss and choose to bowl. Our openers got us off to a great start. Jack MacDonald  62, Sam Prasad  34, backed up by Jesse Major  42. We ended up 220 for 5 in blustery conditions. We got off to a great start in the cold with two run outs. Zack Howe took two sharp catches as we bowled them out for 74.