The Prems took on the newly installed title holders St Albans on Hayley 5 with Saints keen to complete their season with a rarely achieved seven straight outright victories in winning the championship.

Losing the toss was probably the only thing that didn’t go to plan for Saints on the first day, and that proved little impediment to their plans as their openers got them off to a solid if steady start by putting on 58 for the first wicket. 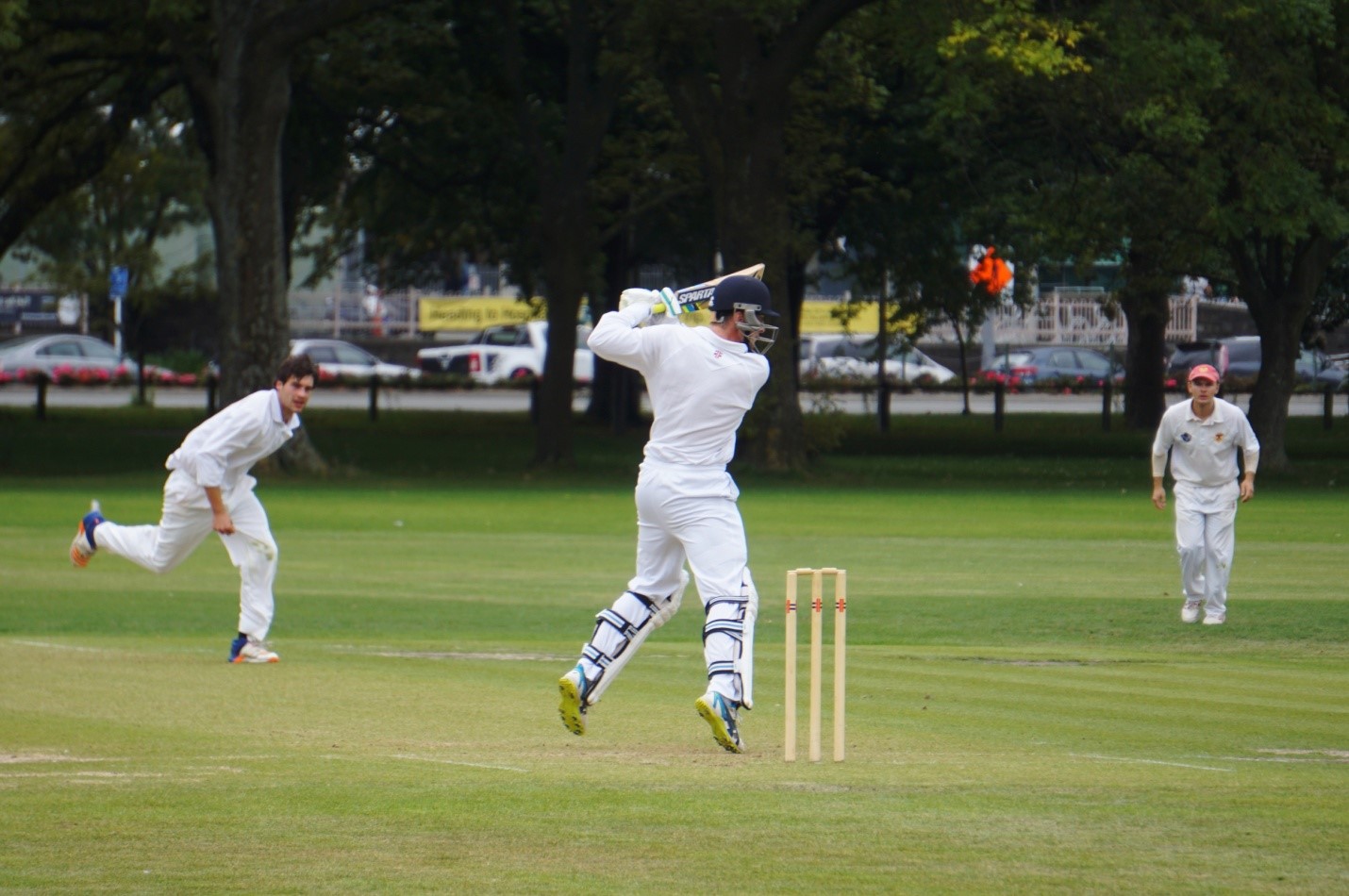 Carl Hooper is cut behind point

With the pitch playing well the batsmen were generally in control but Sydenham did have a good patch when the second wicket fell at 72, and then two more were snapped up within the space of 21 runs to have Saints at 94-4 and the match back in balance. However from there Sharples and Langrope put on 121 for the 5th wicket at a run a ball pace to wrestle the match back Saints way. With the fall of Langrope’s wicket at 214/5, but momentum still in their favour, St Albans backed themselves with an early declaration as they went hunting the outright win..

The Sydenham batting response was disappointing to say the least. Both openers were gone to poor shoots within the first two overs for a total of 6 and thus immediately put the innings on the back foot. Ryan Wallace tried to steady the ship with his 28, but when he fell with the score at 44/4, wickets continued to tumble. Only Carl Hooper  showed any great resolve and technique further down the order with his 30* off 55 balls further evidence that this young man will develop much more into an all-rounder as experience and confidence is gained. 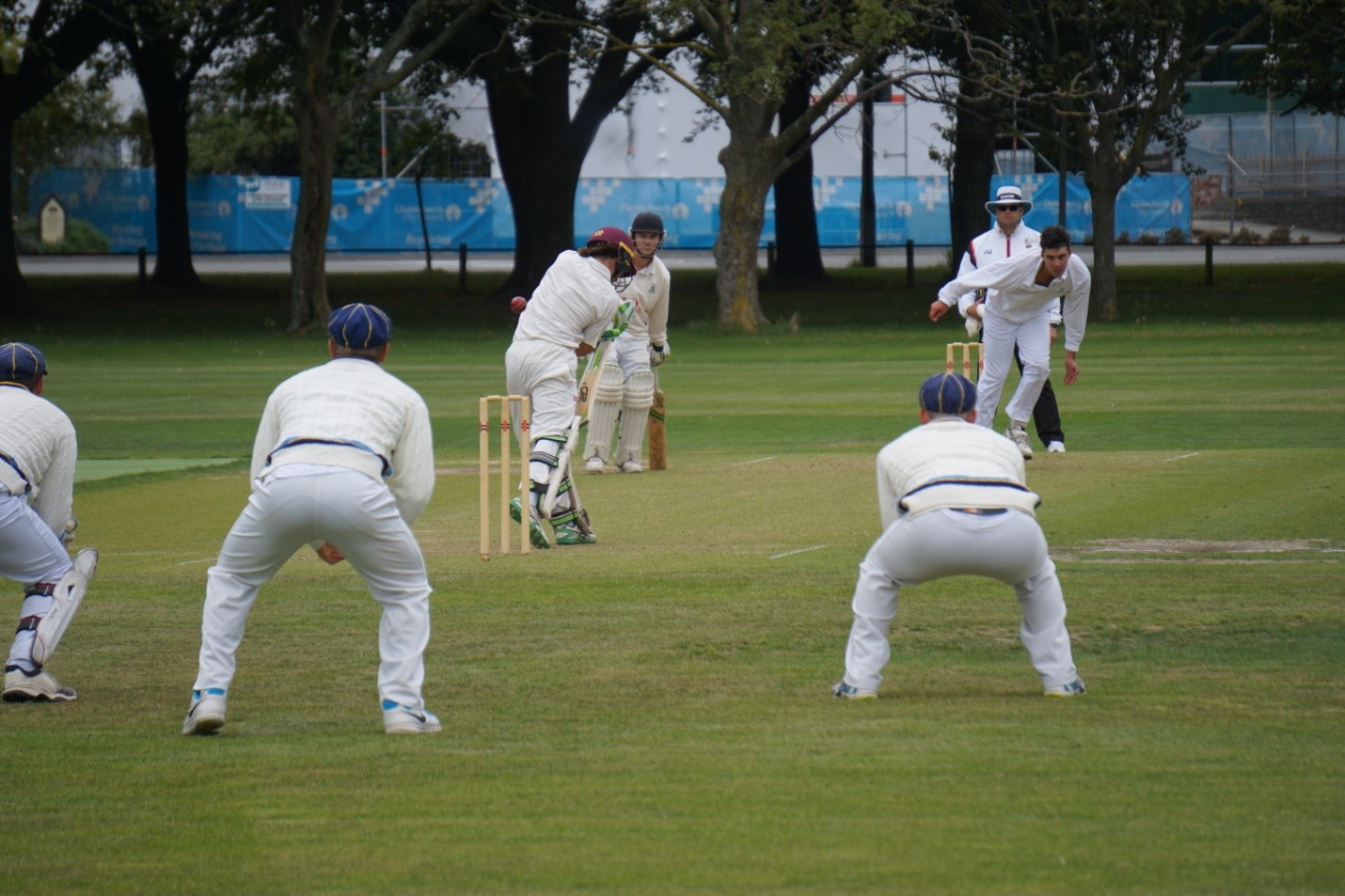 Ryan Wallace beaten outside off stump

At 110/9 and still 104 runs behind Saints 1st inning declaration, four more couldn’t eked out and with plenty of time still to go in the day Saints had no hesitation in asking Sydenham to bat again. 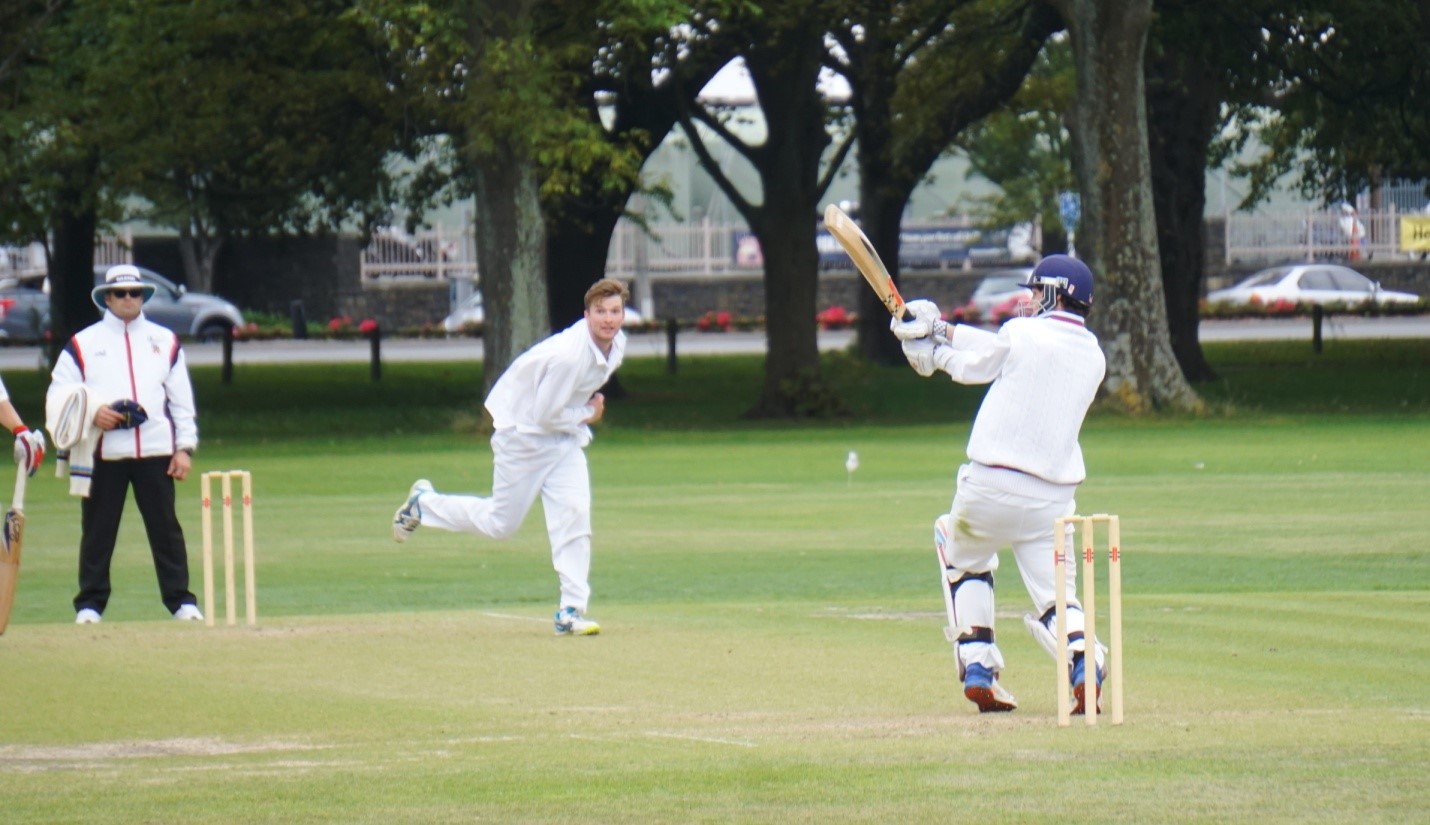 Carl Hooper’s 30* batting at No. 8 was one of the few bright spots on a dull day

Batting again Tom Hewison was lost early to a good delivery, and then Dylan Goldstone a couple of balls later that again gifted all the impetus to St Albans. Cruelly, Ryan Wallace then got a rough decision when he was out for 4 which left Ryan Jones and Finn Loader to bat out the final few overs of the day which left Sydenham 35/3 and still with 65 runs to get to make Saints bat again.

So whilst the odds of an early finish next week look high, some effort by the batsmen next week to make Saints actually work hard to win the match would be welcome.

The Premier Woman clinched victory from the jaws of defeat in their match against competition champions  Lancaster Park at Garrick Park. Sydenham’s 100 all out batting first was largely thanks to Eve Jones with only Isla McKenzie (16) the only other batsman to reach double figures. The Park reply was almost a duplicate of Sydenham’s with a good start and then a collapse that saw them fall short by just four runs when they were bowled out for 96. Wickets were spread around with Carolyn Esterhuizen (2/10) and Eden Pettigrew (2/25) the best of them.

The 2As were in a comfortable position against Lancaster Park played on the Nursey Ground thanks to Hayden Day’s 108 off 155 balls. Batting first on an excellent wicket Hayden and Martin Stretch (51) put on 132 for the 5th wicket after being 66/4 at one stage.

After declaring at 213/9 at the 60th over they then had Park <unknown> and in a position where a couple of good declarations could set the match up for an exciting finish on the final day of the season. 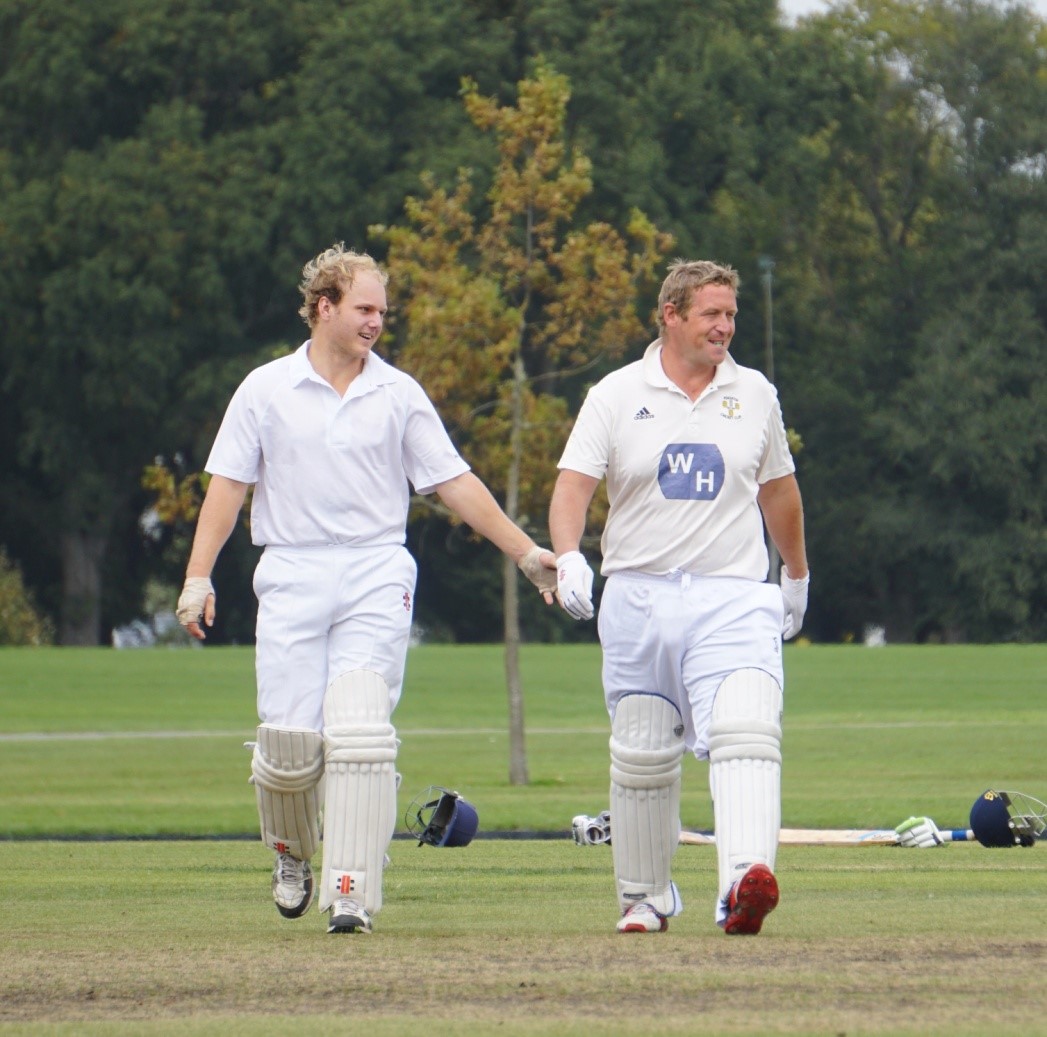 2C Suddenly Sydenham with an outright chance in their competition were unfortunately bowled out for 77 batting first against OBC at Elmwood. OBC then go 178/7 and the first day finished with Sydenham 82/2 in their 2nd innings (Alex 54*)

The 3B Goats lost by three wickets to the Burnside Boomers on Burnside 2. Heath Saunders (33) and Richard McKernan (16) were the main contributors in a disappointing 84 all out, and in reply Burnside got there seven down with Jonny Shaw (3-28) and Chris Douglas (2-19) the best of the bowlers. 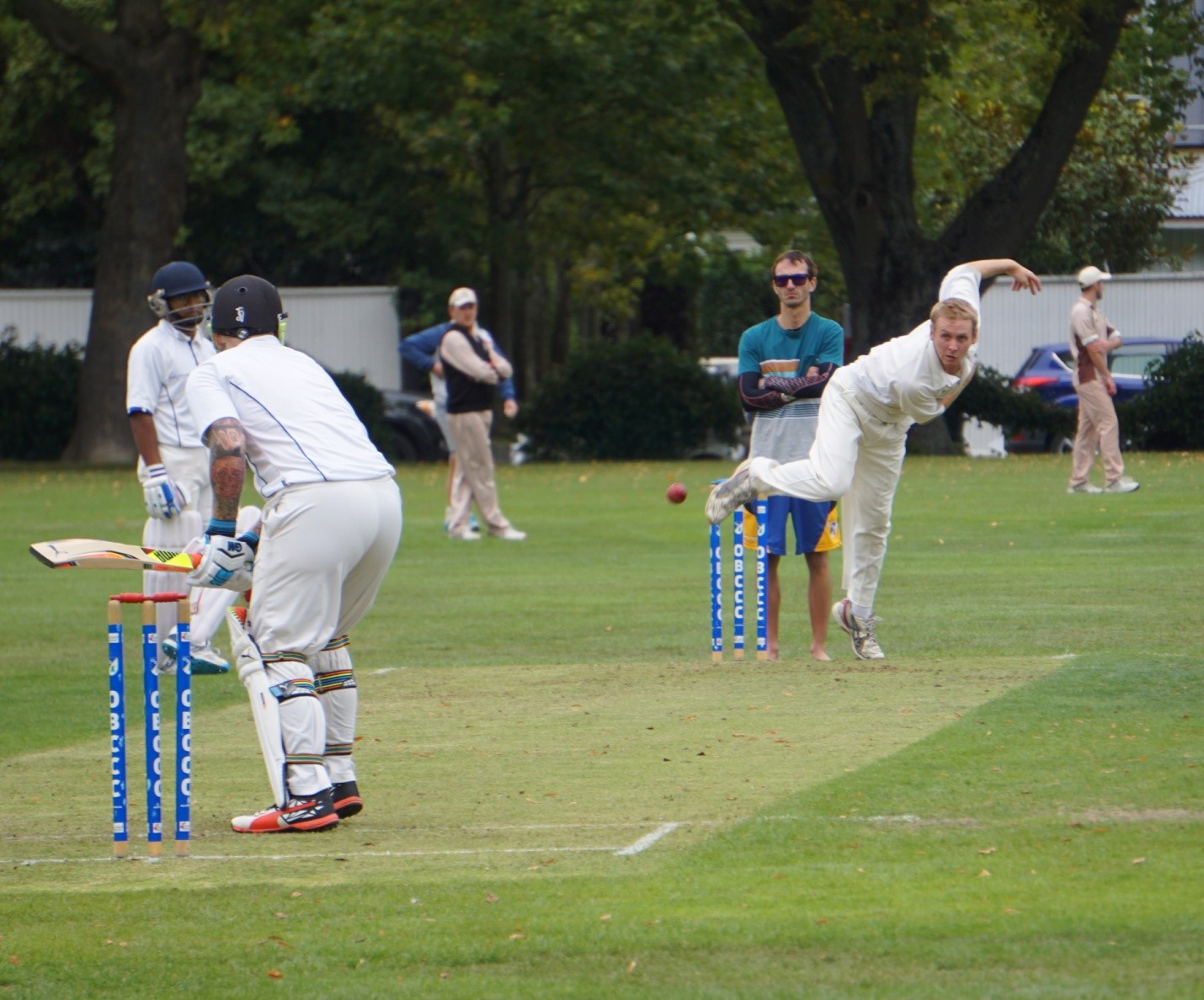 The Presidents Cardinals  provided  Lancaster Park with their first win of the season as they went down to them by 26 runs at Woolston Park despite a fine double from Bert Walker.  Park batting first scored a competitive 185/9 (Walker 3-7 & Jagath Keerthisooriya 2-37) but in reply despite a 34 from Bert and 31 from captain Phil Walker the Cardinals could on get to 159/9 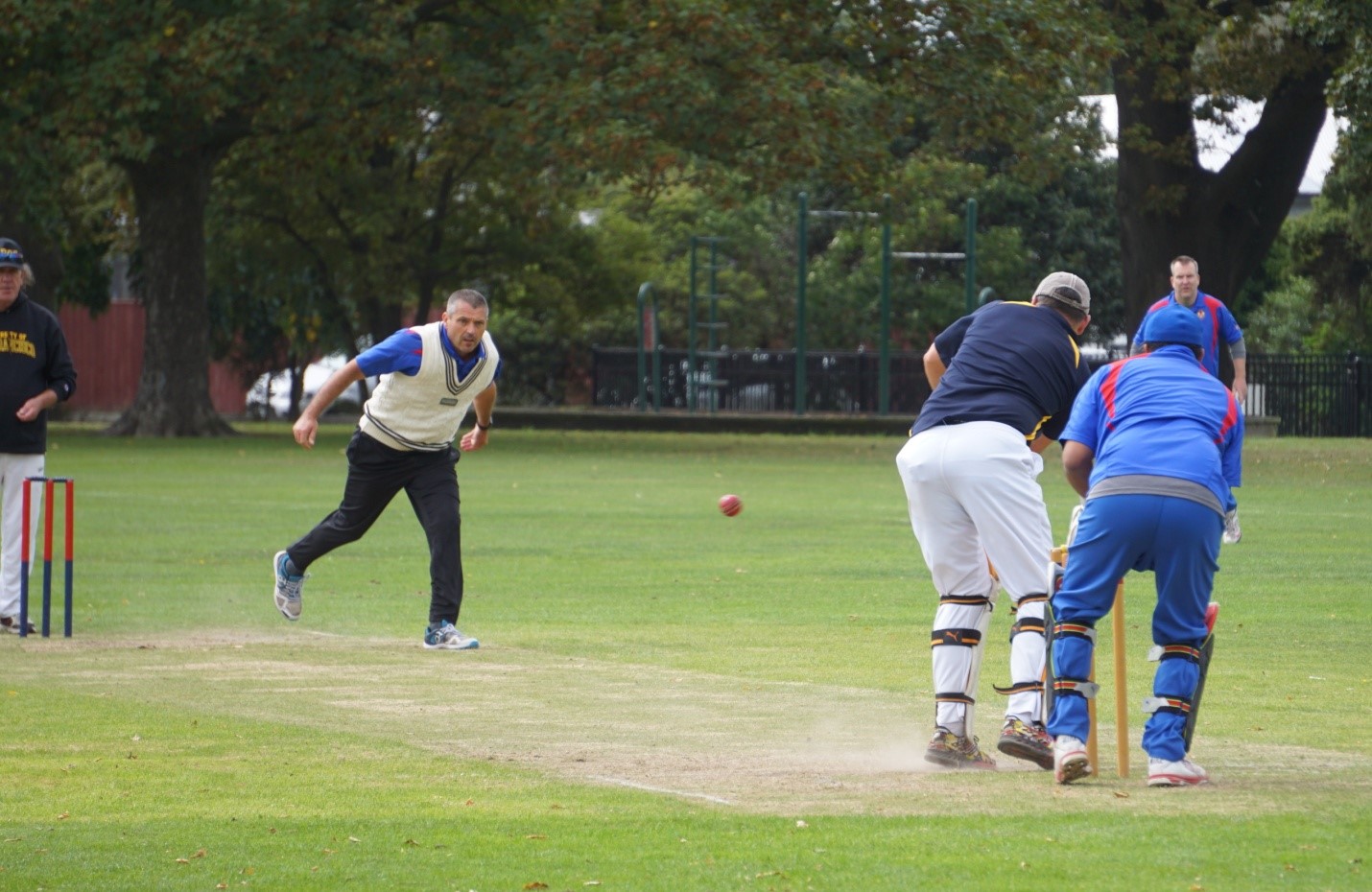 The Hospital boys had a great win over the always hard to beat St Albans Presidents team. After holding Saints to 139/7 in the 1st innings a 49 from Richard McKinlay was largely responsible for getting Hospital past that score for the loss of only four wickets

Division One Women lost by ten wickets to St Albans in a T20 match. After scoring only 51/7 (Linda Pettigrew (38) Saints got the runs without losing a wicket.

Sydenham were put into bat by CBHS 4th XI on day one of their two day match at Cashmere High School.  It was a pleasingly consistent batting effort to get to 217 with many players getting into double figures, however the innings was led by an outstanding 64 by Henry Boyd-Tibbotts, with notable efforts of 32 by Harrison Boyd-Tibbotts and 27 from Archie Goodrick.  CBHS got off to a solid start, but then 8 wickets fell consistently, shared across 5 bowlers (best Archie 2/10, Preetham 2/16) leading to CBHS being 130/8 at the end of play.

Sydenham meet CBHS Blue at CBHS on a artificial wicket. Captain Thomas Owens won the toss and decided to insert CBHS. Early wickets has CBHS 12/3 off 5 overs but some handy partnerships lead by J Stewart (111) saw them get through to 232 all out off 37 overs. Sam Coughlan 4/26 off 8 was unlucky not to get a “5 for” with 2 chances being put down off his bowling. Pat Cameron took 2/13 off 4.

Into bat Sydenham Youth lost their first wicket at 12, but then Patrick Cameron (101* off 90) and Oliver Smith (90 off 58) accumulated and then pummelled a partnership of 199 to get the team through to 211 as they raced each other to a hundred. The winning runs were hit in the 26th over. 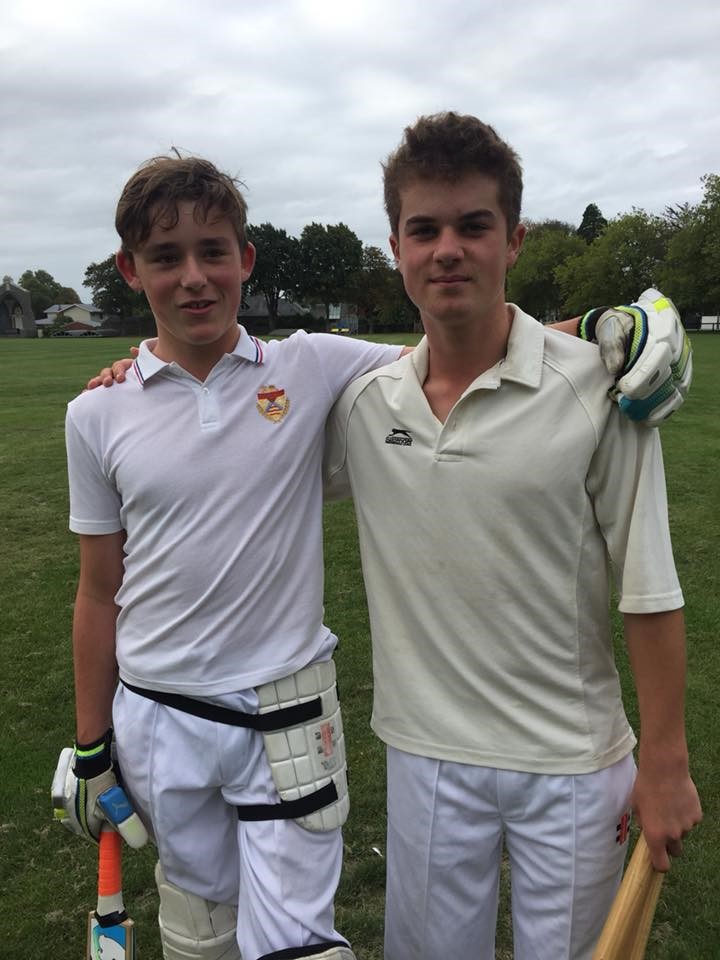 Sydenham, played Christ's College Black at CC’s grounds and won the toss and asked CC to bat first on a sluggish grass wicket. The opening bowlers of Jamie Ehau (3/28) & Toby Hull (1/37) had the ball moving all over the place and kept college restricted to 3/43 at the end of their spells. All the other bowlers had a few overs to try and keep college guessing with mixed results with the ball and in the field ending up giving away 59 extras before bowling college out in the 42 over for 185. Mario Raxworthy had tidy figures of (2/10) off 3 overs

Requiring 4 an over to secure a win and wrap up first place in the comp with a game in hand the openers kept a very talented opening attack at bay getting through to the 10th over on 38 before Rhys Thyne was run out pushing for a second run. Dallas Crowe  34 was doing his best to hold things together but with regular wickets falling around him he was given out LBW with the score on 87 two balls before drinks. A couple of brief cameos by Mahith Mendez (10) and Ben Mason  14* weren't enough to get the team home and the team were all out for 134 - 51 short !!! We now head into the final round still ahead by 1 point on the table and everything to play for against St Bedes

Sydenham played Christchurch boys 9B with the opposition winning the toss and electing to field.

Sydenham lost 2 wickets early so we weren't off to a great start  Our next two batters had a partnership of 101 before the 3rd wicket Charlie Johnson was taken. Charlie got 57 runs.  Bryce Lukey got 96 runs - not out and Jermone Crichton got 29 runs not out.  A great effort. Sydenham left CHCH Boys chasing 213 to win. Sydenham got off to a great start getting our 1st wicket in the 1st over.  We were playing with 9 players and the run rate showed this from CHCH Boys.  They needed 100 runs from 90 balls to win.  Sydenham got the remaining 5 wickets in the last 5 overs with CHCH Boys losing by 17 runs - Jacob Tauamiti 3/20 after 5 overs being the best of the bowlers, Joel Wilson was our wicket keeper for the 1st time and got 3 run outs. Our player of the day was Bryce Lukey for his amazing batting effort.

Sydenham played Christ's College at Polo 5 and won the toss and chose to bat on another cool day.  We lost our first wicket off the first ball, one of 3 golden ducks!.  Tom Newman got his top score of 25 to steady the innings with a useful 25no from Jack MacDonald allowing us to score 155.  However, for the first time this season we didn't use our 35 overs.

We had a great start in the field, having them 13 runs for 7 wickets at one stage.  They eventually crawled to 73/10.  Stand out was Sam Prasad with a fantastic 4 overs, 12 runs and 5 wickets! Special thanks to Archie MacDonald for filling in.