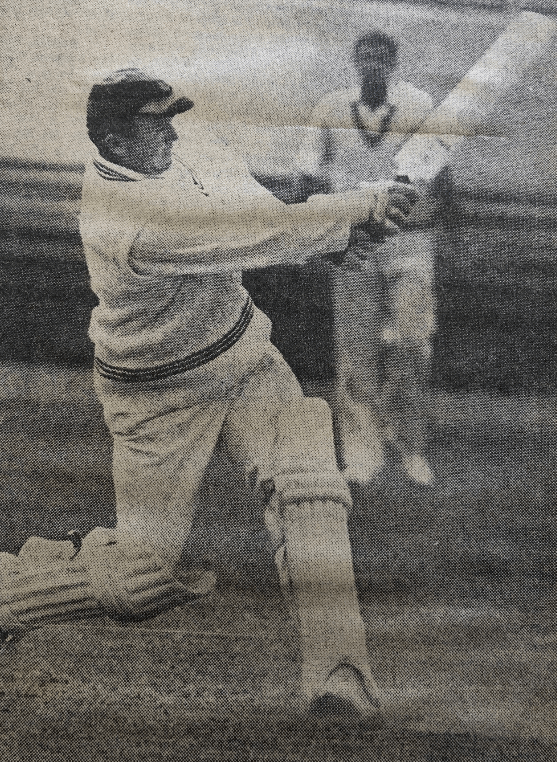 This story is of an outstanding cricketing family that emerged from humble beginnings. From this, Keith played for New Zealand in cricket and hockey.

Keith, the second of four boys, was born in Methven and with his two brothers (Rex and Bill), the Thomson family literally lived a nomadic life with their mobile housing, made up of two wooden units joined together, being dragged by a steam engine about the Mid Canterbury countryside and camping in some benevolent farmer’s paddock. With the young family approaching school age, the Thomsons settled down in Christchurch in Simeon St in Spreydon.

Times were very tough in those post-war years.

Williamson Park was to be the hub of “backyard” sport which saw hockey and cricket share equal priority among the Thomson boys until dusk throughout the year. Out of this upbringing was bred that competitive and determined edge to succeed in sport, and in life, in a Christchurch society that was not always fair. The four boys (Ivan was to arrive some years later) traversed their way through Addington School to Christchurch West High School (now Hagley Community College).

But let us start in chronological order.

Rex is the oldest at 81. He was something of a casual cricketer who played at second grade level for West Christchurch University before playing social cricket for the Naenae Cricket Club until his mid-fifties. Rex excelled at hockey where he represented Canterbury at the senior level.

And to Keith who was born in 1941. There was no major influence on Keith’s cricketing upbringing other than his maternal grandfather who played cricket in the Methven area. Keith was essentially self-taught and everyone who saw Keith bat will remember his unique batting stance. He was of a stout rather tubby physique and, when batting, extremely hunched and low to the ground. This unusual sight would explode into a powerful right-hand batsman who scored all around the wicket. Keith claims it was a “hockey back”, drilled into the Canterbury hockey team by coaching maestro, Cyril Walter, who required sticks being held low to the ground as the player ran. Whatever the reason, it led to significant batting success at club and first-class level and a hockey reputation as a much feared and world class taker of penalty corners. Keith’s first-class cricket career extended from 1959-60 to 1973-74. Despite a couple of seasons when he did not play, he managed five centuries and fifteen 50s in 71 matches. In addition, he played for New Zealand against Australia XI led by Les Flavell before making his Test debut in 1967-68 against India.

R.T.Brittenden, that doyen of cricket writing in New Zealand, wrote in The Press in the 1966-67 season of Keith Thomson after scoring a century in each innings against Otago that “he is a radio commentator’s delight, a newspaper reporter’s dream and, very often, the despair of his faithful Canterbury supporters. With his short legs, barrel-shaped torso and squat neck, Thomson brings that famous character, Billy Bunter, to mind.

The image of a rolly-polly figure is accentuated when Thomson is on strike, for he crouches very low. As the bowlers come closer, Thomson crouches lower and his face contorts so much that his eyes seem to retreat further and further into the slits of his face.

But Thomson is anything but a figure of fun to many bowlers. Somehow, he unwinds from his cramped stance quickly enough to hit the ball tremendously hard and, on defence, his low carriage allows him to get his nose right over the ball.

His strokes are violent rather than classical, but he has a keen eye and is one of the few batsmen in the land who can savage a bowler.

In the field, Thomson is surprisingly quick and a fine catcher around the corner.”

There can be no denying the natural talent, athleticism and power that Keith possessed. Keith had considerable respect for Mac Anderson (cricket) and Cyril Walter (hockey) in their influence on his sporting career.

After Keith retired from playing, he was fast-tracked to first class umpiring status where he stood in 14 matches between 1983-87 and was third umpire in a Test at the Basin Reserve. In hockey, too, he became an international umpire in two Tests.

Keith was made a Life member of the Sydenham Cricket Club in 2016. As a club player he scored 8811 runs including 13 centuries.

And then there was Bill who was born in 1943. He was affectionately known as “WA”. He had a remarkable club career scoring 9,316 runs. He was an aggressive left-hand batsman who, as an opener, would get his team away to a rollicking start. WA was a much-feared batsman who played club cricket until 2004 during which he accumulated nearly 15.000 runs.

Amazingly, he only played two matches for Canterbury despite a glittering career at age-group level in both Canterbury Brabin (Under 20) and Rothmans (Under 23) teams.

His sporting brilliance was highlighted by his selection for New Zealand hockey team at the Mexico City Olympics in 1968.

And to Ivan, the youngest of the four boys.

As in any large sporting family, the youngest sibling’s role was to fetch and carry. Ivan thrived on the competition that existed among those who plied their sport at Williamson Park and, like his brothers before him, he made the Hagley High School 1st XI in both hockey and cricket at a young age. Ivan made the Canterbury Colts at hockey and played adult cricket at mainly the second and third grade level for his beloved Sydenham Club. He continued to play social cricket until his mid- fifties.

However, Ivan has made his mark in club cricket in Christchurch in administration. He has been on the Sydenham Club committee since the early 1980s and was made a Life Member of that club in 2003, the Christchurch Junior Cricket association in 2013 and Christchurch Metropolitan Cricket Association in 2018. He served the Youth Advisory Group of Canterbury Cricket. Put simply, Ivan has been an outstanding volunteer and a strong influencer in his local community.

He established the Sydenham junior Club in the early 1990s with numbers that have grown to nearly 40 teams. He was President in 2007-09, is currently still on the committee. He has been a strong advocate for promoting the women’s game within his club.

Along with his work with the Junior section of the club, Ivan takes considerable pride in the growth and consolidation of the Youth area of the Sydenham club; an area that is providing rich dividends in feeding the adult section.

Tough times can make for tough competitors and the Thomson boys were that in spades. This family has made an outstanding contribution to club cricket in Christchurch and have provided a strong backbone for the Sydenham sporting club scene for over half a century.